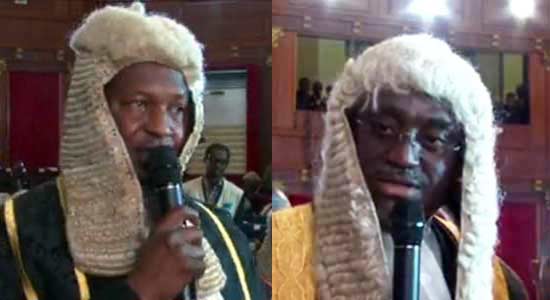 The Attorney General of the Federation (AGF) and Minister of Justice, Abubakar Malami (SAN) and President of the Nigerian Bar Association (NBA), Yakubu Maikyau (SAN) disagreed on Monday on how to ensure enhanced pay and improved welfare for judges in the country.

Malami, who faulted a recent judgment ordering increases in judges’ salaries, said enhanced welfare could only be achieved for judicial officers through the collaboration of the Judiciary and the Executive in accordance with extant legislation.

Maikyau, who noted that the AGF failed to act on a report on judges welfare submitted since 2018, argued that the Executive and the Legislature needed not to be prodded before intervening on the current unenviable state of affairs in the Judiciary.

He said it requires urgent and deliberate efforts by the two other arms of government to strengthen the Judiciary by ensuring adequate remuneration and improved work condition for judges.

They spoke in Abuja at the 2022/2023 legal year ceremony of the Court of Appeal, during which the court’s President, Justice Monica Dongban-Mensem called on both the federal and state governments to help provide decent accommodation for the judges.

Malami said: “I consider it worthwhile to make reference to the recent judgment of the National Industrial Court on this matter.

“While I commend the concerns of the litigant and the legal team to see to the betterment of our Judiciary, this is however, not a basis to ignore extant constitutional and other legal provisions, on this issue.

“The issue of whether salary increment in the public service can be attained in the manner they sought to do, is still open for jurisprudential analysis.

“While two wrongs cannot make a right, it is equally axiomatic that where a statute has provided a specific manner for doing a thing, no other manner resorted to will be valid,” he said.

Malami, who hailed President Muhammadu Buhari’s administration for improving on budgetary allocations to the Judiciary, said the government would soon unveil a new welfare package for judges.

Maikyau noted that the existence of a strong and independent judiciary is critical in the attainment of the state of affairs where justice would not only be present, but also be seen to be present.

The NBA President added: “Let me say that one demonstrable way by which the government will show sincerity in the bid to recover and develop this nation, is to deliberately invest in the welfare of judges and Justices by strengthening the human capital within the justice sector and meeting all the infrastructural needs of the judiciary.

“I also call on the Federal Government to revisit the 2018 Report of the Committee on the Review of Judicial Salaries and Conditions of Service, to bring same in tune with our present-day realities and give effect to the final recommendations that will arise therefrom.”

“This is my call on the Federal Government and it should be addressed as a matter of urgency.