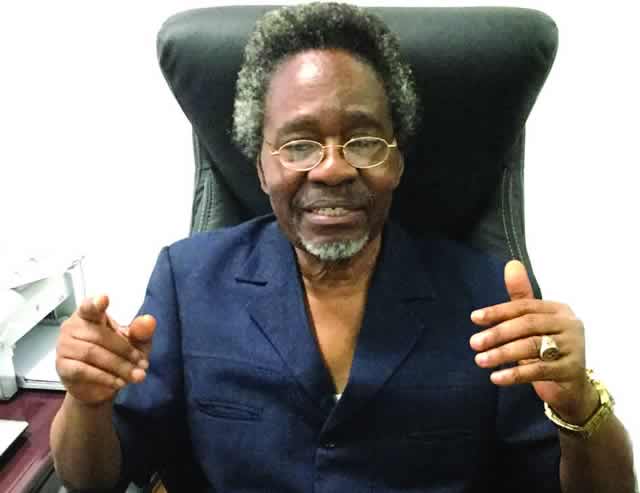 Professor of International Law and Jurisprudence, University of Lagos, Akin Oyebode, has warned that “If drastic measures are not put in place urgently to contain it, corruption might ultimately result in the mortality of Nigeria as a nation-state”.

Oyebode spoke on Thursday at a roundtable organized by Aoxio-Wconomix Rights and accountability Project (SERAP) in collaboration with the National Endowment for Democracy (NED) and held at the CITIHEIGHT Hotel, Sheraton Opebi Link Road, Ikeja Lagos.

Delivering a paper On Strategies for Mobilizing Mass Action to Demand Anti-Corruption Reforms and an End to Impunity for Grand Corruption in Nigeria insisted that “mass action by the citizens is urgently needed to put pressure on authorities to end impunity for grand corruption in the country.”

According to him, the people must be enlisted in the war against corruption. Nigerians should start anti-corruption clubs in schools, radio jingles should be put in place to fight corruption, carry placards, go outside, organize sit-ins like SERAP is doing presently, Nigerians should be mobilized against corruption and now take their destiny in their hands. The fight should not be left alone to organizations like SERAP and when the State wants to attack organizations like SERAP, the masses should fight for them.”

Oyebode also said: “The recent attempt by the National Assembly with the NGO bill to control, monitor and eventually sequester CSOs all because of the excuse that some CSOs are corrupt should not be allowed. Cutting off the head is not the cure for a headache, the bill is an overkill. If they cage organizations like SERAP, who will fight for the masses. The government does not want anybody to act as an impediment to their thievery activities.”

The Attorney General of the Federation and Minister of Justice Abubakar Malami SAN who was represented by his Senior Assistant Abiodun Aikomo said, “The disconnect between our prosperity and where we are is corruption. We have to be patriotic, only Nigerians can do something about corruption. To file paper in court, you have to shake body. Corruption as unfortunately attained legitimacy in Nigeria, we are all encouraging corruption that is killing us. Imagine a million citizens fighting against corruption, we have a government committed to the fight. Let us all fight it and shun greed”

Human rights lawyer Femi Falana SAN in his contribution said that: “We must stop our lawyers from terrorizing our courts and judges. We must get our judges to take charge of their courts.”

According to Falana, religious leaders should stop confusing our people. Our churches and traditional rulers should stop praying for thieves. This is how low we have sunk. What are we as individuals doing to stop these politicians, let’s start with Lagos, let’s start asking our legislators how much they are being paid for doing what? Let our church stop conferring honours on criminals. Also, our universities should be encouraged to join in the fight.”

All participants committed themselves to promoting an end to impunity for grand corruption in the country by among others, ensuring the effective prosecution and jailing of high-ranking corrupt officials and securing recovering of stolen public assets.

Oyebode’s paper reads in part: “It is not enough to have fanciful anti-corruption laws. More important is the need to get the generality of the popular masses wedded to the crusade in order to make it a success. The reticence and lethargy of our people generally would need to be confronted. Without the cooperation and collaboration of generality of the people, the anti-corruption bodies might end up little more than paper tigers.

“The legality or validity of the anti-corruption war is not in doubt. However, the practical implementation of the relevant laws is fraught with considerable difficulty, not least, the extent to which the generality of the populace is at one with the government. Jurisprudentially speaking, validity is a question of imputation while efficacy is more a matter of fact or causation. Accordingly, it is imperative to consider the role of the people in relation to the struggle to contain corrupt practices.

“It is on record that Nigeria has a set of anti-corruption laws reflecting the will and intention of the government to battle the virus to the hilt. However, the efficacy of anti-corruption legislation, coupled with judicial pronouncements and conviction and sentencing of corrupt elements would require the complement of mass action and commitment arising from general awareness and resolve to collaborate with on-going efforts. Inevitably, government action in this regard must be undertaken for the anti-corruption struggle to bear fruit.

“It is hardly an exaggeration that corruption has levelled, perhaps, the most virulent attack on Nigeria’s bodypolitik. Despite all the hue and cry over the debilitating consequences of corruption on the country’s socio-political fabric, it is sad but true that the virus has continued to fester in leaps and bounds. The sad situation today is that despite its pernicious nature, corruption seems to have found a comfortable nest in the lives and consciousness of many of our people, thereby giving the false and erroneous impression that Nigerians have generally accepted it as a fact of life.

“To the extent that Nigerians take the saying that there is no free lunch literally, the culture of the customary gift or dash, jara, egunje, etc, have been internalized among the population so much so that there is little surprise if and when a Nigerian evinces corrupt practice in the form of bribe-taking, over-invoicing and kindred under-the-table dealings. There are even popular sayings approving of all manner of unjust enrichment at the point of duty.

“In a country where a President could once declare that stealing was not corruption, the most important Commandment would seem to be the Eleventh: Thou shall not be caught or found out!

“In Nigeria, there is a plethora of laws against corruption and related manifestations of the “ugly and unacceptable face of capitalism.” Aside from the Criminal and Penal Codes, the Corrupt Practices and Other Related Offences Act, 2000 laid the ground rule for combating the odious crime.

“The establishment of the ICPC, EFCC and Code of Conduct Tribunal as well as promulgation of the Anti-Money Laundering Act and designation of special courts to handle cases of corruption in addition to the establishment of a scheme for whistle-blowers and witnesses protection are clearly pointers to the resolve of the Nigerian government to aggressively confront the ogre of corruption.

“Perception is an important factor in the efficacy of law generally. Therefore, a lot of work still needs to be done concerning the extent of popular understanding of requisite anti-corruption legislation and appreciation of the commitment of the government to its anti-corruption programme and policy. This necessitates broad mass enlightenment on the various laws with a view to eliciting the understanding, support and collaboration of the masses of the people.

“The people must be made aware of the nexus between corruption by the political leadership and their niggardly circumstances. Once they realize that misappropriation of the nation’s resources by leaders at various levels leads to their impoverishment, their approval and support for all measures adopted to contain graft and unjust enrichment within the polity become pretty well assured.

“The people must be enlisted in the war against corruption by encouraging them to engage in mass action through their participation in mass rallies, street demonstrations, public debates and write-up in the mass media against corrupt practices. More anti-corruption clubs need to be organized in the schools and higher educational institutions to collaborate in waging the anti-corruption struggle.

“However, it would seem that no better encouragement and sensitization against corruption exist more than the palpable resolve of the government to take decisive action against those who have been proven to violate the laws and social ethos against the odious and unwholesome practice of corruption. By effecting prompt and adequate sanction against acts of malfeasance, the anti-corruption crusade would win new and more committed converts among the population.

“Religious bodies, churches and mosques should not be left out of the anti-corruption crusade. The leaders of religious organizations should be encouraged to be at the vanguard of the campaign against corrupt practices, more so as they exercise tremendous influence and impact among their various congregations.

“It is my considered opinion that the effort to contain corrupt practices should no longer be seen as just that of the government. Of equal if not, in fact, a more important role is that of society which needs to be on the same page if the anti-corruption war is to succeed. Admittedly, no country has been able to wipe out corruption in its entirety but there examples of countries where the vermin has been curtailed to its barest minimum.”