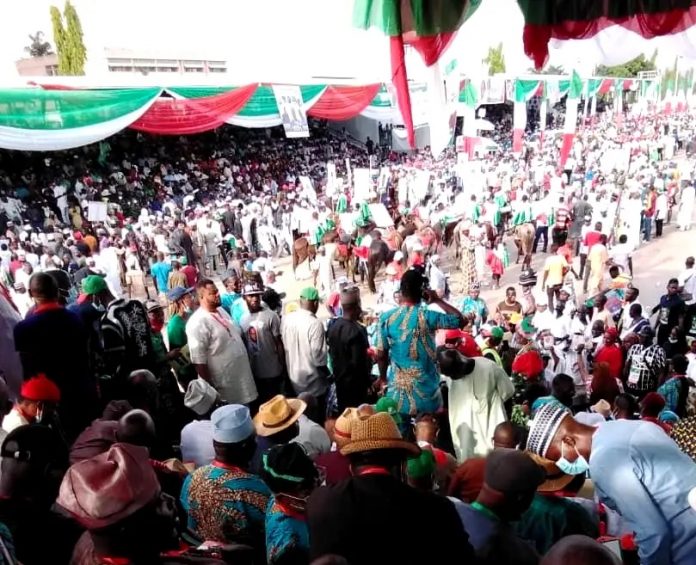 *How they outmanoeuvred Atiku, Saraki, Lamido

With the outcome of the national convention of Peoples Democratic Party, PDP, governors elected on the platform of the party have taken firm charge, and are primed to decide who will fly the party’s presidential ticket in 2023.

They produced all those elected at the convention.

Indeed, former Vice-President, Alhaji Atiku Abubakar ex-Senate President, Dr. Bukola Saraki and former Jigawa State Governor, Sule Lamido, may have had a foretaste of what awaits them in their rumoured 2023 presidential ambitions.

At the just-concluded national elective convention of the PDP in Abuja; governors showed their might as they literally hand-picked members of the next National Working Committee, NWC, and other national officers of the party.Atiku, Saraki and Lamido, did everything possible to drum support for Olagunsoye Oyinlola who vied for the office of Deputy National Chairman (South) against Taofeek Arapaja.

Arapaja, a former deputy governor of Oyo State, rode on the support of the PDP governors to the convention, as entreaties made to Oyinlola to step down failed.Two hours before balloting, Atiku, Saraki and Lamido went to state pavilions to woo delegates to support Oyinlola.

The move, according to findings, was aimed at neutralizing the influence of the governors who have since taken hold of the party following the ouster of former chairman, Prince Uche Secondus. But it turned out an exercise in futility as Arapaja polled 2,004 votes to beat Oyinlola, who got 705 votes.

A member of the outgoing NWC said in confidence that with the feat, the governors have announced themselves as the undisputed owners of the party.“Atiku and Saraki should realize that their time is over. If they want to pursue their 2023 ambitions, the governors would have a big say.“What it means is that without the support of the governors, you can’t win a big position in the PDP of today. This is the message I think everyone took home from this convention,” he said.

Like in 2017 when her bid to become the PDP deputy national chairman (North) failed, former Women Affairs Minister, Maryam Ina Ciroma, again failed to realise her ambition as she lost to Ambassador Umar Iliya Damagum.

The 13 governors elected on the platform of the PDP, Vanguard learned, had pleaded with Ciroma to shelve her ambition to give room to the emergence of Damagum as consensus candidate.

After entreaties to her failed, Ciroma headed for the convention with confidence but the governors made their influence count as Damagum polled 2, 222 votes to emerge Deputy National Chairman (North) while Ciroma garnered 365 votes.

One striking feature of the voting pattern of delegates was that they all voted uniformly for the consensus candidates handpicked by either the governors or their associates.

The story was the same for unopposed Umar Bature, Okechukwu Daniel, Daniel Woyegikuro,

and Mohammed Suleiman, as they became members of the NWC after polling 3,426 votes each to emerge National Organizing Secretary, National Auditor, National Financial Secretary and National Youth Leader of the party respectively.

Like in 2017, the PDP governors compiled names of their preferred candidates, all of whom emerged victorious at the convention.

Meanwhile, National Chairman-elect of the PDP, Dr Iyorchia Ayu, has taunted the All Progressives Congress, APC, for what he called their inability to conduct successful state congresses, let alone a national elective convention.

In his remarks shortly after Governor Ahmadu Fintiri pronounced him elected chairman of the party, Ayu took the APC to the cleaners, blaming it for the sundry challenges the country is facing.

“I believe the other party can never hold a convention because even in states, they cannot hold congresses.

“They have produced 92 state chairmen for 36 states, how can they hold a successful convention which the PDP has done? We are waiting for them.

“This is a challenge to them. This is a quit notice for them. PDP is back and is taking back the country to develop it.

“I want to sincerely appreciate the PDP family. Today is simply a thank you address. When we started this party 23 years ago, we never in any way imagined that the journey will get us to this stage, a stage   where we ruled for 16 years.

“We went into rough times, but for anybody who bothered to see, PDP is back to rescue Nigeria from the terrible mess we have been in the last six years.

“I want to appreciate all of you who have taken time as delegates, observers, supporters, and members of the media as well as security services who have made this event such a wonderful event.

“Many people imagined that this convention will lead to the break-up of the PDP. Those who dream like that are dreaming in wonderland. Their dream was misplaced.

“Those who have lost hope should know that Nigeria is not a divided country. A small group of people decided to divide Nigeria.

“PDP will come back, unite our people, put them together, North and South, East and West. We will move ahead to develop this country. We did it before, we are going to do it again,” he said.

Indeed, former Osun State Governor, Prince Olagunsoye Oyinlola said the new NWC has the capacity to return the PDP to its glorious era.

Prince Oyinlola, who lost the Deputy National Chairmanship of the party to a former deputy governor of Oyo State, Ambassador Taofeek Arapaja had earlier sent a private message to Arapaja congratulating him on his victory and wishing him a successful tenure.

Arapaja has also acknowledged the message with appreciation.

In a general message issued to the new PDP leaders-elect, Prince Oyinlola, while describing the success of the national convention of the party as a good omen for Nigeria and Nigerians said he is confident the party is in very good hands.

“I thanked the founding fathers, all party leaders and my supporters across the country for the strength of their support for me and their love which they radiated around me throughout the contest.

“I also laud the PDP Governors Forum for holding the forte of the party and I pledge to continue to play my role as a leader and strengthen my support for the PDP and its organs,” he said.

Politicking is over, it’s time to rescue Nigeria — Arapaja

The Deputy National Chairman-elect (South) of the People’s Democratic Party, PDP, Ambassador Taofeek Oladejo Arapaja has said that politicking is over in the party and it is time to rescue Nigeria.

In a statement made available to Vanguard in Ibadan on Sunday, Arapaja noted that it is time to set aside all differences while party members wholeheartedly work for the party.

He added that all members must begin to appraise all the past events and activate all necessary machineries on the journey to have formidable party with one mission to rescue Nigera .

“Worthy of note is our collective decision to speak in one voice while choosing new sets of people who will through their productive styles of leading rescue Nigeria from shackle and manacle of oppression.

“Understandably, we are in human institution where premium is placed on democracy, contest will come, winners would emerge while administrative and political works will commence.

“Permit me to state that, politicking is over and it is time to set aside our differences while we wholeheartedly work for the our party.

“We must however begin to appraise all the past events while we activate all necessary machinery on our journey to have formidable party with one mission to rescue our dear country,” he said.

Also, Governor Ifeanyi Okowa of Delta State has said that the PDP will come out of the national convention of the party united and strong, keeping its agenda to rescue Nigeria alive.

Speaking at a dinner he hosted for leaders, delegates and stakeholders of the party from Delta at the Governor’s Lodge, in Abuja, Okowa  said that all the party’s positions formerly zoned to the North had been zoned to the South.

He said; “as we speak today all the positions in the North has been settled with one aspirant to a position.

“The case of Anambra has been resolved; South-East and South-South also resolved but the Deputy National Chairman (South) is still a thorny issue.

“On our part in South-South, Financial Secretary and National Woman Leader were zoned to Bayelsa and Cross River states.

“Deputy National Organising Secretary was zoned to Delta and after due consultations we have endorsed Senator Ighoyota Amori for the position.

“By the grace of God we will come out of the convention united and strong to keep our rescue mission agenda alive.

“As you return to your various local government areas, let’s work hard to galvanize our people to register for the ongoing Voter Registration and our party’s e-registration exercise.”

Okowa said he was delighted at the turnout of delegates and leaders of the party from all the local government areas for the convention, noting that a lot of work had been done to stabilize the party in the country.

In a vote of thanks, Senator Ighoyota Amori appreciated the party for the privilege given to him to serve, and particularly thanked the governor for making it possible. He assured that he would not betray the confidence reposed in him.