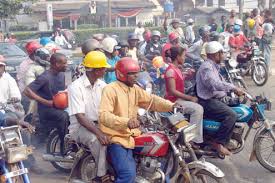 Controversies have begun to trail the federal government’s plan to place a ban on motorcycles across the country.

Newswirelawandevents recalls that after the Federal Executive Council meeting on Tuesday, Attorney General of the Federation and Minister of Justice, Abubakar Malami, told Journalists at the state house that the government was considering a ban on Motorcycles, claiming it was being used to commit crimes across the country.

However, some Nigerians who spoke to our correspondent, in Kaduna on Saturday, said the federal government has deviated from arresting and prosecuting the main financiers of terrorists, bandits and Boko haram and has now moved to punish the poor masses who have no means of livelihood but rely on motorcycles to feed, clothe and provide for their families.

They alleged that the APC-led government always target the poor masses, rather than arresting the rich who use criminals to terrorize the poor and in most cases kill them through banditry.

Bola Ahmed, District Head of Kujama, Kaduna in his lamentation said, “Our children use motorcycles to feed us. They have no business with bandits. In most cases, the bandits trekked several kilometres to attack our people.”

He said the banning of motorcycles will have no effect on bandits because even those terrorists using motorcycles, are using them inside the forest.

Mr. Yunusa Madaki noted that the federal government will only suffer the innocent masses if it bans the use of bikes because bandits will still use their motorcycles, parked a few kilometres, before attacking residents. If they kidnap, they trek for kilometres to where they parked before they move on.

Mrs. Rhoha Acheneje who was a victim of bandits attack told Newwirelawandevents that all instruments, including motorcycles, guns are within the forest.

She asked the government to set up Special Squads that will move to the forest, and recover all those exhibits.

Didam Auta said the motorcycle ban will affect poor people more, as they will trek to the market, carry their foodstuff on their heads. Even civil servants find it difficult to reach their respective offices.

” In cases of emergency, those in interior villages seek the help of Motorcyclists to convey their sick ones or pregnant women to the hospital. Once banned, many Nigerians will suffer.” He said.

Muslim-Muslim Ticket: My reference to Pope, a mark of reverence, not ridicule – Gov Lalong