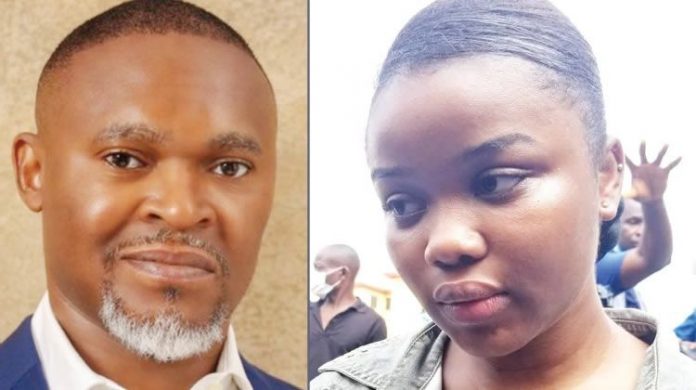 A Lagos High Court sitting at Tafawa Balewa Square on Tuesday watched the video recording of the lifeless body of the Chief Executive Officer of Super TV, Usifo Ataga, allegedly murdered on June 15, 2021.

An undergraduate, Chidinma Ojukwu, and one Adedapo Quadri are standing trial for Ataga’s murder.

They were arraigned alongside Ojukwu’s sister, Chioma Egbuchu, accused of stealing Ataga’s iPhone 7.

Ataga’s body was seen in the video lying on the ground facing up, with his hands spread.

He was wearing a white singlet and boxer’s pants stained with blood.

His head was close to a wall at the short-service apartment where he was allegedly murdered.

There was blood on the floor. Blood also stained the pillow and duvet on the bed in the room.

In the same Compact Disc, a video showing Ojukwu narrating how she murdered Ataga was played.

In the video, Ojukwu narrated that she met Ataga through a friend.

She said that, on June 13, 2021, the deceased called her and asked her to get a place for them to stay, and she got the short let service apartment where the deceased died.

She said: “After I got the place on Sunday, we were smoking loud, drinking, watching movies

“Then, I went to get food, the drug we were taking got finished and I ordered another one and went downstairs to get it from the delivery guy in the morning.”

The first defendant said the above-mentioned incident occurred on June 14, 2021.

”Then, on Tuesday, we drank, smoke loud and I added Rophynol to his drink. We had sex, and I was on the bed and he was on a chair.

“Later, he started disturbing me for more sex. I was tired, and after struggling with him, he had his way and still wanted more.

“He was no longer himself, and I thought he was no more interested in sex, only for him to return to the bed to ask for more.

“I pushed him away which resulted in his hitting his head against a stool that had a glass, he had a cut on his leg and he became weak.”

Ojukwu said that she then took a knife and stabbed Ataga on the neck, ribs and stomach, so he would not be able to harm her.

“I tied his hands with a handkerchief. His blood was out and I was scared. I just packed everything, my clothes were also stained with blood, I just packed my things and left.

When she was asked in the video if she was assisted in killing the deceased, Ojukwu said, “There was nobody that assisted me, I did it alone.”

When asked why she didn’t call for help, she said, ”Obviously I was scared, that was why I left.”

She said that there was no motive for killing Ataga.

In the video, the ninth prosecution witness in the murder trial, DSP Olusegun Bamidele from the Intelligence and Tactical Unit of the State Criminal Investigating Department, Panti Yaba, was seen in interrogating Ojukwu at Panti.

He also asked her why she was using a foreign phone number and the motive behind her hiding her phone number.

Ojukwu said that she already had a foreign number registered on social media which she used to chat with people.

Asked why the owner of the service apartment didn’t know her identity, she said, “She didn’t ask for my identification.

“If she had said that the place was not available I would have left for another place.”

Ojukwu responded to a question in the video about why she used Mary Johnson to open a bank account. She said that she was attempting to open an account number which got blocked.

On an Identification card she procured, Ojukwu said, “It was someone that did it and you can’t see his face.

“I don’t know the contact of the person. I was just going through the internet and I saw a contact to call.”

She also said in the video that she opened a domiciliary account for depositing dollars.

At this point, prosecution counsel, Adenike Oluwafemi, reminded the witness of his evidence on May 10, when he said that he recovered some items from the defendant’s house.

Bamidele responded by listing the things he allegedly recovered from Ojukwu’s house.

Other items, according to the witness, are three other cards that had the deceased’s name and six blank complimentary cards.

After identifying the items, Oluwafemi prayed the court to admit them in evidence.

However, Ojukwu’s counsel, Mr C.C. Ezebube, objected to the admissibility of the items.

Quadri’s counsel, Mr Babatunde Busari, and Egbuchu’s counsel, F.O. Ilesunmi, did not object to the tendering of the items in evidence.

In a ruling, the judge dismissed the objection and admitted the items in evidence.

Earlier, the witness showed the court some pictures of the apartment where Ataga was allegedly murdered.

The three defendants were arraigned on October 12, 2021, on a nine-count charge brought against them by Lagos State Government.

Ojukwu and Quadri are facing the first to eight counts bordering on conspiracy, murder, stabbing, forgery, making of bank statements, and stealing.

The third defendant, Egbuchu, is facing the ninth count – stealing of an iPhone 7 belonging to Ataga.

Ojukwu and Quadri are alleged to have conspired and murdered Ataga on June 15, 2021, by stabbing him several times with a knife on the neck and chest.

The case was adjourned until Wednesday for the continuation of trial.