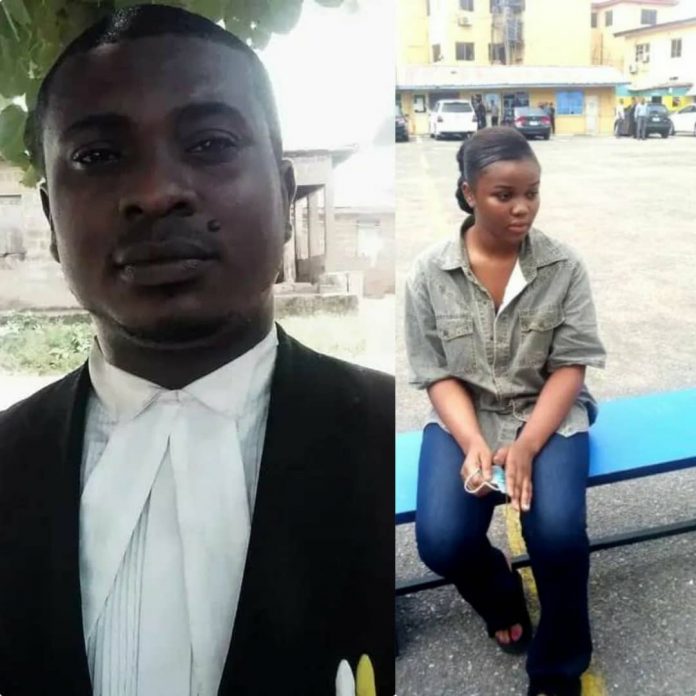 I can defend her and get her sentence reduced to less than 10yrs imprisonment.

Now, you guys must understand that I am writing this in my capacity as a lawyer. We don’t show feelings in things like this. First, the law does not permit you to kill another. But if enough excuse exists to justify the killing, then you will not be sentenced TO DEATH for murder, but you may go to jail for a few years for manslaughter.

In this case, Chidimma has two main defences that she can explore. I don’t want to go into the two of them. I want to talk about the defense of SELF-DEFENSE. Yes, self defense can avail her at the trial.

These are my reasons.

The man in question is a 50yr old man while Chidimma is only a tender girl of 21yrs. By merely looking at her, you can recognize that she will be easy to subdue. It is a natural fact that the strength of a man cannot in any way, be compared to that of a woman.

So, after he had “had his way” with her for the first time, which she said she didn’t like and because of that “she stayed on her own”, this man later on came for a second bite. So much like when King Agrippa killed James and saw that the Jews didn’t do anything, he wanted to kill Peter too.

On his second sex attempt, she told him no. But he wouldn’t take a no for an answer. Then, he bacame violent. Mark the phrase; he became violent.

But then, we must recall that this man did the first sex violently. The girl said that she wanted to resist him in the first one but he insisted “and had his way”. And this is the same formula he wanted to use in this second rape seeing that he got away with the first.

Now, rape is defined in the criminal code as sex without the consent of the girl. Listen o, it doesn’t matter if the person is your boyfriend. The only exception is for married couples. But as long as you aren’t married, it is called RAPE.

Back to the issue.

This man became violent AGAIN. He probably reasoned within him that since she yielded the first time after he “used violence”, that the same formula will apply again. One would even ask; since she is your girlfriend, and you guys rented an apartment just to have exclusive time, why then do you have to use violence to have sex with her?

So, this 50yr old man then chased her. She ran to the kitchen. The man kept the pursuit. In the kitchen, he grabbed her. But before doing that, the man had locked the door and hid the key.

What does that tell you?

So, he grabbed her by the throat. This did not happen in the bedroom, but in the kitchen. It shows that the girl ran to the kitchen “for safety”. But since he had already locked the doors, she had nowhere else to go.

He then grabbed her by the throat with his 50yr old grizzly muscles. She was screaming for rescue but none came. He pinned her against the wall. She was helpless. Can you picture this scenario in your mind?

A 50yr old man grabbing and pinning this tender looking 21yr old girl, against the wall, in an attempt to RAPE her, not to bless her. I can guess that he was trying to untie his trousers at this time, with one hand.

So, seeing that she was about to be raped again and there is no help in sight, she stretched her hands and it caught a knife. She then stabbed him in the neck.

Now, stabbing someone in the stomach and stabbing someone in the neck region does not mean the same thing. When you stab in the stomach, it showed that your hands had all the flexibility and options to choose where to stab. But when you stab at the neck, it paints the picture of someone that has been denied flexibility and freedom. It means that the man may have suspended her in the air by her armpit and she couldn’t bring down her hands freely.

This shows that this girl was chocked or pinned against the wall by this voracious rapist who wouldn’t take a no for an answer.

And after she stabbed him, that was when he released her. And immediately, he went for the knife, to counter attack. The girl was Wis to have reached for it and stab him again, possibly thinking the initial stab didn’t harm him enough to prevent another chase from him.

Remember, the house has been locked and there was no where of escape. In my mind, she did the right thing by stabbing him again because I am sure he would have chopped her into pieces like onions had he laid hands on her.

Now, the only place I have deep trouble is the fact that this girl still had the tranquility to go to his ATM and withdraw 380k AFTER this miracle. But then, what we are concerned with is what happened at the scene of crime, not after.

God bless you for listening.
BARR. AGBAI STEPHEN EMELE
Barrister and Solicitor of the Supreme Court of Nigeria.