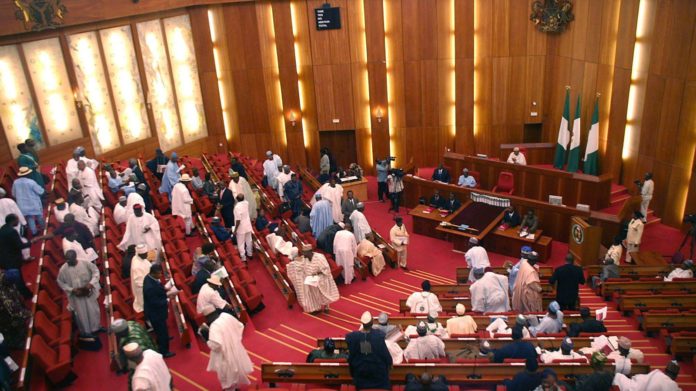 The Central Bank of Nigeria (CBN) on Wednesday disagreed with the senate over allegation of unremitted 80% of operational surpluses into the consolidated revenue fund (CRF) since 2016.

Solomon Adeola, chairman of the senate committee on finance, at a public hearing on the 2022-2024 medium term expenditure and fiscal strategy paper (MTEF/FSP), said agencies such as the CBN and the Nigerian National Petroleum Corporation (NNPC) had yet to remit their operational surpluses to the CRF.“Nigeria wouldn’t have been having problem of inadequate revenue to fund its annual budget if revenue-generating agencies were remitting 80% of their operational surpluses into the CRF as required by the Fiscal Responsibility Act,” he said.“Specifically, the Central Bank of Nigeria which has yearly budget of N2.3 trillion has not remitted any revenue from its operational surpluses into the Consolidated Revenue Fund within the last five years.”

However, his allegation was contradicted by Kingsley Obiora, CBN deputy governor in charge of economic policy, who maintained that 80 percent of the apex bank’s operational surpluses have always been remitted to the CRF on yearly basis.“With all due respect to the Senate and in particular this committee, the CBN as a law abiding government agency, had not at any time, defaulted in the remittance of its operational surpluses,” Obiora said.“We do this on yearly basis as required by the Fiscal Responsibility Act despite the fact that the CBN Act requires us, to remit 75 per cent only.

Adeola thereafter directed the CBN to produce documents to show remittances made by it over the years and make it available to the committee no later than Friday.He also told the apex bank to produce its audited account in the last five years as well as its position paper on monetary policy point of view on the 2022 – 2024 MTEF/FSP being considered by the committee.“He who comes to equity must come with clean hands. Since you have declared before the whole world that CBN has been remitting 80 per cent operational surpluses into CRF, it is necessary that we see the documentary evidence as that would lay the controversy to rest. Let’s have these documents latest by 11:00am on Friday,” the senate committee chairman said.When asked by Adeola to corroborate or dispute the CBN’s claim, Benjamin Akabueze, director general of budget office, said the true position would be determined by the ongoing process.

NSITF comes under fire over misappropriation of N17.2bn