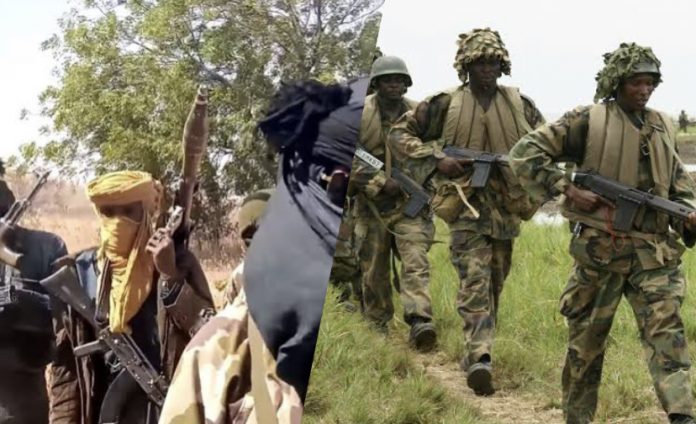 Soldiers of the Nigerian Army successfully repelled an early morning bandits attack on their base in the Chikun local Government Area on Sunday, the Kaduna State government has said.

One among the dozens of the assailants was neutralised in the gun battle but the fleeing bandits killed no fewer than three locals as they retreated, said Samuel Aruwan, the state Commissioner for Internal Security and Home Affairs.

“Troops of the Nigerian Army in the early hours of Sunday at Kankomi, Chikun LGA, repelled an attack by dozens of bandits and subsequently neutralised one of the attackers, while others escaped with gunshot wounds,” the commissioner said in a statement in Kaduna on Sunday.

Mr Aruwan said the state government was informed of the development in feedback, which captured the bravery exhibited by the troops in overpowering the bandits.

According to him, the attackers attempted to infiltrate the location housing the troops.

“The vigilant troops, in response, engaged them in a fierce gun duel which lasted for over an hour.

“This resulted in the elimination of one of the terrorists, who was wearing military camouflage combat gear.

“Others escaped with bullet wounds as evidenced by bloodstains along their withdrawal route.”

He disclosed that the troops recovered one AK-47 rifle, seven AK47 magazines, seven rounds of ammunition and five locally-made grenades from the bandits.

“Sadly, while exploiting the withdrawal route of the bandits, three corpses were found by the troops, apparently locals killed by the fleeing bandits,” he stated.

Mr Aruwan said in another development, troops of Operation Forest Sanity conducted clearance patrols along the Gwagwada-Chikun-Sarkin Pawa axis, stretching from the Chikun LGA to nearby interstate boundary areas.

According to the report, contact was made with terrorists on high ground ahead of Kafaiyo.

“One terrorist was neutralised, and an AK-47 rifle recovered.”

He further explained that two terrorists fled on sighting the troops, leaving behind their impounded motorcycles.

The commissioner said the governor of Kaduna State, Nasir El-Rufai, received the feedback with sadness and sent his deepest condolences to the victims’ families while praying for the repose of their souls.