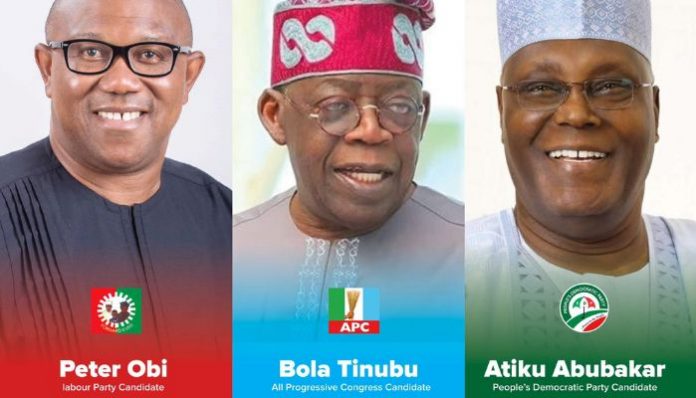 The immediate past Minister of State for Education, Chukwuemeka Nwajiuba, and a group, Incorporated Trustees of Rights for All International, have filed an originating summons before a Federal High Court in Abuja seeking an order declaring Nwajiuba as the authentic Presidential candidate of the APC.

The plaintiffs are also praying for the cancellation of the votes garnered by the Presidential candidates of the All Progressives Congress, Bola Tinubu; and the Peoples Democratic Party, Atiku Abubakar.

The first to sixth defendants in the case with suit number FHC/ABJ/CS/942/22 are: the APC, the PDP, Tinubu, Atiku, the Attorney-General of the Federation and the Independent National Electoral Commission.

Nwajiuba, who purchased the APC presidential form for N100m, but polled only one vote at the June 8 primary, accused Tinubu of bribing delegates with dollars.

The plaintiffs also attached as evidence a video recording showing the immediate past Minister of Transportation, Rotimi Amaechi, lamenting that delegates to the APC primary sold their votes.

“Those who voted at the APC primaries, who are they? They are ordinary Nigerians. The small money they got solved their immediate problem, now they are saying they made a mistake; you are now hearing different things,” Amaechi said at the 60th birthday celebration of Apostle Eugene Ogu, General Overseer of Abundant Life Evangel Mission, last week.

Based on the evidence, Nwajiuba and RAI presented 25 issues for determination by the court.

Specifically, the ex-minister asked the court to determine whether the composition of the delegates contravened Article 11(A) 12(1) and 13(1) of the constitution of the APC.

The ex-minister also asked the court to determine if the composition of the delegates at the PDP primary contravened Section 33(1) and (5) (c) of the constitution of the party.

The plaintiffs prayed the court to determine whether having regards to the clear unambiguous and express provisions and tenor of Sections 6(6) (A) (B) and (C) read alongside Section 15(5) of the 1999 Constitution, the court has the inherent judicial powers to nullify, cancel and declare as illegal the Presidential primaries of the APC and the PDP.

Nwajiuba asked the court to determine if all the votes cast in favour of Tinubu and Atiku at the special national convention of the APC and PDP are illegal, null and void and of no effect whatsoever on the grounds of corruption and selling of delegate votes and voter inducement.

Lastly, the ex-minister prayed the court to decide if having regards to the express provisions of paragraphs 1 and 8 of the 5th schedule of the 1999 Constitution, the corrupt conducts of the “third defendant (Tinubu) and the 4th defendant (Atiku) in buying votes and corruptly inducing delegates with dollars and naira in various sums to secure their votes at the special national convention… disqualifies them from further seeking, contesting and holding the office of the President.”

Consequently, the ex-minister is seeking 26 reliefs including an order that the composition of delegates at the APC and the PDP was not properly constituted.

Specifically, Nwajiuba asked the court to rule that Atiku and Tinubu along with their agents bribed delegates with dollars and the votes they got should be declared illegal.

The plaintiffs are seeking a “declaration that the conduct of the 3rd (Tinubu) and 4th (Atiku) defendants who by way of corrupt inducements of delegates with US dollars which being a foreign currency and non-legal tender in Nigeria under the CBN Act… used the dollars for the inducement of votes in favour of the 3rd (Tinubu) and 4th (Atiku) defendants has rendered the votes they scored at the special convention of the 1st defendant (APC) and the 2nd defendant (PDP) illegal, void and invalid and of no effect whatsoever and thus inhibiting (Tinubu and Atiku) from benefiting from the proceeds of their gross illegalities.”

The plaintiffs also asked the court to declare that Tinubu could not be recognised as the Presidential candidate of the APC because the money he used in purchasing the APC form could not be traced to any business.

He asked the court to make a declaration that Tinubu lacked the minimum qualification to run for office of the President which is a secondary school certificate, a document which he had failed to submit but tendered his university certificate instead.

Finally, they are seeking an order, “returning the 2nd plaintiff (Nwajiuba) as the duly elected/nominated Presidential candidate of the 1st defendant (APC) being that by the operation of Section 90(3), the 2nd plaintiff, Hon. Chukwuemeka Nwajiuba, is the only contestant out of the 10 contestants whose source of N100m is verified and complied with in the Electoral Act as contained in the print out of the names of the bank statement.”

In a supporting affidavit deposed to by one Abadom Chidinma, on behalf of the ex-minister and the RAI, it was stated that the evidence presented to the court was genuine including Amaechi’s claim and that of Chief Dele Momodu of the PDP that votes were sold at the primaries.

The deponent also argued that both the APC and the PDP have the obligation to observe the federal character principle in the selection of Presidential and Vice-Presidential candidates and that INEC ought not to accept any nomination that contravenes the country’s constitution.

Head of Legal, Tinubu Campaign, Babatunde Ogala, said, “We are not aware of it. I am just hearing that for the first time. When Nwajiuba refers to us, we will respond.”

The Director of Media and Communications, Tinubu Campaign Organisation, Bayo Onanuga simply stated, “I can’t say much in that. We wish him good luck.”

But the Director General of Asiwaju Tinubu Presidential Campaign Organisation, Adebayo Shittu, challenged the plaintiffs to prove their allegation of vote-buying.

He noted, “Can Nwajiuba prove this allegation? As I once told you, these are frustrated people. Was he even at the unveiling of Kashim Shettima, his party’s vice presidential candidate? No, he just like a few others, didn’t turn up. Did he even write the APC leadership about this?

“Anyway, let him go to court and prove his case beyond reasonable doubt. The truth is that we can’t stop anybody going to court if he has a genuine case and can tender the evidence. I mean, what he is alleging in this case is criminality and he has to prove it. That is my position.”

“Following his antecedents and utterances right from ASUU strike, he has not showed any sign of someone who has Nigeria at heart.”

A political analyst, Dr Busari Dauda, however, argued that the ex-minister had the right to seek justice if he feels justice has not been served with the way the primaries were conducted.

He stated, “The presidential primary is an internal affair of the political parties, yes. There have been allegations of vote-buying here and there but nobody has come out to say I bought or sold delegates votes, it’s his responsibility to prove beyond reasonable doubt that votes were bought. If he is able to do that and it is recognised in the constitution that they can be disqualified then the court can go ahead to disqualify them.

“However, the primaries have been conducted, the process is ongoing and INEC has released names of the candidates. I think it is an exercise in futility at this point, he is just seeking for relevance.’’