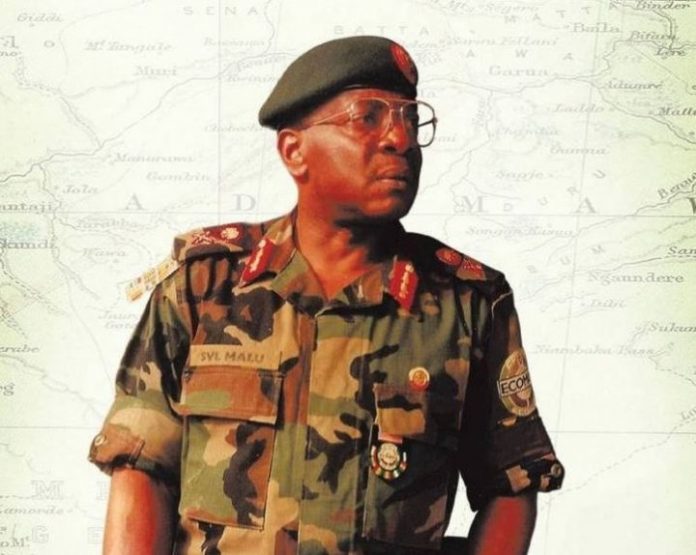 President Muhammadu Buhari has extended his condolences to the Malu family as well as the government and people of Benue State on the death of Lt. General Victor Malu (rtd), a former Chief of Army Staff (COAS).

Buhari also commiserated with the Nigerian armed forces on the demise of Malu whom he described as a very distinguished and professional colleague, who demonstrated incredible courage and leadership during very turbulent times in Liberia.

Malu died in Cairo, Egypt, in the early hours of Monday at the age of 70 years.

The president who spoke through his media aide, Femi Adesina, recalled the days of Malu as force commander of the ECOMOG peace-keeping troops in Liberia from 1996 to 1998, saying he was an icon of professionalism, bravery and discipline, and he aptly demonstrated these attributes throughout his national and international military assignments.

The president believes that the late General Malu will be fondly remembered for his dedication and commitment as a military officer, and his numerous landmark contributions to Nigeria’s unity and development.

David Mark, immediate past president of the Senate on Monday lamented the death of General Malu, whom he described as a gallant soldier.

His comments were contained in a statement signed by his Media Aide, Paul Mumeh.

“I have lost a reliable brother, dependable friend, colleague and comrade.

“Malu was a soldiers’ soldier. He was frank and truly called a spade its rightful name no matter whose Ox was gored.

“Unarguably, the nation has lost one of her best and fertile minds in the armed forces. We shall sorely miss him”, Mark said.

The All Progressives Congress (APC) described the late general as one of the finest military officers, who distinguished himself and made the country proud in several local and international assignments.

In a statement, Bolaji Abdullahi, the party’s National Publicity Secretary, said, “The APC fondly recalls the distinguished service of the late Malu as Force Commander of the Economic Community of West African States Monitoring Group (ECOMOG) peace-keeping force in Liberia from 1996 to 1998. His impressive performance earned him commendations from both Liberians and international observers over improvements that followed his taking command.

“In the course of the late Malu’s eventful tenure as the country’s Chief of Army Staff from 1999 to 2001, he doggedly canvassed and undertook reforms aimed at establishing a truly national army with a deep sense of purpose.

“The Party condoles with the immediate family, the Nigerian army and the government and people of Benue State over the painful loss. We pray the Almighty God grant the late Malu eternal rest and the family the strength to bear the loss.”

Governor Godwin Obaseki of Edo has commiserated with the government and people of Benue State over the death of Malu.

Obaseki said Lt. General Malu will be remembered for his courage to speak truth to power and defend his opinions even when it may not be popular.

“My heart goes to the family he left behind and I pray that the Almighty God grants them the strength beyond normal, to bear the loss,” the governor said.

Malu, who hailed from Benue State, of the Tiv extraction, was born on January 15, 1947 at Katsina-Ala, Benue State.

He was a member of Third Regular Course of the Nigerian Defence Academy (NDA), in 1967 and was commissioned as a Second Lieutenant upon graduation in 1970.

The former army chief chaired the military tribunal that tried the former Chief of General Staff, and Vice Chairman, Armed Forces Ruling Council, Gen. Oladipo Diya and others over the alleged failed coup plot against the then Head of State, the late Gen. Sanni Abacha.