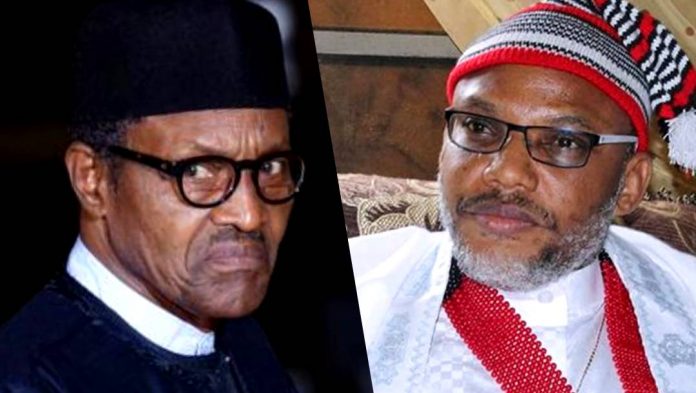 The Spokesperson of the Opposition, Coalition of United Political Parties (CUPP), Ikenga Imo Ugochinyere has taken a swipe at President  Muhammadu Buhari and the Federal Government over the continued detention of the leader of the Indigenous Peoples of Biafra (IPOB), Mazi Nnamdi Kanu, despite three different court orders.

In a statement yesterday, Ugochinyere who is the candidate of the Peoples Democratic Party (PDP) for  Ideato North and Ideato South Federal Constituency in Imo State, said that Kanu’s continued detention despite these court judgments shows that the government does not have respect for the rule of law.

The CUPP Spokesman who noted that the development is a proof that President Buhari does not have regards for the Igbo people, said that  for Buhari’s disdain towards them, Igbo,Ideato and Imo people should pay him  and party back by mobilising massively against all candidates of the ruling party, the All Progressives Congress (APC) at all levels.

It would be recalled that a Court of Appeal in Abuja acquitted Kanu of the terrorism charges filed against him and ordered his release.

The Federal High Court, Umuahia, also ordered Kanu’s release and ordered the Federal Government to return him to Kenya where he was illegally extradited, just as a High Court in Abia State had also given a judgment in favour of the IPOB leader.

The statement read, “I have observed with dismay the continued detention of Mazi Nnamdi Kanu by the Federal Government despite three recent court judgments in his favour.

“This total disregard for court judgments by this administration has shown that the APC government does not have an iota of respect for the judiciary.

“Not only that, this development is also an indication that President Buhari is calling Igbos fools.

“It is surprising that the President can be sanctioning this reckless and illegal action of his men and agencies despite saying it openly many times that only the court will determine Mazi Kanu’s fate.

“This government’s action is an affront to Igbos, especially our traditional and religious leaders who have approached Buhari on Kanu’s issue many times with him insisting that the court will be allowed to handle the case.

“This hate and disrespect for the Igbos by the President and his government should not be allowed to continue without the Igbos replying in a manner that will show their annoyance.

“I therefore call on all  Igbos to reply Buhari in the same coin by rejecting all APC candidates at all levels at the poll.

“Igbos should give zero vote to all APC candidates from top to bottom to display their grievances against the government.

“A government that does not respect the Igbos and their leaders should not be rewarded with votes.”