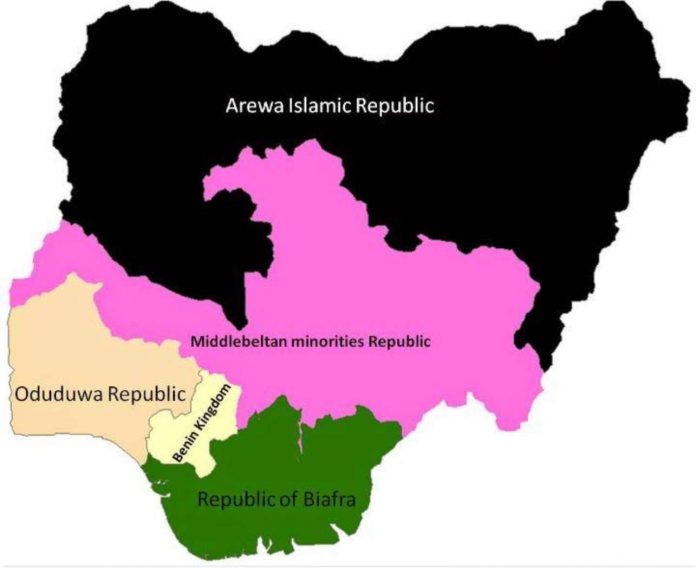 Five years after it failed to materialise, there are fresh fears that Nigeria’s break-up prediction of the United States National Intelligence Council, NIC, may still happen.

In a 2005 report entitled: “Mapping Sub-Saharan Africa’s Future,” that looked at Africa’s supposed future in 15 years, the NIC predicted that Nigeria might disintegrate in 2015.

Clearly, Nigeria was on the brink of implosion in 2015 on account of the thick bad blood generated by the presidential election. However, former President Goodluck Jonathan’s acceptance of defeat, and calling to congratulate Major General Muhammadu Buhari, retd, who was on his way to victory, as the final results were being tallied, averted a national calamity.

Then, Jonathan of the Peoples Democratic Party, PDP, was the incumbent president. Buhari ran on the platform of the All Progressives Congress, APC, a party that was cobbled two years earlier. Jonathan’s loss was the first and so far, the only time a sitting president lost an election in Nigeria’s electioneering history.

With change of government anchored on a change agenda, the expectations of rapid transformation of the country were high. Five years down the line, it is arguable whether or not the country is more united, fuelling fears that the NIC prediction could still happen since the timeline was 15 years and 2020 marks the 15th year of the report.

The doomsday report: The document was released in March 2005 after a one-day conference convened by National Intelligence Council two months earlier, where top US experts on Sub-Saharan Africa discussed likely trends in the region over the next 15 years.

The report was based on a lot of assumptions and Nigeria’s break-up was based on the possibility of a coup by junior military officers. It was an opinion held by one of the discussants.

It read in part: “Other potential developments might accelerate decline in Africa and reduce even our limited optimism. The most important would be the outright collapse of Nigeria. While currently Nigeria’s leaders are locked in a bad marriage that all dislike but dare not leave, there are possibilities that could disrupt the precarious equilibrium in Abuja.

“The most important would be a junior officer coup that could destabilise the country to the extent that open warfare breaks out in many places in a sustained manner.”

Warning on the regional and global consequences of Nigeria imploding, it said: “If Nigeria were to become a failed state, it could drag down a large part of the West African region. Even state failure in small countries such as Liberia has the effect of destabilising entire neighbourhoods. If millions were to flee a collapsed Nigeria, the surrounding countries, up to and including Ghana, would be destabilised.

“Further, a failed Nigeria probably could not be reconstituted for many years if ever and not without massive international assistance.”

Current dangerous signals: How the two weeks #EndSARS protests panned out across the country has exposed a major fault line between the North and South.

While the protesters and leaders including governors in the three geo-political zones of the South vehemently opposed SARS, and SWAT that was hurriedly announced as replacement for SARS by the Inspector General of Police, Mohammed Adamu, the scenario was different in the North.

Although, there were pockets of the E#EndSARS protests in the North, the Coalition of Northern Groups, CNG, carried out protests against insecurity. Northern governors opposed scrapping of SARS and called for the deployment of the operatives to the North to fight insurgents, bandits and other forms of insecurity.

Besides, unlike in the past when agitation for secession was localised in the South-East and especially among some Igbo angling for Biafra Republic, there is now agitations for Oduduwa Republic by some Yoruba and Kwararafa Republic by some people in the Middle-Belt. This is as calls by a host of eminent Nigerians for restructuring of the country and devolution of powers to the federating units have reached a crescendo.

We‘ve a duty to avert the prediction – Odumakin:  National Publicity Secretary of the Pan-Yoruba Socio-Political Organisation, Afenifere, said the prediction could be averted but lamented that the government is allegedly fast-tracking its fulfilment.

“We have a duty to avert the prediction but we have a deaf regime that seems to be doing overtime to bring it to pass. It would be tragic if Nigeria packs up without fulfilling her potentials,” he said.

Acceptance of existential realities ‘ll save Nigeria – Ikokwu: Speaking on the fears in Nigeria , Second Republic politician and elder statesman, Chief Guy Ikokwu, said: “Any break-up of the country may be the result of complete rejections of existential realities. It may lead to a significant variation of terms of co-operation in a federal or con-federal governance system mutually beneficial and restructured modus operandi for the entities involved for their production rather than consumption economy.

The real issue is on good governance of the Nation. Our modus operandi must reflect our cultural heterogeneous circumstances which must not be based on a Unitarian governance system.

“Our governance system must be restructured now not delayed much longer. The 1999 Constitution is a dead contraption with 68 Executive List and Centrally dominated Concurrent List. The above are prescriptions for dictatorial orientation which has been dominant for 50 years. The above-mentioned prescriptions have negated the abilities of our youths to unlock their current disabilities and incapacities. The endemic contraption called the Amalgamation Treaty of 100 years legally expired in 2014 hence the 2014 Abuja Confab. What is legally required is a credible national referendum and dissolution of the present skewed INEC-OUS system.”

Nigeria built on a faulty foundation – Ameh: To the National Secretary of the Coalition of United Political Parties, CUPP, High Chief Peter Ameh, Nigeria is built on a wrong foundation and the bad foundation is weakened by bad leadership.

He told Saturday Vanguard: “The truth is that the only reality our colonial master succeeded to amalgamate in 1914 is a failed state and not a nation. Nigeria from the onset is a ticking time bomb, waiting to detonate. The North and the South can never coexist in absolute peace because of the level of mutual distrust.

“The core rudiments upon which a country is founded do not exist in Nigeria. There is no understanding, no unity, no peace and definitely no patriotism occasioned by many years of misrule. Our nationalists tried so hard to sell to Nigerians the white man’s lie that the North and South are one. Today, the people feel indifferent.

“Education is accessible. Education has helped the people to see the light and ask questions and demand for answers. Unfortunately, this light only shines in the South, not in the North. For the North, it is mostly about sentiment and interests. Thus, northern illiteracy has become a wonderful and powerful tool in the hands of its elites. That is why the peaceful protesters are seen from an entirely different light, who by the way is fighting for the collective right of every Nigerian.

The unfolding events of today are merely the predestined unavoidable eventuality. It does not take a soothsayer to predict it.

“We have all listened while our president addressed the nation on the unfortunate outburst of law and order. The fact that the president actually took out his time to address the issue of the looting of goods in the Palace of Oba of Lagos but deliberately ignored to, at least, mention passively the Lekki toll gate massacre of innocent, harmless and defenceless Nigerians by the Nigerian army should tell you all you need to know about how committed our leaders are towards sustaining a one-Nigeria but not much sensitive to the yearnings and plight of Nigerians.”

Doomsday prediction not spectacular – Uwazuruike: Former President of Igbo intellectual think-tank, Aka-Ikenga, and lawyer, Chief Goody Uwazurike, said the NIC prediction was not spectacular because anybody with the knowledge of events in Nigeria could have arrived at the prediction.

Hide original message: His words: “Any intelligent person who has the average knowledge of the goings on in Nigeria will predict that there will be an implosion! The ruling class in Nigeria has so mismanaged the democratic process that the collapse is predictable.

“The executive arm of Nigeria has so desecrated the independence of the judiciary and the legislature that the heads of the two arms are now predictable. The American study group correctly read the modus operandi of the ruling elite. The spirit of democracy has departed from Nigeria. One day, the acts of impunity will boomerang on Nigeria.”

“If you bring IPOB, you will get the same feedback. I think the one Nigeria I want is Nigeria that serves everybody and works for everybody. I don’t know any reasonable Nigerian who wants Nigeria to break up. People just believe that Nigeria is not working in the way and manner it should work for them. So if they are agitating, I don’t think they are agitating for a break- up. They just want the powers that be to hear and listen to their pains and take some action.

Some extremists would go in the direction of unilateral declaration of independence or secession. It’s within their right to do that as long as they conduct themselves within the ambit of the law, it’s a democracy, but most reasonable, and serious Nigerians don’t play this game. Look at the demography: 65 per cent of Nigerians are under 30. They are not interested in this ego maniacal pursuit of lionising ethnic identity – you are Hausa, you are Igbo, this and that. No.

Look at music, look at information technology, look at the areas our young people are excelling, they are marrying one another, they are growing up all over the place, they are not sold to this ethnic agenda at all.

“As a country, we need a Nigeria that works for every Nigerian.”