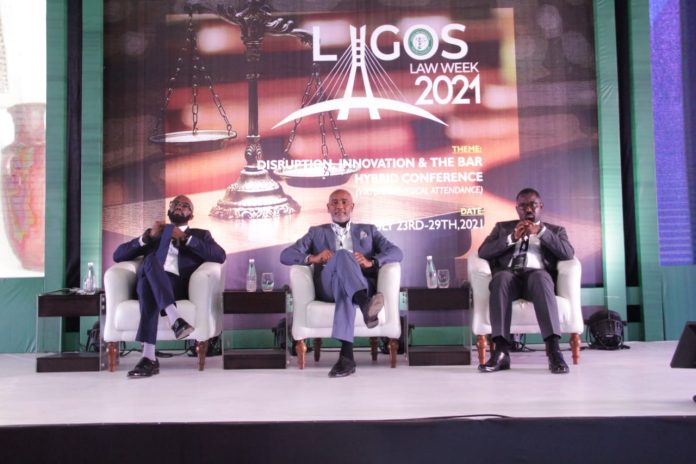 One man’s decision to leave Nigeria in his quest to achieve professional development is another man’s brain drain. Which is which? It is, of course, no longer news that an increasing number of young Nigerians, fed up with the contradictions and frustrations in their society and seeing no future for themselves in these parts, have voted with their feet and fled their homeland in search of greener pastures. Others, perhaps not quite afflicted with the same sense of angst, but seeking to advance their career prospects, have sought further education and training abroad, with an option to work there for a while and return to Nigeria – or never to return at all.

How this trend impacts, positively or negativelying, on the fortunes of the individuals concerned, and on the law space in Nigeria, and by extension the economy of the country, was the subject of a panel discourse at the 2021 Lagos NBA Law Week. Titled, ‘Soro Soke! Young Lawyers,  Minimum Wage, Brain Drain & Professional Development,’ the session was moderated by Dayo Okusami, a partner at the law firm of Templar’s, and pitted two younger lawyers, the cerebral Caleb Adebayo and Modupe Odele (aka Moschievous Moe) who both participated virtually,  against two more established lawyers,  Ayuli Jemide, currently the Chairman of the NBA Section on Business Law (SBL) and Lead Partner at Detail Commercial Solicitors, and Olumayowa Owolabi, managing partner at PISTIS Partners Plc. Both men participated in person.

It is not so much brain drain as it is the quest for professional and career development, was the contention of Adebayo in his opening remarks,  as he sought to rationalize his recent move to New York University for his advanced law degree.  However,  he added,  there are things missing, not just in the way the country of Nigeria works,  but in the workings of law firms in the Nigerian space as well, which have to change before the flight of younger professionals can be stemmed.

Adebayo’s views were corroborated by Modupe, who left Nigeria for what she had hoped would be a short spell, going to the US to hone her skills in tech,  but eventually stayed to tap into opportunities she felt were not so readily available back home.

The issue of remuneration for young associates in law firms across the land has been a vexed one for a long time now and has been widely interrogated at various NBA fora. Here, Jemide offered a typically contrarian view against the institutionalisation of a minimum wage for associates in law firms. Wages, he said, should be democratised accordingly to the vagaries of the market and each firm’s ability to pay it’s staff. It was, he added, against the spirit of entrepreneurship to impose a minimum wage floor on law firms.

As with the younger duo, Mo and Caleb, Jemide’s views were also echoed by those of Owolabi,  who described the concept of a minimum wage as ‘subjective’ – that is, determined by an employee’s and employer’s circumstances at a given period, such as the employee’s place of residence and it’s distance to his place of work, for example. Owolabi agreed, however, with those who wish to see wages reflect the dignity of the legal profession, even as he rejects a ‘standard’ minimum wage across the board.

On whether or not there is actually a brain drain among younger lawyers in the profession, Jemide answered in the affirmative,  adding however, that it is a cyclical phenomenon, especially during periods of economic downturn, as people would naturally seek respite and alternatives to their current situation.

However, as Adebayo put in,  it is not only economic considerations that force a young lawyer to leave a law firm  – if not the country entirely – either to work in another firm or to start his own. It is often times the quest for meaning and a sense of worth. Law firms, he said, need to do more about those intangibles. Contrary to prevailing belief, he and Modupe said,  experience has shown that the ‘green pastures’ abroad are not always quite so green at least not in the beginning. But one gets the feeling of being ‘inspired’ and ‘challenged’ to reach to the full limits of their potentials in a way that is totally lacking in Nigerian Law firms. There is a marked difference,  the two young wigs affirmed, in the respective work cultures of Nigeria and, say,  the United States.

The emotive nature of the topic of discussion was attested to by the enthusiastic response of the audience – especially when a member decried what he called ‘the hardship mentality’ of the average employer in Nigeria  – that is, the notion that because one suffered in their time to get to where they are today,  then the employee must suffer the same way as proof of their commitment and dedication. Hardship, this person said to loud applause (especially from younger wigs), is not the same as hardwork.

Speaking in the same vein in his summation, Okusami, the moderator, expressed the belief that Nigerian employers, and indeed leaders in all spheres, need to unlearn the hardship mentality, as the market has changed. Far from simply being about a paycheck at the end of the month, employment is also about human dignity, the sense that one is valuable and one’s work has worth. He however had some parting advice for young wigs: Play the long game; don’t just focus on the short term.

GOODWILL MESSAGE TO THE NIGERIAN BAR ASSOCIATION, ABA BRANCH, ON THE OCCASION OF HER 2021 LAW WEEK. – ADESINA ADEGBITE.