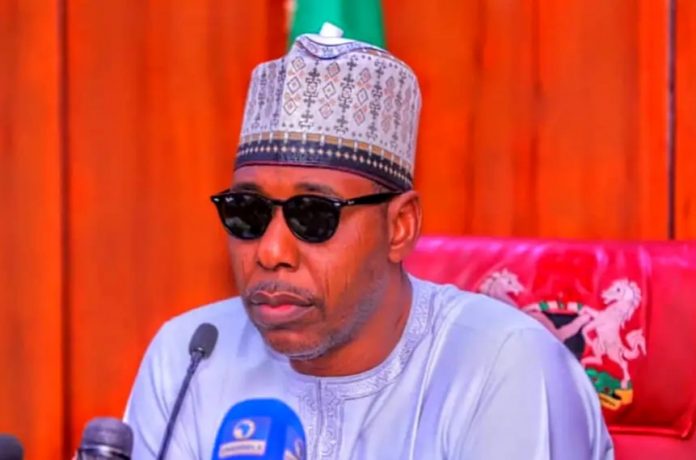 The People’s Democratic Party (PDP) Borno Chapter has alleged that most projects were executed under the leadership of Governor Babagana Umara Zulum, especially the much talked about N4.3 billion Customs Flyover commissioned by President Muhammadu Buhari last December 2021 have indicated cracks in some portions.

But reacting, the Borno State Chairman of the ruling All Progressives Congress, APC, Hon Ali Bukar Dalori described the allegation as untrue, baseless and mere saying, as there is no evidence of genuine PDP, as an opposition existing in Borno state.

According to a press statement signed and issued to Journalists by the opposition PDP Publicity Secretary, Mr Amos Adziba alleged that “it received with dismay calls and messages from concerned citizens of Borno State expressing their concern for public safety and wastages of public funds on substandard projects by the Borno State Government over the years. “The calls follow reports of the impending collapse of the just concluded Customs fly-over bridge that gulped over four (4.3) Billion naira project, which was just commissioned by Mr President last December 2021.

It is the responsibility of all citizens, which all our party leadership, members, and all citizens of Borno state to activate vigilance and demand for accountability from Governor Zulum’s led administration in the state because vigilance and demand for good governance is the price we as citizens must pay to safeguard democracy and public safety.“Our State has witnessed lots of losses of unquantifiable level over the last one decade and at this stage of recovery, while we still have numerous security challenges to face, we as a state cannot afford to waste such huge public finance on projects that are not well thought of, well designed and well-executed within the global best practices standards.

We, therefore, condemn in total, such poor infrastructure development that aside wasting huge public funds, portends a serious danger to lives of our citizens plying the routes.” Said the PDP spokesman.Meanwhile, the ruling APC Chairman, Hon Dalori, however, advised the factional group of PDP which Mr Amos Adziba paraded himself as Publicity Secretary to face their court cases filed by the genuine PDP Chairman in the state, Hon Mahdi Baderi, which is still pending.

He noted that there is no need to join issues with a factional opposition party claimed to be PDP leaders, but for the purpose of clarity, the ruling APC under his chairmanship deem it necessary to keep the general public abreast on a campaign of calumny against Governor Zulum by Amos Adziba who claimed to be publicly Secretary of Zanna Gadama led -faction of the PDP in Borno state.“Dalori said, instead of the Factional PDP led by Zanna Gadama as Chairman and Amos Adziba as Publicity secretary to face their court cases, it is unfortunate that this group have chosen to create lies against the committed and transparent execution of people-oriented projects under the leadership of governor Babagana Umara Zulum.

“Since the inception of this present administration, Zulum has executed over 600 projects comprised of roads and drainage networks, hospitals, schools which have been attested to be in good standing by notable Engineers, and that is why even the President of the Nigerian Society of Engineers, NSE, Engr. Babagana Mohammed, FNSE, while in a state visit to Borno applauded Zulum’s projects after he inspected them recently.” Dalori said.He added that the said Customs Flyover which was commissioned in December last year was adjudged to be the best not only in the northeast sub-region, but the country as a whole, considering the paucity of fund challenges faced by the present administration which is poised to end the over decades atrocities posed by insurgents