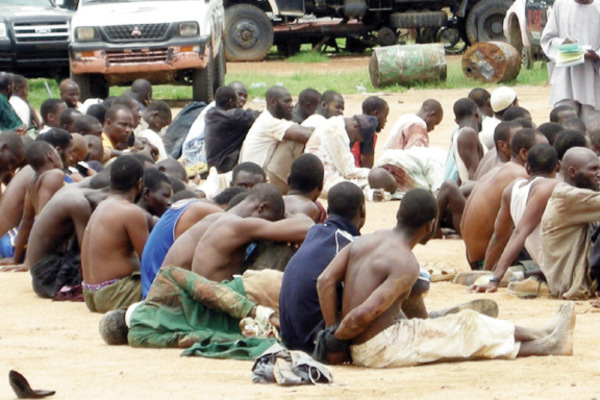 Nearly 60 men who said they were captured by the Boko Haram Islamist group and forced to fight for them in Nigeria have surrendered to authorities in northern Cameroon.

After spending two years with Boko Haram, the men decided to flee with their families and hand themselves in, according to several men who had surrendered and spoke to journalists at a ceremony in the town of Mozogo on Friday.

A total of nearly 400 people originally from Cameroon — 58 men, 86 women and 244 children — said they had been taken hostage by Boko Haram fighters during attacks on their villages and taken to Nigeria, where they were forced to join the jihadist group.

The men told reporters they had fought for Boko Haram and were laying down their arms of their own will.

They surrendered at the border with Nigeria to a village vigilante group formed to combat the jihadists. The vigilantes then handed them over to the authorities.

Ousmane Kouila, head of the group, said they had been out on patrol in the border area when they met the fleeing Boko Haram fighters. “They said they were returning, and that they were surrendering,” he said.

The local governor went to meet them and ordered them to be moved away from the border to avoid any reprisals by Boko Haram.

“We are counting on them to also convince others who are hesitating (to surrender) and there are a lot of them they tell us,” said Midjiyawa Bakari, governor of the Far North region.

Authorities would provide the escapees with psychological help, he said.

“They have been through brainwashing, perhaps also having taken an oath on the Koran or made a blood pact,” the governor said, adding they needed help with “all they must have endured” in the hands of Boko Haram.

Boko Haram’s Islamist insurgency began in 2009 and has claimed at least 20,000 lives and forced more than 2.6 million from their homes.

The violence has largely been concentrated in northeast Nigeria but there have also been repeated attacks in Cameroon, as well as Chad and Niger.