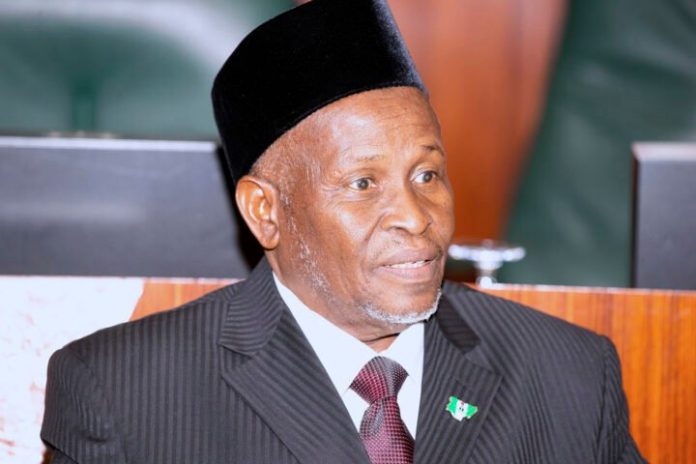 Following the rift between the Chief Justice of Nigeria, Ibrahim Muhammad, and 14 Supreme Court Justices over welfare and administrative issues, the Body of Benchers has set up a seven-man committee to look into the matter.

The Chairman, Body of Benchers, Wole Olaonipekun, a Senior Advocate of Nigeria, said on Tuesday that the committee is headed by a former CJN, Mahmud Mohammed.

He said, “We held an emergency meeting today (Tuesday) and for now, we have set up a Body of Benchers Judiciary Advisory Committee. It will be a standing committee of the Body of Benchers and the Chair of the committee is Justice Mahmud Mohammed, former Chief Justice of Nigeria.

“I am a member and the Vice Chairman of the Body of Benchers is a member and four others. We are swinging into action. We are talking to parties concerned, individually and collectively.

Olaonipekun also disclosed that the committee would work to improve the welfare package for judicial officers in the country.

He added, “The committee has also been mandated to compare and contrast what the judicial officers take as their remuneration among others with what is obtainable in other parts of the world.

“The committee will confront the executive with what we derive as the best condition of service, remuneration, among others, as obtained by other countries of the world. The CJN cannot do this; the organogram tilts against the independence of the judiciary as we want it.”

About 14 aggrieved Supreme Court justices had, in a leaked letter, accused the CJN of abandoning his responsibilities and diverting funds meant for the running of the apex court.

They complained about their accommodation, vehicles, electricity tariff, supply of diesel, internet services to justices’ residences, training for justices and epileptic electricity supply to the court.

They also accused the CJN of receiving their demands without acting “after several persistent requests” to hold a meeting which was finally held on March 31, where a welfare committee was set up.

Among other things, the Supreme Court Justices are demanding to know what had become of funds set aside for the training of justices, alleging that they were denied the usual two to three international workshops annually.

Reacting to the allegations on Tuesday, the CJN stated that the apex court, like other establishments in the country, is affected by “a devastating economic crunch.”

As a result of the economic crunch, Muhammad explained that the leadership of the Supreme Court could no longer meet some of its obligations to the Justices, especially in the area of welfare.

The CJN, while berating his colleagues for bringing their complaints to the public, said the apex court was facing a cash crunch.

Muhammad’s reaction was contained in a statement signed by his Special Assistant on Media and Strategy, Ahuraka Isah, titled, ‘State of Affairs in the Supreme Court and demand by Justices of the Supreme Court.’

The statement read, “Judges in all climes are to be seen and not heard, and that informed why the CJN refrained from joining issues until a letter, said to be personal, is spreading across the length and breadth of the society. This was akin to dancing naked at the market square by us with the ripple effect of the said letter.

“The Supreme Court does not exist outside its environment; it is also affected by the economic and socio-political climate prevailing in the country. Besides that, the Apex Court has to a larger extent, been living up to its constitutional responsibility.”

Muhammad explained that the Supreme Court this year budgeted to re-roof and rehabilitate its complex built over 30 years ago.

According to him, two Supreme Court Justices died within the period under consideration while four retired costing the court some funds in form of gratuities and allowances.

He added, “Two weeks ago, eight Supreme Court Justices were nominated for a workshop in London as the court cannot take all of them there at once otherwise the job would suffer. They would be going in batches.

“Accommodations are being gradually provided for the few that are yet to get them. There is none of the Apex Court Justices without SUV and backup cars. If any of them were purchased but refurbished, the external and internal auditors are here in the court to take those that bought them up over it.

“The high cost of electricity tariff and diesel is a national problem. The Chief Registrar might have budgeted for N300 per litre but diesel is now selling for over N700 per litre and therefore has to find a way around it without even bringing it to the attention of the CJN. But there is no way the generator would be put off if the Court is sitting.

“Internet services have been restored to Justices’ residences and chambers, just as some allowances have been paid to them. The CJN held a meeting with his brother Justices last Thursday and another one is due to hold this week.”

Meanwhile, some SANs have expressed worry over the outburst between the CJN and the Supreme Court Justices.

According to him, for all the justices to have expressed their grievances through a letter was worrisome.

He said, “I do not know the nature of the economy that’s affecting the judiciary. Is their budgetary allocation not forwarded to them? If insufficient, did he bring it to their attention; the challenges he is having?

“You cannot keep it to yourself. You bring it to the attention of your colleagues for a joint solution. It is in the nature of our people; it may be that it didn’t occur to him. Now, about the situation in which justices of the federation have to come up openly to complain should give all of us cause for worry.”

Another SAN, Bolaji Ayorinde, expressed worry that if the issue is not urgently resolved, it could affect activities at the Supreme court. Ayorinde said, “I hope it will be resolved. Obviously, something is wrong somewhere. So, now that it has come out in the open, I hope that they resolve it very quickly because that’s the highest court in the land.

“We cannot afford that kind of disagreement. It will definitely affect their work. Hopefully, it will be resolved independently by them so there won’t be any interference.”

Adegoke Rasheed, SAN, said, “The development is quite unfortunate. While we have been talking about the executive arm of government being insensitive to the plights and rights of other arms of government particularly the judiciary, it is unfortunate that it is within the judiciary now we have this. I believe that the CJN and the justices will critically look into this.

“I think it is a sad development but it is a welcome one that will open the eyes of not only the leadership of the judiciary and the nation in general on what is going on in the judiciary.”

The President of the Nigeria Bar Association, Olumide Akpata, however, kept mum about the steps the association is taking to resolve the rift between the Supreme Court justices and the CJN.

Akpata did not pick the calls that were put to him and he also did not respond to a text message seeking his comment on the issue.

But a senior member of the NBA who spoke to one of our correspondents under the condition of anonymity said, “We are still studying the situation. This is the judiciary, there is information that we also are not privy to. But by tomorrow, I will say something.”

However, a lawyer and the immediate past National President of the Committee for the Defence of Human Rights, Malachy Ugwummadu, described the rift as another sad commentary on the judiciary and that the public loses confidence in the judiciary when such issues happen.

He said, “I call on NBA particularly to rise to the issue the same way they rose against the harassment of retired Justice Mary Odili. They should step into this matter because justices cannot carry placards and jump into the arena, they are to be seen and not heard. The NBA which is the major stakeholder should find a way of rising to the occasion to seek redress to this issue.”

CJN Tanko Muhammed reacts to Accusations of Corruption by other Justices