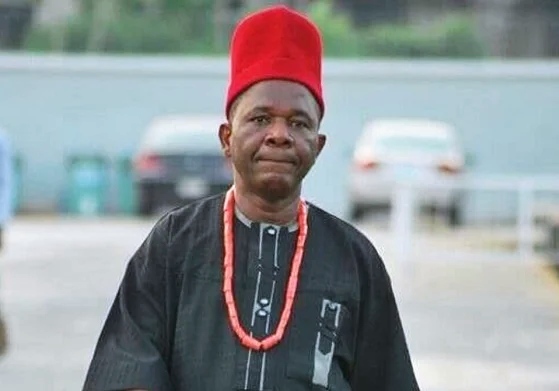 Operatives of the Department of State Services (DSS) have reportedly arrested Chiwetalu Agu, the Nollywood actor — a few hours after he was released by the Nigerian army.

Emeka Rollas, national president of the Actors Guild of Nigeria (AGN), broke the news on Saturday. According to him, the movie star was arrested by the DSS operatives on Friday evening. He added that the ace actor has not been released since then.Rollas said the AGN is currently working to secure the release of the actor.

“Yes, it’s true (that he was arrested by DSS). He was arrested yesterday in the evening. We’re working on his release,” he said in a telephone chat.The 65-year-old film star was first arrested on Thursday by soldiers for wearing an outfit themed after the flag of Biafra during which he was also reportedly assaulted.The army, however, denied assaulting the comic actor, adding that he was arrested after he publicly displayed his solidarity for the Indigenous People of Biafra (IPOB), a proscribed separatist group.

He was eventually released on Friday, after spending nearly 24 hours in detention — a development that sparked widespread outrage on social media.The actor had earlier dismissed claims by the army that he was supporting activities of IPOB in the southeast.He also argued that he only wore a civil dress not Biafra outfit as claimed.The DSS is yet to react to the actor’s arrest as of the time of this report.