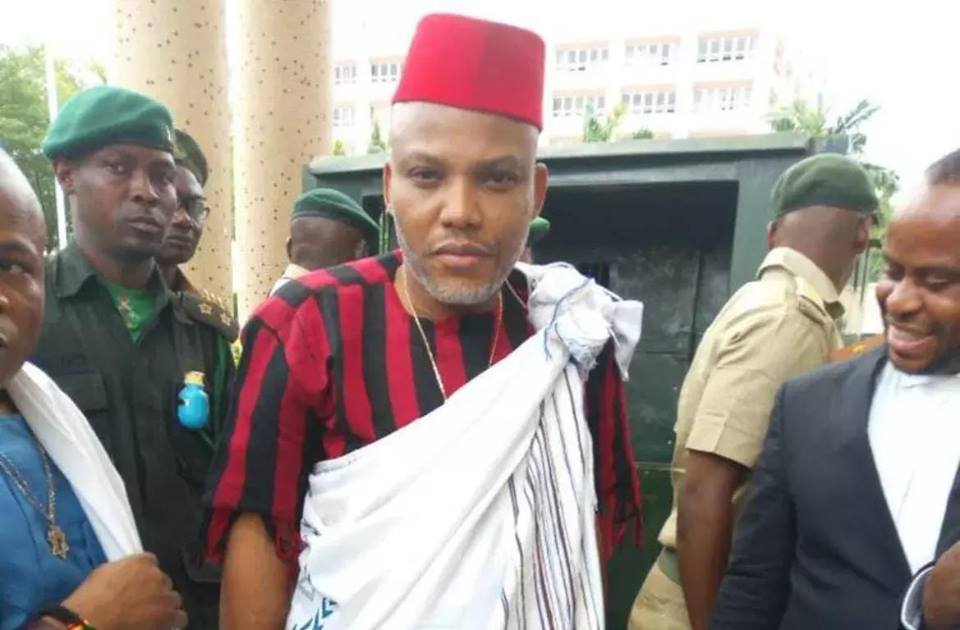 The Indigenous People of Biafra (IPOB) yesterday said that no amount of intimidation and propaganda against its leader, Nnamdi Kanu or members, by the Nigerian Federal Government would deter them from pursuing their legitimate and non-violent agitations for Biafra restoration.

The group condemned the use of stage managed parade of ‘criminals’ as part of a very cheap tactless propaganda by this administration to blackmail the most peaceful mass movement on earth.

The Media and Publicity Secretary of IPOB, Mr. Emma Powerful, in a statement condemned the parade of some criminals with revered insignia and hallowed flag of the group, describing it as ‘stupid mockery’ and unintelligent of the Police command in Awka,Anambra State.

“The parade of those they termed armed robbers and cultists, will not deter us from pursuing our legitimate and non-violent agitations for Biafra restoration,” the group said in the statement.

“The entire civilised world which Nigeria appears not to be a part of are fully aware that IPOB is a non-violent movement with unprecedented following all over the world. This hopeless and shambolic attempt by this government to portray IPOB otherwise by Hausa Fulani men of the Nigerian police should be roundly condemned by all men and women of good conscience.

“As a necessary precaution, we have instructed the chambers of Barrister Ifeanyi Ejiofor, our lawyer, to commence legal action against Anambra State Police Command for this pathetic attempt to impugn the integrity of IPOB. The Hausa Fulani controlled Nigerian Police must know that the world is watching this latest episode in stupidity and pathetic attempt to frame IPOB. Any Nigerian with any sense of dignity must be thoroughly ashamed of what this Buhari administration is doing in their name. “Despite the fact that IPOB congregate in their millions during rallies, has it ever been reported that any person or persons lost their personal belongings? The answer is no, because IPOB family members cannot even steal a common purse or wallet, not to talk of engaging in armed robbery. Rather, it is IPOB that has been at the forefront of fighting police and army criminality and banditry all over Biafraland culminating in the ‘Say No To Extortion’ campaign launched by our leader a few days ago.”

He stated that the group was well aware that Nigeria security operatives and some politicians in Anambra State were actively recruiting non-Biafrans with IPOB paraphernalia to be used to wreak havoc on unsuspecting populations with the view to tarnishing the squeaky clean image of IPOB.

Powerful stated that only gullible Nigerians could be deceived with what he described as kindergarten antics, noting that people are more reasonable and wiser now and cannot be deceived so easily by the amateurish display by the police. He queried why the security agencies felt that they would succeed this time around when they failed so miserably when they killed five Hausa men in a forest in Okigwe and attempted to pin the murder on IPOB.

“The IPOB family under the command of Mazi Nnamdi Kanu has conducted 298 peaceful protests and rallies around the world without a single recorded incident of violence or destruction of property. Instead, it is the Nigerian Army and Police that have specialised in killing and abduction of IPOB members. “Despite all these criminal provocations, IPOB has remained peaceful and never retaliated. We shall maintain our peaceful non-violent stance and will not be provoked into armed conflict by this uncivilised and barbaric regime. We keep wondering why the Nigeria government and her security operatives would be fabricating lies and accusing the most peaceful mass movement in the world of carrying arms without proof.”