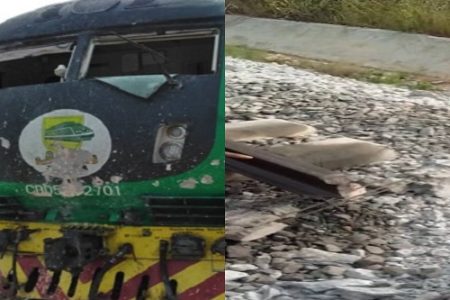 Suspected bandits have allegedly attacked the Abuja-Kaduna train, forcing the train to a stop.

It was gathered that the bandits first attacked the train on Wednesday night successfully immobilizing it.

The train was said to have been attacked between Dutse and Rijana Stations but the driver struggled to move it for a distance of about 7 kilometres towards Rigasa Station in Kaduna before stopping.

The bandits, according to sources, were said to have returned on Thursday morning and planted explosive device on the rail track damaging the track.

Senator Shehu Sani, who represented Kaduna Central in the 8th National Assembly and a passenger in the early Thursday morning train, confirmed the incident via his Facebook handle.

The Senator wrote: “Yesternight, Bandits attacked the Kaduna-Abuja train. They planted an explosive that damaged the rail track and shattered the windshield of the train engine. They also opened fire, targeting the driver and the tank.

“It happened between Dutse and Rijana stations. The Driver struggled to move towards Kaduna Rigasa station.

“This early morning, I was on board when our train ran over another explosive damaged railing. The train nearly skidded off its track, (sic) then we miraculously escaped.

“All Kaduna Abuja train operations need to be suspended for today until this issue is addressed,” Sen. Sani added.

Efforts to get the Minister of Transportation, Rotimi Amaechi to respond to the development as at mid-day proved abortive.

His lines were switched off. But his Personal Assistant Media, Mrs Taiye Edeni, confirmed the incident, saying she has been received a report and an investigation into the incident had started.

The Managing Director of the Nigerian Railway Corporation Engr Fidet Okhiria was not also available when The Nation made efforts to reach him on the development.