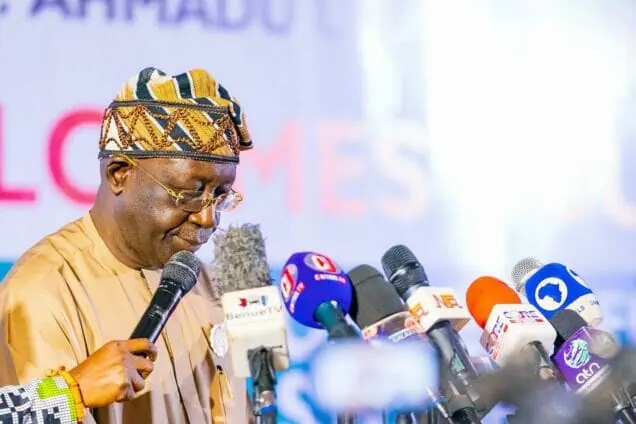 Six members of the National Working Committee (NWC) of the Peoples Democratic Party (PDP) have accused National Chairman Iyorchia Ayu of bribing members for their support over allegations of misappropriation against him.

The six members, from the South, were said to have returned to the coffers of the party, the “bribe” ranging from N28m to N36m.

Ayu, who has been having a running battle with the Rivers State Governor Nyesom Wike and his group in the PDP is in Europe.

The six NWC members, in a letter sighted by Daily Trust, alleged that the money was given to them as two-year house rent.

Orbih confirmed that he signed his own letter, saying the six of them had returned the money.

“When I enquired from your office, I was told that the said sum is for 2 years house rent for me as a member of the National Working Committee.

“Since after the lodgment of the money into my Bank Account, I have been inundated with many phone calls from party members, friends, family members and the general public, insinuating that the said money has been given as a bribe to bring me and other NWC members on the side of the national chairman following the crisis between him and the Governor of Rivers State, Governor Nyesom Wike/ Wike’s group.

“In addition, some national newspapers/social media platforms have also carried stories accusing the NWC members of being placated with bribe of N28,800,000.00.

“This development has made me very uncomfortable. Having found myself in such an embarrassing situation, I am hereby refunding to the Bank Account of our great party at the PDP National Secretariat, Globus Bank, Account number: 1000095003, the sum of N28,800,000.00 only earlier paid into my bank account

“At an appropriate time when things normalize, whatever is due to me as my house rent could be paid to me.”

The NWC of the PDP last night debunked allegations of wrong doing in paying housing allowance to officials.

A statement signed by Debo Ologunagba, the

National Publicity Secretary of the party, said “The NWC has noted that this misleading report stemmed from an unfounded publication by a particular media outlet which suggested that the housing allowance, an entitlement duly approved and paid to national officials and staff of the party amounted to bribery.

“For the avoidance of doubt, the PDP states in an unequivocal term that no funds were paid into the account of any member of the NWC as bribe for any purpose whatsoever for that matter.

“To set the record straight, the housing allowance being referred to went through the due process of the party in line with the conditions of service and entitlement of the staff and principal officers of the party.

“If any individual, for any reason decides to return money duly approved and paid, such does not in any way suggest that the money was paid as bribe or indicate that it was illegitimate or unlawfully paid.”