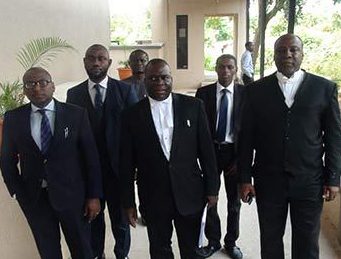 Justice Yusuf Halilu of the FCT High Court had on Tuesday declared John Echezona Unachukwu  the duly elected National Publicity Secretary of the Lawyers umbrella body  stating that no other member of the association contested for that position except the plaintiff, he stated this  while delivering judgment in a suit filed by John Austin challenging his disqualification from contesting for that  office after emerging the sole candidate for that position at the close of nominations  in the NBA election held in 2016. He consequently granted all the plaintiffs reliefs and prayers before the court.

In letter addressed to the President of the NBA, Mr. A. B. Mahmoud, SAN and made available to the press, John Austin pledged his  unalloyed loyalty and support  to the NBA president and stated his readiness to work with  the President and current national officers of the association to achieve the mandate  of the NBA. He said  “I have nothing personal against Mr. Mahmoud  SAN since  he is not the one that disqualified me from contesting  election,  so I will give him maximum corporation to actualize his vision of a Brave New Bar for the NBA Mr. John Austin was accompanied by a group of lawyers and  newsmen to  the NBA Secretariat to submit his resumption letter, CTC  of the Court Judgment also a CTC  of the certificate of the judgment issued by the FCT High Court.

Among those that accompanied him to the secretariat are Mr. Tunde Onamusi, Mr. Charles Odenigbo and others.

The court nullified NBA decision disqualifying John Austin Unachukwu as National Publicity Secretary of NBA, in the suit between John Echezona Unachukwu and the Incorporated Trustees of the NBA and 9 Others with the SUIT NO: FCT/HC/CV/241 I /2016. The court also declared the appointment of a Publicity Secretary by AB Mahmoud whilst the suit was pending to fill the position as null and void.