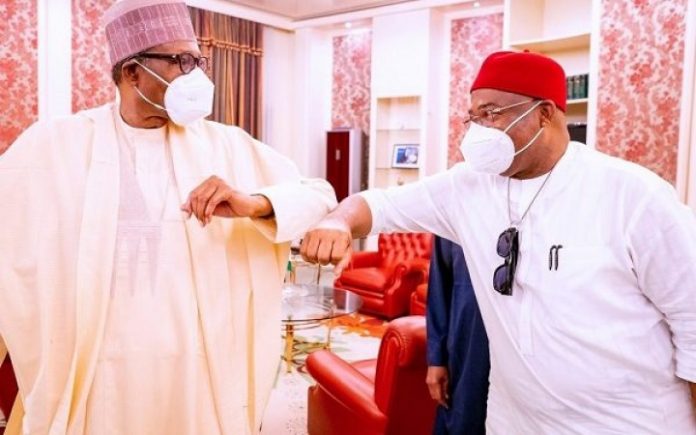 The meeting, according to the Personal Assistant to the President on Media, Buhari Sallau, took place at the Presidential Villa in Abuja.

Governor Uzodinma’s invitation to the Aso Rock Villa is believed to be in connection with his protracted dispute with one of his predecessors, Senator Rochas Okorocha.

The dispute climaxed on Sunday, February 21, when Okorocha along with some of his aides were arrested and detained after breaking the seal placed by the Imo State Government on Spring Palm Estate linked to his wife, Nkechi, but which the Uzodinma administration recovered two days earlier following the white paper of a judicial panel of enquiry.

Okorocha was released around 11:30pm after several hours in police custody while 14 of his arrested followers were charged to court yesterday and granted bail.

The former governor acknowledged the intervention of the presidency that led to his release, telling his supporters who thronged his Owerri mansion yesterday morning: “I want to thank the presidency for intervening in the matter – those that intervened saved us from a mess. I do not want to soil my hands in blood, may be other things would have happened.”

The South-East Governors’ Forum has similarly waded into the matter.