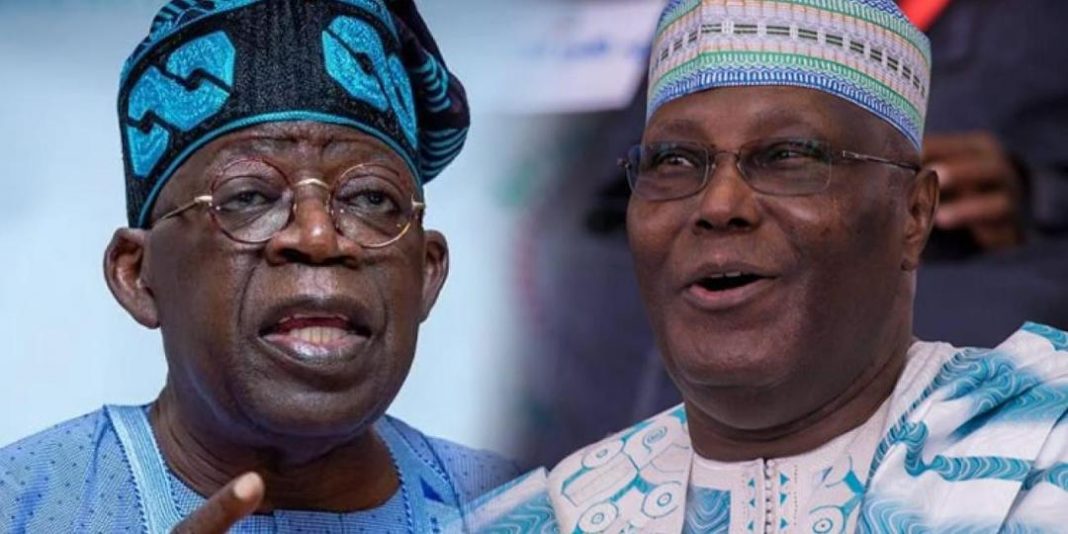 Speaking to supporters in Edo State on Thursday, Tinubu had said his vision is to “turn so-called yahoo yahoo boys into in manufacturing and creation of than being gazelle gagaraga.”

The former Lagos governor continued to bid for the country’s presidency amidst public concerns regarding his health status and physical fitness for the job.

Speaking in a statement by Phrank Shaibu, his special assistant on public communications, Atiku said Tinubu was frustrated.

According to him, while serving as Deputy Director of Customs in charge of Enforcement and Drugs, he stopped the ruling APC candidate and others from bringing hard drugs into the country.

The statement read, “The Presidential candidate of the All Progressives Congress, Asiwaju Bola Ahmed Tinubu, produced another comedy skit at the APC Presidential rally in Benin City on Thursday when he promised to turn “the so-called Yahoo boys in Edo State to “experts in manufacturing and creation of chips.”

“Had it been he was addressing a Christian congregation, we could have assumed that he was speaking in tongues but this was a campaign rally where he was supposed to have sold his candidacy to the millions of youths suffering from unemployment under the disease called the APC. Instead he elected to refer to the young people of Edo state as Yahoo boys and fraudsters.

“Tinubu’s daily gaffes are evidence that he has no business going to Aso Rock Presidential Villa but he should rather be seeking urgent medical attention. While delivering his uninspiring speech, he took a swipe at Waziri Atiku Abubakar, insisting that Atiku acted dishonourably by selling vehicles while he was a customs officer.

“Tinubu’s frustration is quite understandable given the fact that in 1989 while Atiku, a Federal officer, was serving as the Deputy Director of Customs in charge of Enforcement and Drugs and was protecting the country’s borders from smugglers and drug dealers, Tinubu was in bed with two notorious drug kingpins, Muiz Akande and Abiodun Agbele.

“American authorities revealed that Akande took Tinubu to First Heritage Bank where he opened an account for himself and his wife Oluremi in 1989. While opening the account, the Lagos godfather revealed in documents that he worked with Mobil Nigeria Limited and his salary was $2,400 and he had no other sources of income. But records from his First Heritage Bank account showed that in 1990, he deposited $661,000 into his individual money market account and in 1991 deposited $1,216,500 into the same money market account.

“In a bid to protect their reputation, Mobil representatives told US authorities that even though Tinubu was a treasurer, he had no direct access to the company’s cash and thus could not deposit funds on behalf of the firm. Till date Tinubu , the man Governor Wike and his friends have in their parochial interest signed up to support as President, has not been able to explain to any human being how he was able to save over $1.8 million from his monthly pay of $2, 400. Luckily for him, he was able to negotiate a deal with the US government which saw him forfeit over $460,000 in cash.

“Yet this is the same man that is taking the moral high ground, this must be the joke of the century. This is a man whose entire life is built on falsehood. He is not even brave enough to reveal the primary and secondary schools he attended for fear of the avalanche of dirt that will be unearthed about his life. He has continued to avoid debates so that he will not be forced to tell the truth. Yet he has the effrontery to question Atiku Abubakar? What a joke.

“Atiku Abubakar has been transparent with his life and business. He has listed all the companies he owns and has established himself as arguably the largest private employer of labour in Adamawa State but Tinubu who keeps cash laden bullion vans on his premises has no known source of wealth. For a man who openly claimed to be wealthier than Osun State, what Nigerians should be asking him is how did he become stupendously wealthy?

“Perhaps, the biggest indictment against Tinubu is Alpha Beta Consulting, a company given exclusive rights to generate revenue on behalf of the Lagos State Government since 2002. A former Managing Director of the firm, Oladapo Apara, said in court filings that Tinubu runs the company by proxy. Apara claimed the firm generated over N1.5 trillion ($3.48bn) for the Lagos State government between 2002 and 2018 and received a commission of about 10 percent on average.

“Apara told the EFCC in a petition that as the head of the company, he began looking into its finances and he made many startling discoveries such as mysterious transfers of over N20bn ($46.5m) in different currencies to some companies linked to Tinubu. Ahead of the election, Tinubu entered into a secret financial settlement with Apara and the case came to a sudden end in court.

“Tinubu should hide his face in shame rather than try to pontificate about morality. How can he even be talking about reforming Yahoo boys in Edo State given his dark past with US authorities? He should remove the log in his eyes before trying to remove the speck in the eyes of others.”