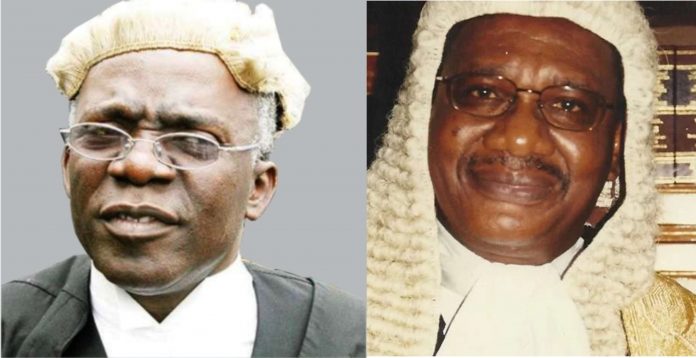 The Chairman, Presidential Advisory Committee Against Corruption, Prof. Itse Sagay (SAN), and prominent lawyer, Femi Falana have called on the President Muhammadu Buhari-led administration to arrest immediately the wanted ex-chairman of the defunct Presidential Task Force on Pension Reforms, Abdulrasheed Maina, who has returned to Nigeria.

Maina, who fled the country in 2015 after being indicted for allegedly perpetrating fraud to the tune of N2bn, returned to the country and was posted to the Ministry of Interior based on the recommendation of the Head of Service and was given double promotion.

But on Sunday evening, the Economic and Financial Crimes Commission spokesman, Mr. Wilson Uwujaren, maintained that Maina was still wanted.

When asked if Maina would be arrested by the commission, the EFCC spokesman refused to speak further.

The EFCC on its website, www.efccnigeria.org, retained a picture of Maina, asking members of the public to help fish him out.

The EFCC wrote, “The public is hereby notified that Abdulrasheed Abdullahi Maina, former chairman of the Pension Reform Task Team, whose photograph appears above, is wanted by the EFCC for offences bordering on procurement fraud and obtaining by false pretences.

“Dark-complexioned Maina is allegedly complicit in the over N2bn pensions biometric scam in the office of the Head of Civil Service of the Federation. He remains at large after charges were filed against his accomplices.

“Anybody with useful information as to his whereabouts should contact the commission in its Enugu, Kano, Lagos, Gombe, Port Harcourt or Abuja offices.”

Speaking with our correspondent on Sunday, Sagay said Maina’s case should not be treated with kid gloves based on the gravity of the offence he allegedly committed.

The PACAC chairman described pension scam as one of the worst forms of fraud known to mankind and anyone accused of such should not be handled with kid gloves.

Sagay said, “This man was accused of embezzling billions of naira meant for pensioners who had spent all their lives serving this country. One man took the money they should rely on in their declining years, subjecting them to misery and hopelessness.

“This is a moral and criminal issue. So, to hear that the man is in the country and somebody employed him means he is not the only criminal in the system. It means there is an accessory.

“Whoever was involved in employing him and then giving him promotion is an accessory after the fact to the crimes committed by this man if it is established that he is culpable. I don’t see why he escaped if he was not guilty.”

He added, “The EFCC should not just say they are aware; they should take action. The EFCC should now arrest him, interrogate him and if they can establish a case, prosecute him. They should also investigate all those involved in the reabsorbing and promotion of this man.

“If it established that they brought him back into the civil service despite knowledge of the man’s alleged crimes, they are also accessories after the fact and should also be arrested and prosecuted.”

Fayose said on his official Twitter handle, “Someone accused of stealing billions of pension fund was returned to the Federal Government civil service and you still think Buhari is fighting corruption?”

Similarly, human rights lawyer, Falana urged the EFCC to immediately charge Maina with the alleged N100bn pension fraud for which he was declared wanted for years.

He equally called for the immediate prosecution of the Minister of Interior, Abdulrahman Dambazau, and the Head of Service of the Federation, Mrs. Winifred Oyo-Ita, for allegedly shielding the suspect from prosecution.

Falana, in a text message to our correspondent on Sunday, also urged President Buhari to sanction those involved in Maina’s recall and promotion in their bid to sabotage the administration’s anti-corruption war.

He said, “Mr. Maina was declared wanted by the EFCC because of his indictment in a pension scam. Now that he has been located, the EFCC has a duty to charge him without any further delay.

“The Head of Service and interior minister who shielded him from prosecution ought to be charged with aiding and abetting the felon.

“Those who recalled and promoted the fugitive ought to be sanctioned by President Buhari to serve as a deterrent to others who may wish to sabotage the war against corruption.”

Also reacting to the development, Mr.Yusuf Ali (SAN), said the re-absorption of Maina into the service, if true, was a big blow to the anti-corruption efforts of the Federal Government.

He said, “We don’t have all the facts at the moment. I don’t want to believe that the re-absorption of the man into the civil service was true without him being discharged and acquitted by the court. If that was the case, then it will be a big blow to the anti-corruption effort of the government. When we have all the facts, we can make more definitive comments.

Speaking in a similar vein, a retired Commissioner of Police, Abubakar Tsav, said Maina’s reinstatement into the civil service made a mockery of the anti-corruption posture of the President Muhammadu Buhari-led administration.

He said, “The war against corruption is not true. This man ran away after he was accused of embezzling pension fund; instead of handing him over to the EFCC, he was re-absorbed and promoted. Why? This is very bad. We expect that Buhari with his reputation as a man of high honesty and integrity not to condone this kind of thing. If such a man can condone such a thing, I don’t know where this country is going.

“Retired police officers are owed 32 months of pension arrears, the money this man (Maina) is being accused to have stolen is part of the money required to pay these arrears.

“Up till now, they have not been paid and this man came back after he ran away, has been taken back and promoted. This is a mockery of this anti-corruption fight.”

When contacted on the telephone on Sunday, the Assistant Director (Press), Office of the Head of Service of the Federation, Mohammed Manga, asked our correspondent if Maina had ever been dismissed from office to warrant reports that he was reinstated.

Manga said, “Before we begin to talk of reinstatement, was Maina dismissed from service at a point? In every organisation, there are rules and regulations. The civil service is generally governed by the civil service rules.

“If you say he was dismissed from service, who dismissed him? If EFCC is looking for him, what did he say? What was the end of its investigation?

“Let us find out if he was dismissed? Who dismissed him? Who reinstated him and why?”

He was posted to my ministry by HOS –Internal Affairs Minister

The Minister of Interior, Lt. Gen. Abdulrahman Dambazau (retd.), has absolved himself from complicity in the reinstatement and posting of the former chairman of the Presidential Task Force on Pension Reforms, Abdulrasheed Maina, to the ministry.

He said Maina, who was declared wanted by the Economic and Financial Crimes Commission, was posted to his ministry by the Head of Service a few days ago.

Dambazau, in a statement signed by his press secretary, Ehisienmen Osaigbovo, in Abuja on Sunday, said Maina was deployed to the interior ministry in acting capacity to fill a vacancy following the retirement of the director in charge of the human resources department.

The statement read, “The ex-chairman of the Presidential Task Force Team on Pension Reforms, Abdulrasheed Maina, was posted a few days ago to the Ministry of Interior by the Office of the Head of Service on an acting capacity to fill a vacancy following the retirement of the director heading the human resources department in the ministry.”

It added, “For the avoidance of doubt, issues relating to discipline, employment, re-engagement, posting, promotion and retirement of federal civil servants are the responsibility of the Federal Civil Service Commission and the office of the Head of Service of the Federation, of which no minister exercises such powers as erroneously expressed.”

The minister said that Maina was probably posted to the interior ministry because that was his last posting before he was declared wanted by the anti-graft commission for the multi-billion naira pension fund scam.