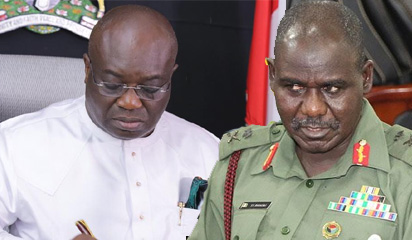 The Army in a statement signed, last night, by Director, Army Public Relations, Brigadier General Sani Kukasheka Usman, asked the public not to misconstrue the statement of Governor Okezie Ikpeazu of Abia State, yesterday, to mean that the Army was totally halting the Operation Python Dance II in the South East, including Abia State.

The attention of the Nigerian Army has been drawn to some stories in the media that it is withdrawing its troops from exercise EGWU EKE II, crediting such information to Abia State Governor and the General Officer Commanding 82 Division Nigerian Army. This is not true. The Nigerian Army wishes to enjoin members of the public to disregard such rumours.

For the avoidance of doubt, the Abia State Governor in his speech stated that “there will be gradual withdrawal of soldiers on the streets of Aba and Umuahia from tomorrow. This should not be misconstrued as withdrawing of troops earmarked for Exercise EGWU EKE II. The General Officer Commanding 82 Division has not said such thing.

Consequently, we wish to state that exercise EGWU EKE II is commencing tomorrow as scheduled. Commanders have been instructed to ensure that all hands are on deck to commence the exercise to its logical completion.

We wish to state further that the successful completion of the exercise will dovetail into the various states security outfits till the end of this year. Members of the public, especially in the areas where the exercise will take place, are please enjoined to go about their lawful businesses. We wish to also state that we would not allow any individual or group to jeopardize the conduct of the field training exercise through unlawful or criminal activities. “Hoodlums and criminal elements are once again warned to be law abiding and not cause any breach of peace.

We, hereby, reiterate that our troops would conduct themselves in the best professional manner, abide by the Rules of Engagement and Code of Conduct in line with requirements of the Constitution of the Federal Republic of Nigeria. Any act of indiscipline by any of our personnel would be decisively dealt with.

While we enjoin all Nigerians to go about their normal businesses, the Nigerian Army urge all to support the troops as they carry out their constitutional duties and make exercise EGWU EKE II a success.

The announcement came as 82 Division of Nigerian Army said it is investigating a video clip trending on social media and other platforms purportedly showing troops humiliating some people at a check-point in Abia State.

Also, yesterday, the Inspector-General of Police, IGP, Ibrahim Idris, said the police hierarchy is in touch with South-East governors, asking them to mobilize political leaders on how to intervene in the charged security situation in the zone.

At a security update media briefing, Governor Ikpeazu called for calm and urged the people of the state to go about their lawful businesses.

He said, “The security situation in the state in the past few days, which led to the deployment of soldiers into our state ahead of the Operation Python dance 11, has become of great concern to both the government and the citizen.”

“I want to inform you that by tomorrow morning (today), there will be withdrawal of soldiers from the streets of Aba and Umuahia, apart from the pre-existing military checkpoints at various locations in the state.”

“With the expected exit of soldiers from the streets, we must warn that we will not tolerate agitators and protesters taking over the streets for any reason at all.”

“I will also be meeting the President and Commander-in-Chief of the Armed Forces, President Mohamaudu Buhari, to discuss possible ways of relaxing the Operation Python dance 11 in the state for now.”

“Our attention has been drawn to ugly incidences of attacks on police stations and military posts at Aba and Umuahia and we hereby warn that we will no longer tolerate that, and all other acts that are capable of causing insecurity in the state.”

“We have also observed illegal acts of throwing petrol bombs and setting up of bonfires to obstruct free movements along some roads by suspected miscreants and wish to warn that such acts should stop forthwith.”

“To mischief makers who want to use Abia as their base, let me announce to you that henceforth, Abia will be too hot for you to carry out your wicked acts as the Government will work with security agents to ensure the protection of lives and properties in the state without fear or favour.

There will be no hiding place for you. “At about midnight yesterday, we received security reports that hoodlums and miscreants, some of whom were allegedly brought into the state by unscrupulous individuals, were mobilizing around Uratta Road at Aba with a view to converging at Ariaria International Market to burn it down. Their aim was obviously to take advantage of the security situation in the state to cripple the economy of the state and cause widespread suffering.

“It was this group that originated the rumours of attacks and counter-attacks around the area and also tried to create panic to force people out of their homes to enable them execute their evil intentions under the cover of orchestrated crises.

“Thankfully their plan was nipped in the bud by the combined team of soldiers and policemen that promptly moved to the area and later positioned around Ariaria market to protect the lives and properties of our people.

“My fellow Abians, it is in the interest of all our citizens and residents for full and total peace and security to return to our state immediately. No meaningful progress can be made in an atmosphere of violence and anarchy.

“Those at Aba are therefore advised to fully observe the current curfew in the city and ensure that they cooperate with security agents to maintain peace and order.

“I swore to protect lives and properties of all Abians and residents and that I must do. I, therefore, call on all to support our efforts at making sure that lasting peace prevails in our dear state”, Ikpeazu said.