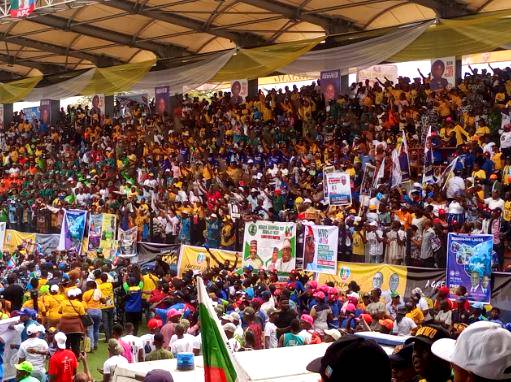 The Mobolaji Johnson Arena (Old Onikan Stadium), Onikan, Lagos, in the early hours on Saturday, was beseiged by residents and supporters of All Progressives Congress, APC, for the official campaign kick off for the re-election bid of Governor Bababjide Sanwo-Olu and his deputy, Dr. Obafemi Hamzat in 2023 guber polls.

As of 9am , the stadium was filled to capacity as more crowd from the 20 Local Government Areas and 37 Local Council Development Areas, LCDAs, gathered inside and outside of the Arena.

Armed security personnel, private security outfits as well as emergency responders were seen stationed at strategic areas to ensure protection of lives and properties of residents.

Vehicular movement has been restricted around the area as residents continued to throng the arena.

The supporters were seen chanting solidarity songs in praise of Sanwo-Olu and APC Presidential Candidate, Bola Tinubu and his Vice, Kashim Shettima.

Various musicians are on ground entertaining guests and participants at the event.

Oladeinde, advised motorists who intend to make use of Island Club road by Police Headquarters Zone 2, Onikan to make use of the following alternative routes;

Motorists from Victoria Island are urged to make use of Ozumba Mbadiwe road to Five Cowries Bridge (Falomo Bridge) to Alfred Rewane road to Osborne road to connect their desired destinations.

He also urged motoring public moving from Bonny Camp to access CMS/ Marina Bridge after Independence Bridge (Mekunwen Bridge) and loop it down towards Cathedral Church to link Lagos Island through Odunlami Street and connect their desired destinations, or use Force road beside Muson Centre to J.K Randle road Avenue (Race Course) to Water Board to old Broad Street to continue their journeys.

Alternatively, Oladeinde also said Motorists moving from King George V road to Awolowo road/JK Randle Avenue through Onikan Roundabout should make use of Turton Street to Lewis Street to Sandgrouse and proceed on their journeys, or use Moloney Street to Obalende and proceed to their desired destinations.

The Commissioner further advise motoring public moving from Awolowo road, Ikoyi to Onikan to make use of Falomo Roundabout to access Alfred Rewane road to Osborne road through Simpson to Sandgrouse and connect their desired destinations, or from Simpson interchange to Obalende to Moloney Street and proceed on their journeys.

He added that Motorists moving from JK Randle Avenue (Race Course) to Water Board can make use of either Old Defence road or Ganiyu Smith road to link Igbosere, Sandgrouse to connect Simpson Street and Third Mainland Bridge through Simpson Interchange for their desired destinations.

Oladeinde said that in order to cushion the inconvenience and reduce travel time, Security and Traffic Management Personnel will be deployed to all the strategic junctions and intersections to ensure safety and security of all road users as well as free flow of traffic within the perimeter of the campaign venue and alternative routes.