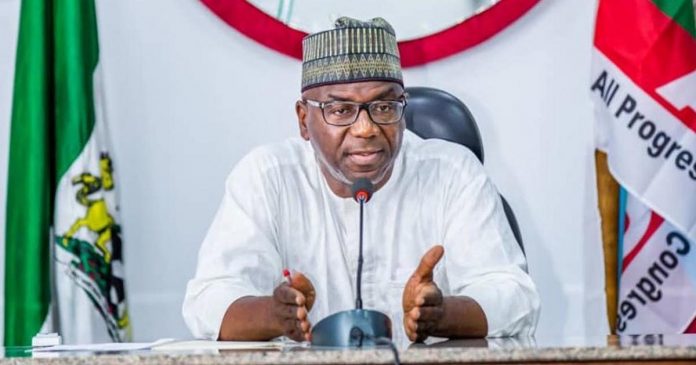 Governor AbdulRahman AbdulRazaq of Kwara has broken his silence on the crisis rocking the state chapter of the All Progressives Congress (APC).

The governor and some leaders of the party, including the Minister of Information and Culture, Alhaji Lai Mohammed, have been at loggerheads.

Speaking on Saturday at the launch of a book titled “O to ge”, the governor, in what is his first public comment on the crisis, accused aggrieved leaders of the party of receiving hundreds of millions of naira as donations for the “Kwara struggle” without delivering a kobo to him.

Represented by Deputy Governor, Kayode Alabi, AbdulRazaq said party officials were equally barred from campaigning with him until the presidential election had been won and the pendulum was clearly swinging in his favour.

He said Otoge, the struggle of Kwarans, did not necessarily start in 2019.

“I need to set the record straight about the party crisis. It did not begin after the election or swearing-in. It is safe to say that those who claimed to own the party in the state at that time practically disowned me until after the President had won his election and the coast became clearer back home. Here is the story.”

“Shortly after the primaries in October, the party told me they had set up a campaign structure. Nobody consulted me before doing that, even though I was the governorship candidate. They asked me to fund the campaign structure that I was not privy to. Of course I declined it.

“I would later lead my own small campaign team across the state. It is on record that the party officially boycotted my campaign tours. Party officials got the instruction not to attend my campaign. A few of them can testify to this. I went round the whole of Kwara North without the party.

“I am not aware of any decent democracy where a candidate would not be given the privilege of shaping the direction of his own campaign. It is even worse that my campaign was boycotted because I refused to be led by the nose.

“I have told these stories of the slogan and of the party issues to disabuse the mind of Kwarans or friends of Kwara who may not have had this information. In doing so, I am not claiming sole credit for the success of the struggle. Far from it. I have done so simply to clear the air, and this book launch offers the right platform to speak up.

“And for Ministers, Governors, party supporters and friends of Kwara who I later heard donated hundreds of millions of naira to support the Otoge struggle in Kwara, I want to say that I did not receive a kobo of that fund. But how that money was managed or stolen is a story for another day”, Abdulrazaq said.

The governor congratulated the author of the work Tony Oyeyiola, describing it as a commendable effort and directing the purchase of 100 copies for the government.

At a stakeholders’ meeting recently held at the open field of the Lower Niger River Basin, Ilorin, the factional chairman of the party, Bashir Omolaja Bolarinwa, publicly apologised to party members for his role in “rigging the governorship primaries in favour of Abdulrazaq”.

He had said, “I never knew this is how it will turn out. When I was directed to announce him (the governor) as winner of the gubernatorial primaries by the party national leadership, I asked him when he came to me that hope you will not turn against me later. But today, the scenario is exactly opposite. Those we offended to favour him are now our friends and he is now our enemy.

“On the campaign of the party during the electioneering, far from the narrative being sponsored by our opponents that we boycotted his campaign, it was he (Abdulrazaq) who starved us of fund after he has seen that his candidature cannot be replaced anymore. That was when he started all his troubles with us.”