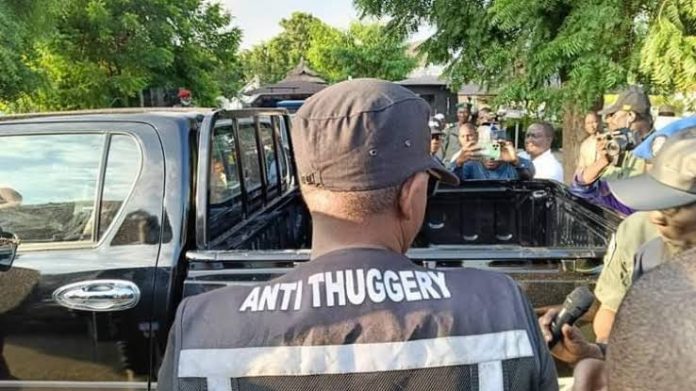 The Zamfara anti-thuggery committee on Sunday demolished a campaign office of the ruling All Progressives Congress (APC), which groups of youth, alleged to be thugs, use as a hideout to commit a crime.

In an interview, the chairman of the committee, Bello Bakyasuwa, said those occupying the campaign office were allegedly involved in criminal activities and indecent acts, including social vices that were unacceptable to society.

According to him, the committee’s action followed intelligence made available that occupants of the party office were disguising themselves to commit indecent and criminal acts in the name of the campaign.

“Based on the available intelligence report to my committee on the party campaign office which we demolished today, indicated that the occupants are selling spare parts of stolen vehicles, motorcycles and drugs.

“We even recovered some women’s clothes during a raid of the said office,” Mr Bakyasuwa said.

He expressed the committee’s determination to rid the state of political thuggery and other antisocial vices.

Mr Bakyasuwa stated that the committee was working round the clock to fight against political thuggery, drug abuse and other related criminality.

He said the committee’s effort was to ensure a hitch-free electioneering campaign by all political parties in the state.

“I am appealing to political parties and politicians to cooperate with the anti-thuggery committee in its efforts to ensure peaceful electioneering campaigns and elections in the state,” he said.

He, however, cautioned political parties and politicians to shun acts of sponsoring youths in thuggery, saying it was capable of causing unrest during electioneering campaigns, elections, and beyond.

The committee was established by Governor Bello Matawalle’s Executive Order II, which gave it the mandate to fight thuggery and other violent acts irrespective of their political lenience.