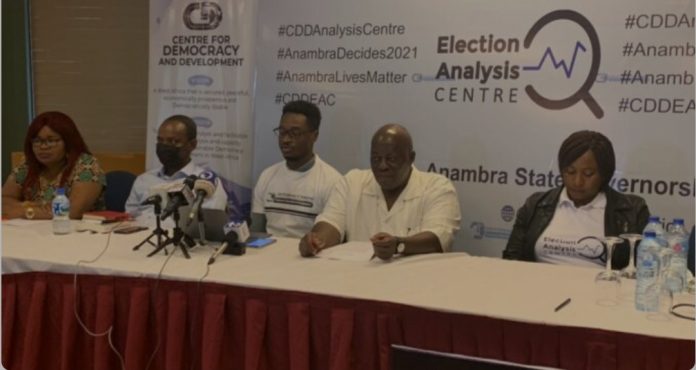 The Centre for Democracy and Development (CDD) says there were “widespread incidents of vote-buying” in the governorship election in Anambra state.

The election observer group also said the malfunctioning of the Bimodal Voter Accreditation System (BVAS) in some polling units may affect the election outcome.The CDD’s position is contained in its preliminary findings on the election, released on Saturday in Abuja.“We have also noted widespread incidents of vote-buying that will likely negatively impact the credibility of the election result. CDD observers reported numerous not-so-discreet cases of “see-and-buy” in polling units across the 21 LGAs of the state,” the statement reads.

“In many reported cases, police officers have been alleged to have looked the other way, likely as a result of having themselves been compromised. This practice, which appears to cut across party lines, has been an increasing feature of Nigerian elections and requires more concerted remedial efforts by INEC and other critical stakeholders.“One repeated occurrence that threatens to mar the quality of the election outcome has been the widely reported failure of the Bimodal Voter Accreditation System (BVAS) across numerous polling units in the state.“In several instances, the BVAS failed to recognise voters’ faces and fingerprints, and those affected were asked to wait until the challenge was resolved.

“CDD observers further reported that in cases where the BVAS worked, its pace was frequently slow, leading to longer wait times than necessary for voters. In several reported cases, frustrated voters were forced to return home without casting their votes. The resort to manual voting will likely generate uncertainties about the validity of votes cast. This will likely also open up the election to petitions and questions regarding its legitimacy.”

CDD added that there were no “widespread reports” of misconduct by security officials deployed for the elections.

After my imprisonment, I discovered life is vanity-Sen Orji Kalu

INEC to Buhari: We are satisfied with amended electoral act