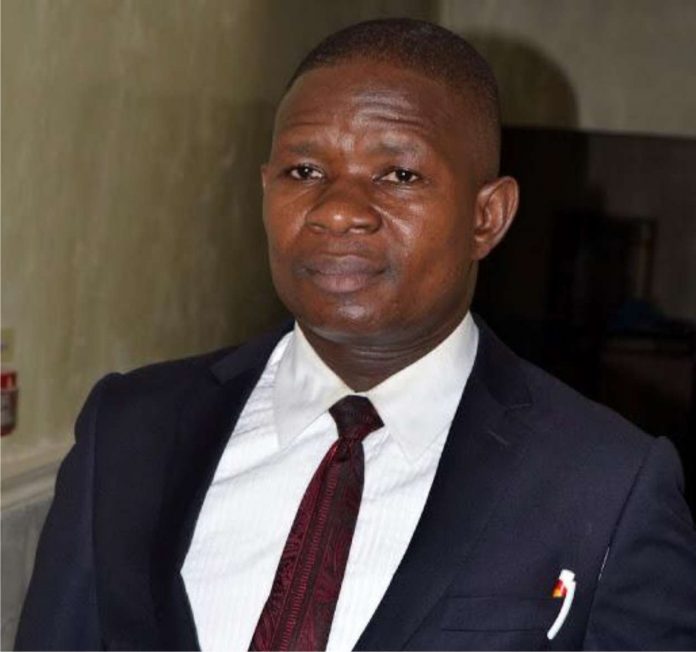 Nigeria appears to have assumed the status of a country of one-week-one-story; a country of all possibilities. Nigeria’s “god” worketh wonders and with him, all things, just anything, are possible. Happily (?), some happenings and stories add glamour to the movie-scene-like country while helping to showcase the depth of the dirt. Examples: (1) Gorilla swallowed N68 Million in a Kano Zoo; (2). In 2018, Monkeys swallowed N70 million belonging to Nigeria’s Northern senators.

Thereafter, a Mystery snake swallowed N36 million cash at a JAMB office. The list is endless. See: Animal Looters: How Men Would Pay Dearly For The Sins Of Money-Swallowing Gorillas, Snakes, & Monkeys In Nigeria” By Sylvester Udemezue: (TheNigeriaLawyer, June 19, 2019). On July 29, 2021, a news item emerged: “Gunmen Invade Ministry Of Finance In Nasarawa, Cart Away ₦100 Million”_ Questions: Who kept N100 million naira there? What for? In a “cashless economy”? Are we “fantastically corrupt” as alleged by Britain? A popular, pretty, Nigerian Singer (Omawunmi) would say, “if you ask me, who would I ask”?

The answer blows in the wind”. Besides, it’s not the subject of the current discussion although only a thin line (if any) separates them. Earlier this week, a United States’ Court had issued a warrant of arrest for Nigeria’s Deputy Commissioner of Police, Abba Kyari, over his role in serial crimes allegedly committed by a US-based Nigerian internet fraudster, Ramon Abbas, more commonly known as “Hushpuppi”. Otis Wright of the United States District Court for the Central District of California had ordered the Federal Bureau of Investigation (FBI) to track down Kyari and produce him in the United States for his role in a multi-million dollar fraud.

This directive having been communicated to the Nigerian authorities, the following breaking news then emerged: Hushpuppi: IGP Orders Internal Review of FBI’s Allegation Against Abba Kyari. ThisDay Newspaper’s version of the news report stated: “Apparently stunned by the scale of allegations of corruption, abuse of power and torture of suspects, leveled against one of Nigeria’s most decorated police officers, Deputy Commissioner of Police (DCP) Abba Kyari, by Federal Bureau of Investigation, FBI, the Inspector General of Police, Usman Alkali Baba, has ordered an internal review of Kyari’s involvement, in a series of crimes committed by a notorious internet fraudster, Ramon Abbas otherwise called Hushpuppi”.

The order for an “Internal review” appears to have not gone down well with most Nigerians some of whom think this was an attempt to sweep the current matter under the carpet “in the usual Nigerian way”. Many have thus called for an outright suspension or dismissal of the once-popular “super cop”, advising the Inspector General of Police (IGP) of the Federal Republic of Nigeria to thereafter hand him over to the USA counterparts without any delay.

I respectfully disagree with this line of thought; I agree with the decision by the IGP in favour of an Internal review. Those who are opposed to such appear to have forgotten that Nigeria is a sovereign county with a full independence status; Nigeria is not a State in America. Thus, we don’t and should not just swallow, hook line and sinker, without scrutiny, anything that comes from the white man, and then begin to act just like that.

There is a wise need for some brief/swift internal review process to be instituted in order to forestall hasty actions and faulty conclusions that may lead to grave, regrettable errors on our part. The Presumption of innocence requirements of our adversarial criminal justice system demands that we exercise due care and caution to avoid mistakes because the accused, however damning the evidence is, remains innocent until proven guilty in Court.

He’s thus entitled to the benefit-of-the-doubt right, which is a basic right in criminal Investigation and trial. Many have however asked whether DCP Abba Kyari himself ever cared about “benefit-of-the-doubt” during his actions as a cop. Two wrongs don’t make a right, dear Nigerians!

From Media reports, the evidence being presented against “super cop” DCP Abba Kyari by US investigators, appears overwhelming but all the allegations having been flatly denied by CSP Abba Kyari, the benefit of the doubts usually required to be given to any person accused but no yet convicted of a criminal offense, demands that all reasonable steps be taken to avoid falling into decisions and conclusions that might put a question mark on our sovereignty and independence, or otherwise present us as a mere appendage of the USA.

Accordingly, let the internal review be conducted. After all, if Abba Kyari was an American citizen, resident in America and a court in Nigeria issued a summons against him (for America to produce him), would America hand him over to Nigeria (that’s, if they’d listen to us at all) without some internal review in its own country? Furthermore, planned internal review by Nigerian Police authorities doesn’t foreclose trial before a competent court in America or in Nigeria.

What the IGP has done, in ordering an internal review, is natural; it’s like a father who has got a letter from the police that his own son has committed an offence and is wanted at the police headquarters. The first thing the father should do is to call his child and ask the child some questions to ascertain some facts before handing the son over to the police.
Asking the son such questions to hear from him (ie., internal review) before handing him over, does not prejudicially affect Police investigation or court’s competence to try him, when he is finally handed over and listed for trial after an indictment (if any). Justice delayed is justice denied; but justice rushed is justice crushed. Thank you, IGP, for this pragmatic step taken.

This said, it’s equally (if not more) important that the right things be done and the right decisions taken and swiftly too, in the best interest of rule of law and justice. Time is of the essence! The highly discerning world is watching. And in this matter, based on the published revelations and allegations, nothing short of justice done and seen to be done, will be acceptable to men of goodwill and conscience, and people of honour. This is not a Nigerian thing; hence the Nigerian factor should have no place in it, else we’d make complete mess and mockery of ourselves.

The affected “super cop” must be made to face justice if found culpable. A country that went to “intercept” a self-determination-agitating Nnamdi Kanu in faraway Kenya while also asking and threatening Benin Republic to release to it for trial in Nigeria, a fighting-for-survival-of-my-people Sunday Igboho, may not be morally or legally (even “commonsensically”) justified to refuse to hand over to FBI a “native-clothes-selling” super cop DCP Abba Kyari, to answer to heavy criminal and corruption changes against him in the USA. Quod Approbo Non Reprobo must therefore stay out of this matter. But Nigeria’s IGP’s directive is the first step. Fellow Nigerians, please let the first things be done first, but let the second not fail to follow, where necessary!

Please, dear Inspector-General of the Nigerian Police (IGP), let the internal review take an accelerated form in view of the gravity of the criminal allegations involved and their implications for Nigeria, especially in view of our steadily dwindling fortunes and image and the need to save whatever is left of Nigeria’s anti-corruption posturing. I just hope the impression is not already created (among reasonable bystanders) that those who champion the Anti-Corruption crusade in Nigeria are themselves the corruption they should fight against.

I hope and pray oo. Steve Magee was once of the view that corruption persisted and blossomed in some countries because, in those countries, perhaps, “Corrupt governments are run by corrupt politicians that run corrupt law enforcement agencies.” If there’s any sense in Steve MAGEE’s suggestions, then the Georgian politician and diplomat, Eduard Shevardnadze was in order: “Corruption has its own motivations, and one has to thoroughly study that phenomenon and eliminate the foundations that allow corruption to exist.” To solve this problem, Mark Twain threw a somehow hillarious suggestion: “Politicians and diapers must be changed often, and for the same reason”.

A Turkish playwright and writer, Mehmet Murat ildan gave what I consider a second alternative: “Instead of politicians, let the monkeys govern the countries; at least they will steal only the bananas!”. Rigoberta Menchú, a Nobel Prize laureate on his part, has this suggestion: “Without strong watchdog institutions, impunity becomes the very foundation upon which systems of corruption are built. And if impunity is not demolished, all efforts to bring an end to corruption are in vain.” Below was President Vladimir Putin’s idea: “those who fight corruption should be clean themselves”. Yes, because the impure cannot purify the unclean! It’s pretty much easier for a good apple to be made bad by a bad apple than for the bad apple to get made good by the good apple. Whether “super cop” DCP Abba Kyari’s case with Hushpuppi won’t turn out to be a typical illustration thereof, is only a matter of time!

Meanwhile, some say power corrupts and absolute power corrupts absolutely. But Chief Obafemi didn’t like it that way; thus in his Voice of Wisdom: he had declared: “power enslaves and absolutely power elslaves absolutely”. Thres is yet one person, among many, who don’t seem to agree with “power corrupts”. William Gaddis is among them. In his opinion, “Power doesn’t corrupt people, people corrupt power”. This perhaps is why Leo Tolstoy put forward a somewhat radical idea: “since corrupt people unite among themselves to constitute a force, then honest people must do the same”.

Anyway, this Abba KYARI matter must be handled carefully. You recall there was the WADUME SAGA revealing complicity in high official places; then the Ibrahim Magu’s EFCC rotten issue which drew a huge pot of mud on his EFCC-led Anti-Corruption agency/crusade. And now this unpalatable story about a “super cop”, DCP Abba Kyari, who in Nigeria, is rated five-star in the anti-crime fight in Nigeria. All in all, my humble take is that this appears to not be the best time for Nigeria nor the best time for anyone to brag about as a Nigerian, although I happily do because I am and remain a proud Nigerian, with fingers crossed. We pray for the best, hoping things don’t get worse. So help us, God. Amen!