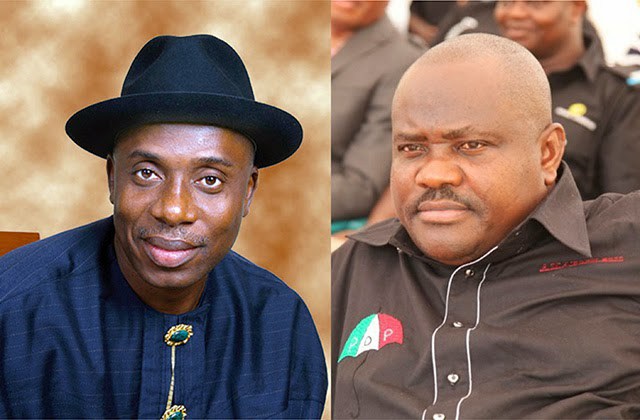 The fight between the Minister of Transportation, Rotimi Amaechi, and the Rivers State Governor, Nyesom Wike, has got messier, with the Federal Special Anti-Robbery Squad (F-SARS) supported with purpose-built office complex in Port Harcourt, when Amaechi was governor, suddenly given quit notice by officials of Wike’s local government council.

The quit notice came from Obio/Akpor Local Government Council of Rivers state, where Wike, a former Minister of State for Education, hails from, through the council’s Legal Adviser, Victor Owhonda Wokem.

Wike, who is a chieftain of the Peoples Democratic Party (PDP), and most leaders of the PDP decided to declare war against the Commander of F-SARS in Rivers state, Akin Fakorede, a lawyer, for allegedly refusing to support the plans of the PDP during the December 10 last year’s legislative rerun.

Fakorede, who hails from Ekiti State, in a telephone interview, however, declared that the security outfit would never vacate the facility given to it by Amaechi’s govt on August 23, 2012, asking officials of the local government council to desist from making false claims.

While also speaking on the telephone on Friday, the Caretaker Chairman of Obio/Akpor local government council, Goodnews Ozioma Amadi, a member of PDP, who was recently appointed by Wike for three months, with the possibility of being reappointed for another three months, if she performs optimally, in her reaction, said: “It is a legal matter. It is being handled by the council’s Legal Adviser.”

The Rivers state chapter of the All Progressives Congress (APC), through its Publicity Secretary, Chief Chris Finebone, in Port Harcourt, said: “Of course, this is one of the clearest evidence of the war of attrition being waged by Wike and his government against the F-SARS in Rivers State. It is a development foretold by discerning minds.”

Rivers APC also claimed that Wike was fighting F-SARS in the state and Fakorede, because of 2019 elections and the governor’s vice-presidential ambition in 2019, with the state’s commander of F-SARS having earlier allegedly refused to be bribed to support the massive rigging of the December 10 last year’s legislative rerun in Rivers.

The quit notice from Obio/Akpor local government council, located in Rumuodomaya, Port Harcourt, and the reply of F-SARS, both on their colourful letterheads, were obtained on Friday in Port Harcourt.

Wokem (LG legal adviser) said: “I am directed by the Local Government Council to give you one month notice to vacate and deliver up possession of the premises/property of the Obio/Akpor International Market, which you presently occupy, as a licensee thereof, on or before 30th day of November 2017.

“This directive is borne out of the council’s need to carry out major renovation works at the international market and to put the said property, which you occupy, into full use and purpose for which it was originally acquired and built.

“Take further notice that in the event you fail, refuse or neglect to abide by this notice, the council shall have no option, but to use all available legal means to eject you there and demand consequential damages. Please, be guided accordingly.”

Copies of the Obio/Akpor local government’s quit notice were sent to Wike; the Inspector-General of Police, Ibrahim Idris; and the Rivers Commissioner of Police, Zaki Ahmed.

The quit notice, which was received by F-SARS, Rivers state on October 19, 2017, was stamped and signed by one of the officials of the security outfit, without the name indicated.

F-SARS, Rivers state, in its reply, dated October 19, 2017, and signed by its commander (Fakorede), a Chief Superintendent of Police (CSP), accused the officials of Obio/Akpor local government council of being economical with the truth.

F-SARS said: “I refer to your letter dated October 18, 2017 on the above subject matter and wish to respectfully inform your good office that the Rivers State F-SARS is not in possession or occupation of any premises/property of Obio/Akpor Local Government.

“For the purpose of clarity and the avoidance of doubt, the F-SARS is presently occupying a purpose-built police facility, constructed for the police and officially handed over to the F-SARS, Rivers State on August 23, 2012 by the Rivers State Government, under Rt. Hon. Rotimi Chibuike Amaechi, then Governor of Rivers State.

“You are kindly requested to advise your client to desist from making false claims. Please be advised.”

Fakorede, in yesterday’s telephone interview, also stated that F-SARS purpose-built facility had standard police station, cells, offices and residential quarters for officers and men, among other facilities to enhance the smooth operations of the special security outfit, while declaring that there was no way F-SARS could quit the facility it had been occupying for over five years.

Rivers Commissioner for Information and Communications, Emma Okah, at a news conference in Government House, Port Harcourt, accused Fakorede of taking sides with the leaders of the APC, while calling for his transfer out of the state.

Okah drew the attention of President Muhammadu Buhari, other Nigerians and the international community to the alleged atrocities committed in Rivers by F-SARS, under the command of Fakorede and the alleged deliberate refusal of the IGP, as well as the Police Service Commission (PSC) to reprimand or transfer the commander of F-SARS in the state.

Information commissioner said: “Rivers State government is not after the person of Mr Akin Fakorede, but the odious methods he employs in doing his job and the consequences.”

APC in Rivers, however, accused Wike and his allies of lying outright, in their declaration of war against the hardworking, focused and professional commander of F-SARS in the state.

The main opposition APC in Rivers said: “The accusation by the Rivers State government is complete nonsense. If the police and particularly former Commissioner of Police, Mbu Joseph Mbu, were the armed wing of the PDP to tackle the former Rivers State Governor, Rt. Hon. Chibuike Rotimi Amaechi, years back, it does not by any means follow that APC today needs such an aberration or unholy alliance. We are a party of change.

“APC has no special relationship with SARS or any security agency in the colour being painted by Wike and the PDP in Rivers State. We are happy that the Rivers State government and PDP in Rivers State have come out to unveil the real reasons they are battling SARS and its Commander, Akin Fakorede. They have spelt it out that it is all about 2019.

“APC as a political party sensed it all along. We will not be surprised if the police high command already knows why PDP and Wike are whining, huffing and puffing about SARS and Akin Fakorede. Now, it is crystal clear who is politicising security in Rivers State and why the best efforts of the security agencies appear not to be achieving the desired results.”

It will be recalled that Amaechi, a former Chairman of the Nigeria Governors’ Forum (NGF), had been at loggerheads with Wike, his former Chief of Staff (2007-2011), who was the Director-General of Amaechi Re-election Campaign Organisation in 2011, before the then Rivers governor (Amaechi) recommended him (Wike) to the then President Goodluck Jonathan for ministerial appointment in 2011, over who would be Rivers governor in 2015.

Amaechi, an indigene of Ubima in Ikwerre LGA, stated that to ensure equity, justice and fairness in the multi-ethnic state, it would not be proper for another Ikwerre person/Uplander to succeed him in 2015, while opting for a riverine successor, but Wike, also an Ikwerre from Rumueprikom in Obio/Akpor LGA of the state maintained that emphasis should be placed on competence and capability to win elections, not zoning.

Amaechi stuck to zoning between the upland and riverine parts of the state, leading to the emergence of Dr. Dakuku Peterside, from coastal Opobo, the headquarters of Opobo/Nkoro LGA of the state as the standard bearer of the APC, but he was rigged out, while he got favourable judgment at the Court of Appeal, Abuja, with Wike emerging victorious at the Supreme Court.