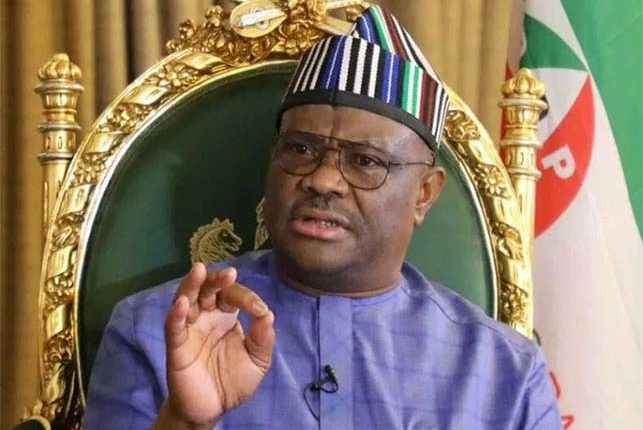 Wike said that as far as Rivers State is concerned, Amaechi was unable to attract any meaningful project to the state in seven years while he served as a minister.

Governor Wike was speaking in reaction to comments by the former minister that the Rivers State government refused to give state burial to late the Chief Alabo Tonye Graham-Douglas, who was laid to rest last weekend.

He used the occasion of the formal inauguration of the reconstructed former Riv- Bank Insurance building in Port Harcourt on Monday, to lampoon the former minister.

Governor Wike stressed that a man who has failed in attracting projects to his state and has exhibited poor leadership within his depleted party, should hide his face in shame and stop talking about Rivers politics.

“We have taken all your people. Nobody is in your party again. Why not manage and stay quiet, because of your poor leadership.

“Tell Rivers State people, as Minister of Transportation, what did you do for your people? Seven good years, all you were interested in was doing business with CCECC, doing standard gauge and the other gauge until now, we have not seen anyone in Port Harcourt to Maiduguri.”

Governor Wike boasted that while he was a junior minister, he attracted the Faculty of Law to the University of Port Harcourt, and established the Oil and Gas Polytechnic in Bonny.

He also said he made grants available to Kenule Saro- Wiwa Polytechnic in Bori and Ignatius Ajuru University, while renovating several secondary schools in Rivers State. “Tell us, as a grade A minister, what you brought.

You think you can deceive Rivers State again?” Governor Wike said the state government stayed away from the burial activities because it was politicised and he did not want to be associated with such trivialities. “I saw you people have brought politics to the man’s burial.

I said, ok, let me withdraw myself. I don’t want to be involved in this kind of politics.”

Governor Wike stated that if people had gone to bury the dead, they would have focused on that mission of honouring the dead and involved him in the talks around the event.

“Let me us this opportunity to say that I am very disappointed that the former Minister of Transportation, Chibuike Rotimi Amaechi, will still come to the state to talk about this government not giving the late Alabo Tonye Graham-Douglas a state burial

“It is unfortunate. I asked him, when Chief Alabo Tonye Graham-Douglas was sick, where were you? This state government committed so much amount of money to make sure Chief Alabo survived.

“I want to challenge anybody, we did not spend less than N50 million to make sure our elder statesman survived. It was survival we wanted, we wanted him to be alive.

When his late son had an accident, and was flown to London, this state government bore the cost of it. Go and ask people.”

Governor Wike recalled that it was this same Chibuike Amaechi, who is now showing he loved Chief Alabo Tonye Graham-Douglas more, that refused to honour him while he was alive.

The Rivers State governor said, “Chibuike Amaechi declined to grant the request of Chief Alabo Tonye Graham- Douglas for the elevation of the Abonnema traditional stool to first class and construction of Abonnema ring road.”

But, on assumption of office, Governor Wike said he has granted those requests.

“Amaechi, Chief Alabo Tonye Graham-Douglas told you, please, help me and do the ring road in Abonnema so that when we have occasion, we will not be parked on one road, you refused to do it. I did it.

“When Chief Alabo Tonye Graham-Douglas was alive, he told Amaechi, why not do this Trans-Kalabari Road.

He did not do it. I am the one doing it. So, who is the man who loves Alabo and has made him happier?” Speaking further, Governor Wike also recalled how Chibuike Amaechi deceived prominent Rivers elders to who he professed love but refused to honour them.

Governor Wike also pointed to the deception the former minister meted to the late Captain Elechi Amadi, who despite their relationship, failed to keep his words.

“Before he (Elechi Amadi) died, you said you are going to build Faculty of Humanities in his honour.

That one, you tried to lay block, but you abandoned it. I came and completed that building. Even when everybody knows you have interest in his family.

“When Captain Elechi Amadi died, there was no road to his house for a man you said you love. I came and sent MCC to go and do that road.

That road was done and that was how Captain Elechi Amadi was buried. So, you (Amaechi) should be ashamed of yourself.”

Commenting on the project, Governor Wike said the building that was long abandoned was an object scrambled by people who wanted to own it.

The governor disclosed that Amaechi has been making concerted effort to stall the fraud charges brought against him by the Rivers State government. According to him, even if his administration is unable to prosecute the former minister, the next government will accomplish the task.

Governor Wike made a specific appeal to Mr. Herbert Wigwe, the Group Managing Director/CEO of Access Bank Plc, to consider buying the seven-storey office complex and use it as the regional headquarters of his firm. The governor also called on other investors to consider investing in the property.

In his address, the Rivers State Commissioner for Special Projects, Deinma Iyalla, said the seven-storey building is purpose built facility that could serve as office spaces and banking services.