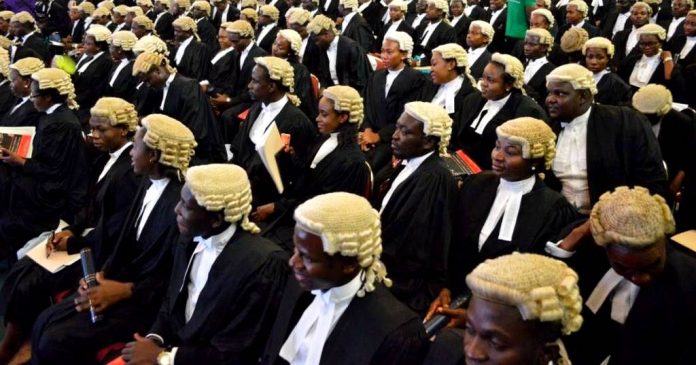 A group of lawyers under the auspices of Lawyers Network for Bola Ahmed Tinubu (LANBAT) have urged Nigerians to allow court to determine allegations against the APC Presidential candidate, Bola Tinubu.

The lawyers, who made the call at a news conference in Abuja, said  the growing trend of blackmail and name-calling was against legal procedures.

Mr Sufyanu Sai’du a co-convener of the conference, said opponents were more concerned with blackmailing Tinubu and his running mate Kashim Shettima, rather than ensuring issue based campaigns.

He said, “the latest of this infantile attack is the issue of Order of Forfeiture by the United States Government.

“This order of forfeiture is of funds in some accounts bearing the name of Bola Tinubu. This has no substance in law at all.

“The opponenets have consistently thrown out offensive and defamatory statements attacking the man of an unequalled antecedents in governance above them,” he said.

Sai’ du said the deviation from issue-based campaigns frivolities, often subjected Nigeria to ridicule before the international community and must be discouraged.

He said they were duty-bound as lawyers to educate and remind Nigerians and the international community that Nigeria was a sovereign state.

“The sovereign activities of another country should not be allowed to drive our legal and political internal activities.

“Democracy must be built through an open society that shares information.

“When there is information, there is enlightenment and ccasionally the truth stands alone, and is sought through debates, and constructive dissection of facts.

“By this means, we prevent the abuse of information, defeat ignorance, ensure accountability and strengthen democracy,” he said.

He eschewed the outstanding qualities of the APC presidential candidate as well as his direct engagement with the private sector, professional bodies, farmers, women and youths among others.

Sai’du said it was only the candidacy of Tinubu and Shettima that had provided the electorate with clear manifesto and action plans.

According to him, laughably and pitiably, one of the candidates has told the world that his manifesto is in his head even in less than 100 days to the election.

“Nigerians must be watchful and weary of opportunists and people who do not appreciate our history.

“So, beyond the cheap blackmail and propaganda, Tinubu and Shettima team is that of men who have their history in the public sphere as legislators and governors, unlike the other major contenders,” he said.

The co-convener, said Tinubu and Shettima were pathfinders, consistent, brave and blunt and were dogged fighters.

He said that they were a team of leaders that harness potential, irrespective of ethnicity or religion.

“As lawyers and social engineers, we assure you a vote for Bola Tinubu and Kashim Shettima is certainly a vote for a better and prosperous Nigeria.”

On their role as lawyers in the electioneering process, the co-convener said they would continue to engage electorate for proper guidance on their choice of candidates.

Recall that some of the co-conveners, Mr Adedotun Ajulo, Mr Olalekan Adeshina and Mr Kayode Mogbojuri, harped on need to seek legal redress in matters.

They said while Nigerians were free to investigate any candidate, it was proper to allow the court determine any form of allegation against any of the candidates.

They said it was impossible to convict anybody without a charge number, adding that they were yet to see any of such against the APC candidate.

The co-conveners commended Nigerians, who had approached the court over some of the allegations against Tinubu, saying that was the way to go