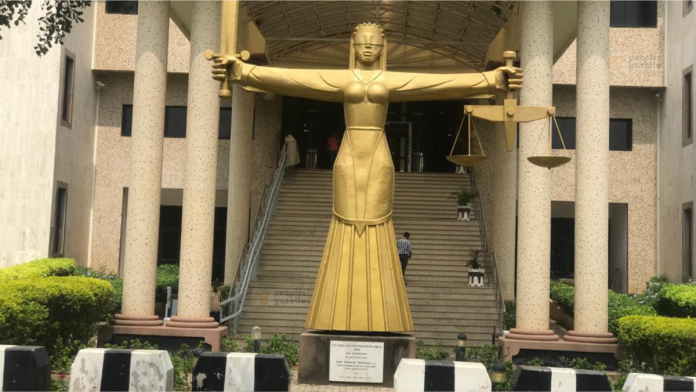 Hearing of a suit filed by a staff, Funmilayo Omosule, against the Oil and Gas Free Zone Authority Administration (OGFZAA) over his alleged unlawful suspension was on Tuesday stalled at the National Industrial Court, Abuja.
Justice Olufunke Anuwe, adjourned the matter until Feb. 1, following the absence of OGFZAA’s counsel in court.

“We were hoping for the defence to file so that we can respond. Unfortunately, we are still waiting for them to file,” she said
Besides, Uzoanya said that the defence lawyer was not in court.

She said the court registrar told her that the defence lawyer sent a message that he had a pre-election matter in Gombe.
The judge, however, told Uzoanya that the failure of the defence counsel to file their final written address should not stop the claimant from filing his.

It was reported that Omosule and OGFZAA had been locked in a fierce legal battle to resolve the legality or otherwise of his suspension, following his petition against some management staff of the agency on alleged corruption.

OGFZAA had, via a letter dated April 18, 2011, suspended Omosule as the manager of its Abuja office on the grounds that he had refused to comply with its letter dated December 3, 2010, which had directed him to present the originals of his credentials for verification.

Omosule, however, refuted the claim of the authority, stating that he made available to the defendant CTCs of his educational certificates/credentials, including GCE ‘O Level certificates and degree certificates as instructed.
Omosule had claimed that the originals of his credentials were misplaced in untraceable circumstances as at 2010 when the report to submit originals was made.

The claimant also averred that the CTCs of his certificates submitted to the defendant were certified by the issuing institutions, which included the West African Examination Council (WAEC) and the University of Ado-Ekiti, then Ondo State University, Ado Ekiti, respectively.
The claimant is seeking the court‘s declaration that he was still a staff of the organisation and entitled to all the rights, privileges and benefits due to him by reason of his employment.

He is praying the court for an order directing the defendant to reinstate him to the position of a director, on grade level 17, a position he claimed his contemporaries were holding currently.
Omosule is equally seeking the order of the court to direct the defendant to pay all his outstanding salaries, benefits and entitlement since 2011 and to also order the defendant to pay him the sum of N50 million as exemplary and general damages.