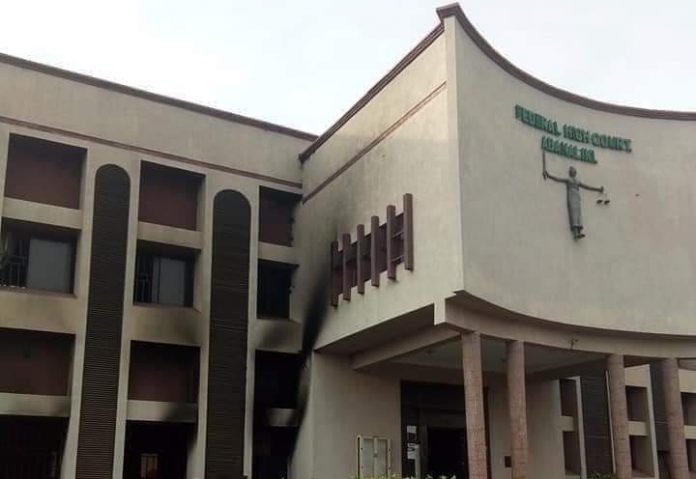 The arraignment of former Aviation Minster, Stella Oduah, on Monday, suffered setback in a Federal High Court, Abuja over a letter from the Office of the Attorney-General of the Federation (AGF) calling for the case review.Recall that Justice Inyang Ekwo had, on Oct. 20, fixed today for the arraignment of Oduah over allegations bordering on fraud while she served in the office.

Oduah, who currently represents Anambra North Senatorial District at the National Assembly and eight others, were expected to be arraigned by the Economic and Financial Crimes Commission (EFCC) on alleged N5 billion fraud and financial misappropriation.When they were about to take their plea to a 25-count charge, a defence counsel, Oguh Onoja, raised an objection in open court.

Onoja informed that a petition had already been written to the AGF, complaining that the defendants were just been persecuted.He explained that a letter from the AGF to the EFCC had called for the review of the matter, but that the anti-graft agency had refused to return the case file to the AGF as requested by his office.

Onoja then presented the certified true copy of the letter to the judge.“My lord, we are of the strongest view that plea cannot be taken on this matter. “There was a petition written to the Attorney General of the Federation which is a complain made against this prosecution because we found out that this trial was a persecution and we got a response from the AGF.“The AGF requested for the file and up till now, the EFCC has refused to send the case file to the AGF.

This case is a matter of persecution and is not a prosecution.“Based on that, we have the objection that this plea cannot be taken.“I have a certified true copy of the letter from the AGF written to the EFCC,” he said.Counsel to the EFCC, U. Uket, disagreed.He contended that even though he was just seeing the letter, a petition could not stop a plea from being taken.“The AGF has powers to intervene, continue or discontinue a case.“The fact that a petition has been written to the AGF does not stop the plea from being taken,” he said.

Justice Ekwo noted that a constitutional issue had been raised and he was not going to deal with it “summarily.”“Upon this matter coming up for plea today, the attention of this court has been drawn to a letter from the Chambers of AGF, dated February 4 and written to the acting chairman of the EFCC requiring that the file of this matter to be remitted to the AGF for a review of this case.“I have heard the arguments from counsel.“I am not going to treat this matter lightly.“Therefore, I make an order that the prosecution shall file and serve a written address on this matter within 30 days, which will be limited to 15 pages.“Learned counsel of the seventh defendant are to file a response.

NAN reports that Justice Ekwo had, on July 12, threatened to issue a warrant of arrest against the former minister if she failed to appear in court by the next adjourned date (Oct. 19).The judge had given the warning after the EFCC told the court that Oduah and one other defendant were not in court to take their plea.Other defendants in the suit include Gloria Odita, Nwobu Emmanuel Nnamdi, Chukuma Irene Chinyere, Global Offshore and Marine Limited; Crystal Television Limited, among others.