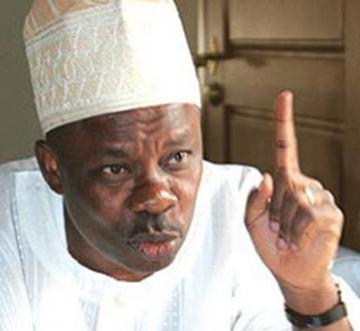 The Ogun State Governor, Senator Ibikunle Amosun, saturday said the open declaration of support for former Vice-President Atiku Abubakar by the Minister of Women Affairs and Social Development, Senator Aisha Alhassan, could affect the minister’s contribution to the vision and development of the Muhammadu Buhari government.

Amosun, who described the situation as disappointing, however, noted that while he admired Alhassan’s courage for openly coming out to side with Atiku, she should have also followed through such an act of courage by honourably resigning her position as minister.

Alhassan had last week, during a Sallah homage to the former vice-president, said she would support Atiku and not Buhari in the 2019 presidential election, while at the same time reiterating her commitment to the Buhari presidency.

But the Ogun governor, who spoke in Abeokuta yesterday found the development preposterous, saying while he saluted Alhassan’s courage, the minister should have first resigned before even making such statement.

According to him, “Though she is entitled to her own opinion at any point in time, she should have just resigned her appointment, because her loyalty cannot be in two places. Her falling short of resigning takes everything away from what she said and it is clear that she will no longer be contributing to the development of the present administration.”

On whether or not the president would seek re-election in 2019, the governor said, “The only thing that can prevent President Muhammadu Buhari from contesting is if his health cannot take it.

“If not for this present administration, only God knows where Nigeria would have been. When the government came on board, it was like jumping into the pool at the deep end,” he added.

It was against this backdrop that Amosun scored the federal government high in its fight against insurgency, insecurity, corruption as well as efforts at economic recovery through serious diversification drive.

In another interview with the BBC, Amosun insisted that since no one could faithfully serve two masters, it would have been more honourable for Alhassan to resign after making that public statement.

“Yes, I would have saluted her if she had resigned but falling short of resigning has taken everything away from what she had said.”

Asked if the president should sack her since he could no longer trust her loyalty, Amosun said, “Well, I am not Mr. President and I know that at the appropriate time, he will review things.

“For somebody to have come out and say such thing means clearly she is even working against the government and she will not want that government to succeed, yes, that is my own believe although I may be wrong, however, if I were in her shoes, I would have resigned after making that statement,” Amosun added.