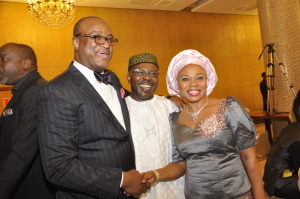 The cavernous and elegant interior of the Main Conference Hall of the posh Oriental Hotel in Lekki, an up-market suburb of Lagos, Nigeria was a delightful ambience of golden and brown hues on Sunday, the 10th of August, 2014, as family, friends, associates and well-wishers of Augustine Oyarekhua Alegeh, a senior advocate of Nigeria (SAN) gathered to felicitate with him on his election, just days before, as the president of the Nigeria Bar Association, NBA. It was, in fact, a double celebration – because apart from marking this historic milestone in his eventful legal career, it was also the occasion of Alegeh’s 50th birthday.

The event was graced by some of the most accomplished personalities in Nigeria and beyond, and especially by members of the celebrant’s immediate constituency, as lawyers came with their friends and loved ones to express their warm feelings of respect and solidarity with the man they had just chosen to be their primus inter pares, servant and advocate for the next two years. The fête was a veritable showcase of sartorial splendor and an understated sense of style on the part of the guests, male and female alike. The brilliant finery was complemented by the food, wine and music on offer, as well as by the conviviality in the atmosphere as guests mingled and made small talk. The arrival of the man of the hour, accompanied by his family, marked the commencement of the evening’s festivity.

Anchored by ace comedian Gordons, the event got underway with opening remarks by Mr. Richard Okumagba, a childhood friend of the celebrant’s. Other friends and associates later took the podium to recount and laud the sterling qualities of the new NBA helmsman. Among the most emotion-laden of these testimonies and personal insights into the essence of the man, Augustine Alegeh, was that of the celebrant’s daughter and the eldest of his four children, Salma.

Those encomiums of his friends, associates and his nearest and dearest were far from misplaced, because it is clear to see that in his half-century’s life journey, Austin (as he is known to his teeming admirers) could not have posted the achievements he has had so far without the most remarkable of personal qualities, attributes and philosophies of life. Born in Warri, in what is now Delta State on the 10th of August 1964, Augustine Oyarekhua Alegeh, Okarigbo in the Estako West LGA in today’s Edo State, is the son of the retired DCP and Mrs. Matthew Alegeh (both now deceased). He had his early education in Benin City and Warri – a period which included a brief stint at a seminary, apparently in hopes of becoming a priest. The path that would take him to the commanding heights of his glittering legal career began in the University of Benin, from which he graduated with a degree in law in 1985. He was called to the bar the following year, after the mandatory one-year period at the Nigerian Law School in Lagos, where his outstanding performance won him the prestigious Bola Ajibola Prize for Civil Procedure.

Austin is well-known among those who know him as a man who never does anything worthwhile half-heartedly – whether at work or at play. That single-mindedness is also the hallmark of his family life as the devoted husband of Mrs. Ferishat Alegeh and a doting father to their three daughters – Salma, Kamila and Ochuwa – and son, Oshioke.

The cutting of Austin Alegeh’s 50th birthday cake was preceded by a rousing performance by Nigerian hip-hop star, Wande Coal, as the celebrant and his wife were joined on the podium by luminaries such as business moguls Alhaji Aliko Dangote, Mr. Femi Otedola and others. Further speeches of commendation and good wishes for the health, happiness and prosperity of the celebrant and his family were later made by Alhaji Dangote and Access Bank boss Aigboje Aig-Imoukhuede.

The rest of the evening was taken up by entertainment, wining and dining, as the cream of lawyers feted their new leader, helped themselves to the generous buffet and wine on offer, and spent the rest of the night proving that lawyers can do more than file suit and argue cases, i.e. dance to contemporary Nigerian pop music with a dexterity that would put a Michael Jackson to shame.

This is wishing Augustine Oyarekhua Alegeh, SAN, FCIArb, a successful tenure at the helm of the Nigeria Bar Association (especially at this critical juncture in Nigeria’s political evolution) and 50+ more years in the service of God, country, the law and humanity as a whole.