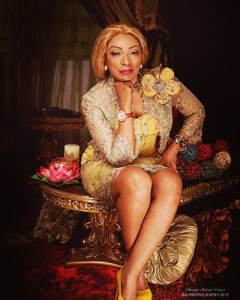 Former First Lady of Akwa Ibom State, Uduak Abasi Umondak, is bereaved. Her grief is occasioned by the death of her only child, Victoria Nkanga Herman.

The ELITES report that Victoria suffered a cardiac arrest in the United States. The 40-year-old lady never recovered from it, as she died On 2 October, 2017.

Victoria was Uduak’s only child from her marriage to Nsikak Nkanga, the former Military governor of Akwa Ibom state.

She was was buried in the USA, where she had lived almost all her life. The funeral service took place on Monday, 9 October, 2017, at Capital Christian Fellowship. 10411 Greenbelt, Lanham, Maryland, USA.

Her parents were in attendance. Victoria is survived by a son. Fondly called Udy by her friends, Uduak, a celebrity talk show host and former fashion designer whose multi-million naira outfit, COLOURS was gutted by fire many years ago, was among the stars of now rested TV series of the 80’s, Mirror in the Sun.