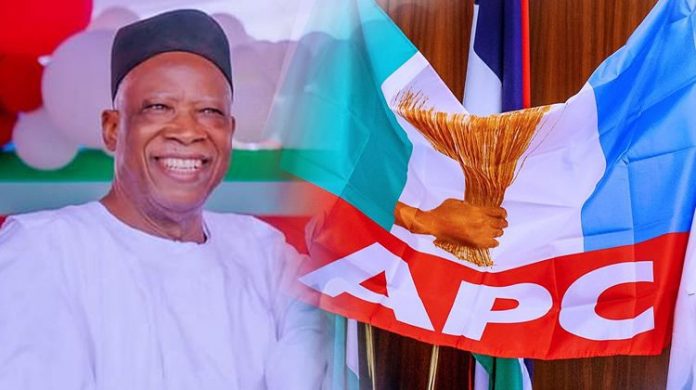 Security was beefed up at the headquarters of All Progressives Congress on Wednesday when the Deputy Director of the APC Presidential Campaign Council and seven governors met with the National Chairman of the party, Senator Abdullahi Adamu.

There was a heavy presence of stern-looking policemen roving the area as the popular Blantyre Street was cordoned off as a security measure to control both human and vehicular traffic near the party secretariat.

The marathon meeting, which started at noon, ended past 6 pm.

Although the agenda of the meeting was not disclosed, sources said it might not be unconnected with the contentious 422-man list of the presidential campaign council.

After the meeting, the PGF apologised for last week’s viral letter allegedly written by the National Chairman of the ruling APC, Senator Adamu to the party’s presidential candidate, Asiwaju Bola Tinubu, who he accused of running a one-man show.

But rising from the meeting of the Progressive Governors Forum, Presidential Campaign Council and the Adamu-led National Working Committee, PGF Chairman, Atiku Bagudu publicly apologised for the leaked letter among others, which he said were ‘mistakes.’

Addressing journalists after the five-hour political roundtable, the Kebbi governor described the letter, which he said was not authorized, as ‘unfortunate.’

He said, “We are happy that we are discussing even though there were unfortunate leaks, which the campaign council and the party have announced as mistakes that were not authorised. But I am happy that the party is solidly behind our candidate and our party and whatever leaked erroneously would soon be sorted out.’’

Adamu also addressed the media, saying the ruling party had established machinery to resolve conflictual issues to ensure “we are together on the same page with the Governors Forum, campaign council and the NWC.

When asked to disclose when the APC hopes to officially commence its campaign, Adamu called for caution.

He said, “Don’t be faster than the campaign. No matter how much in a hurry you may be, the fact of the matter is that we as a party will determine when we will do what as long as it is within the framework of INEC guidelines.”

Sources at the meeting said the gathering deliberated on the adjustment that would be done to the campaign list ahead of its final approval.