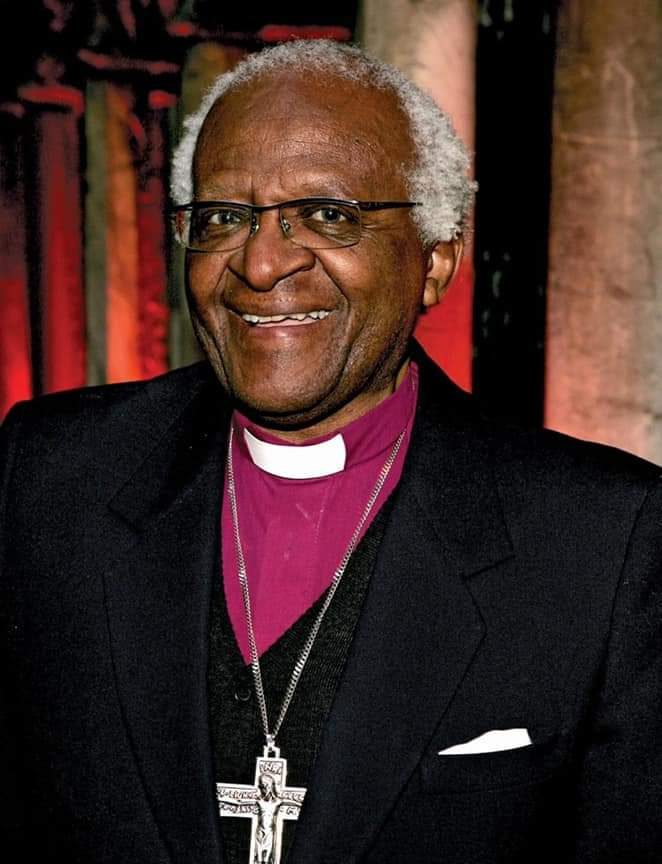 After the festivity and gaiety of Christmas Day, citizens of the global village woke up on Boxing Day to the saddening news that one of the world’s most beloved personalities, the Nobel Peace Prize-winning S/African anti-apartheid icon, Archbishop Desmond Tutu, has died at the age of 90.

South African President Cyril Ramaphosa, who officially announced the death to his nation, called Tutu a patriot without equal. Describing Tutu’s passing as “another chapter of bereavement in our nation’s farewell to a generation of outstanding S/Africans who have bequeathed us a liberated S/Africa,” Tutu, the President said, was a leader of principle and pragmatism who gave meaning to the biblical insight that faith without works is dead. Ramaphosa recalled Tutu’s role as Chairperson of the Truth and Reconciliation Commission, where he “articulated the universal outrage at the ravages of apartheid and touchingly and profoundly demonstrated the depth of meaning of ubuntu, reconciliation and forgiveness,” as well as placing his extensive academic achievements at the service of the cause for social and economic justice the world over.

“We pray that Archbishop Tutu’s soul will rest in peace,” Ramaphosa ended, “but that his spirit will stand sentry over the future of our nation.”
Within hours of Tutu’s passing, political, religious and cultural leaders, human rights activists as well as ordinary citizens around the globe were quick to pay their tributes to the late icon, whom many remembered not just for his principled convictions and the single-minded commitment with which he confronted the apartheid system of racial segregation, but also for his rich humour, infectious laughter and affinity with young people.

John Steenhuisen, leader of the S/African opposition party, the Democratic Alliance, called Tutu a true giant whose spirit will live on in the everyday kindness S/Africans showed each other, and in their continued effort to build a united, successful, non-racial South Africa for all.
“When we lost our way,” Steenhuisen said, “he was the moral compass that brought us back.”
Kenya’s President Uhuru Kenyatta said Tutu’s passing “… leaves behind huge footprints as an anti-apartheid hero … to the entire African continent where he is deeply respected and celebrated as a peacemaker.”

The Nelson Mandela Foundation also praised the Archbishop’s legacy. In a statement, the Foundation said Tutu’s contributions to struggles against injustice, locally and globally, “are matched only by the depth of his thinking about the making of liberatory futures for human societies.” It described him as an extraordinary human being, a thinker, a leader, and a shepherd.
Dr. Bernice King, the daughter of the late American civil rights icon Martin Luther King, Jr., also shared her sorrow, calling Tutu “a global sage, human rights leader and powerful pilgrim on earth.”

“We are better because he was here,” King said.
The spiritual leader of Tibetan Buddism, the Dalai Lama, said he and Tutu – whom he called a true humanitarian who lived a meaningful life – enjoyed an enduring friendship, fuelled by their common desire for reconciliation.

“He was devoted to the service of others, especially those who are least fortunate. I am convinced the best tribute we can pay him and keep his spirit alive is to do as he did and constantly look to see how we too can be of help to others.”

British Prime Minister Boris Johnson said Tutu would be remembered for his spiritual leadership and irrepressible good humour, while Norwegian Prime Minister Jonas Gahr Stoere said Tutu demonsrated the power of reconciliation and forgiveness. “Tutu’s point,” he said, “was that injustice and abuse must not be forgotten, but that at the same time it must not be avenged if a society is to move on.”

From the Vatican in Rome, Pope Francis I said he was “mindful of Tutu’s service to the gospel through the promotion of racial equality and reconciliation in his native S/Africa,” and commended the soul of the departed Archbishop to the loving mercy of Almighty God.”
From Paris, French President Emmanuel Macron said Tutu’s struggle for the end of apartheid and for reconciliation in S/Africa would forever remain in the collective memory.
In a statement, former US President Barack Obama called Tutu a mentor and a moral compass for many. Describing the late Nobel Peace laureate as ‘a universal spirit,’ Obama said Tutu was grounded in the struggle for liberation and justice in his own country, but also concerned with injustice everywhere.

“He never lost his impish sense of humour and willingness to find humanity in his adversaries,” said Obama.
Also reacting, Mexican President Andres Manuel Lopez Obrador recalled one of Tutu’s well-known sayings, which he described as terse, but forceful and true: “If you are neutral in situations of injustice, you have chosen the side of the oppressor.’”

According to the World Council of Churches, Tutu’s contagious sense of humour and laughter had helped to resolve many critical situations in S/Africa’s political and church life.
“He was able to break almost any deadlock,” the body recalled. “He shared with us the laughter and grace of God many a time.”.

Britain’s Queen Elizabeth II also reacted thus: “I remember with fondness my meetings with him and his great warmth and humour.” Tutu’s death, she said, “will be felt by the people of S/Africa, and by so many people in Great Britain, Northern Ireland and across the Commonwealth, where he was held in such high affection and esteem.”