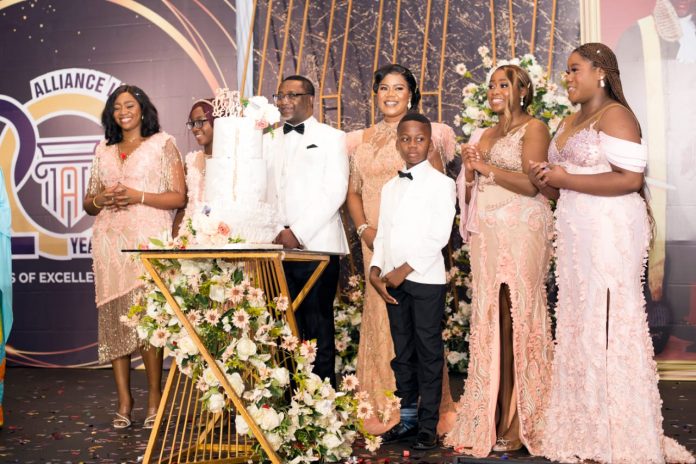 It all began with a quiet, private mass at Our Lady of Perpetual Help Catholic Church on Victoria Island, Lagos, as Uche Val Obi, SAN, his wife Lady Emmanuella and their five children were joined by other members of the family, friends, business associates and well-wishers, as well as the Partners, Managing Associates, Associates and Administrative Staff of the Alliance Law Firm in a celebration to mark the 20th anniversary of the Firm, as well as the Silver Jubilee anniversary of the union between Uche Val and Emmanuella Obi.
They also came to marking the 4th anniversary of the Annual Alliance Lecture Series.
According to NEWSWIRE Law and Events Magazine correspondent in Lagos, the short but colourful wedding anniversary mass in the Church’s cavernous ambience was a throwback to the union between the Obis a quarter of a century ago; indeed it had the feel of a wedding ceremony all over again – complete with a wedding train composed of the couple’s daughters and son.
The officiating prelate’s ministration featured the penitential rites, the liturgy of the Word, the gospel acclamation and reading, the homily and renewal of rites between Uchechukwu Valentine and Chinonyelum Emmanuella Obi, prayers, and hymns. The priest also exhorted the Obi family to keep the flame of love burning, to keep their focus on God and to seek His divine will and purpose for their lives. This was followed by the liturgy of the Eucharist, the rite of peace, Communion, and a lively Thanksgiving session which brought the Mass to a close.
The Obi family was then joined by attendees in a series of photo sessions.