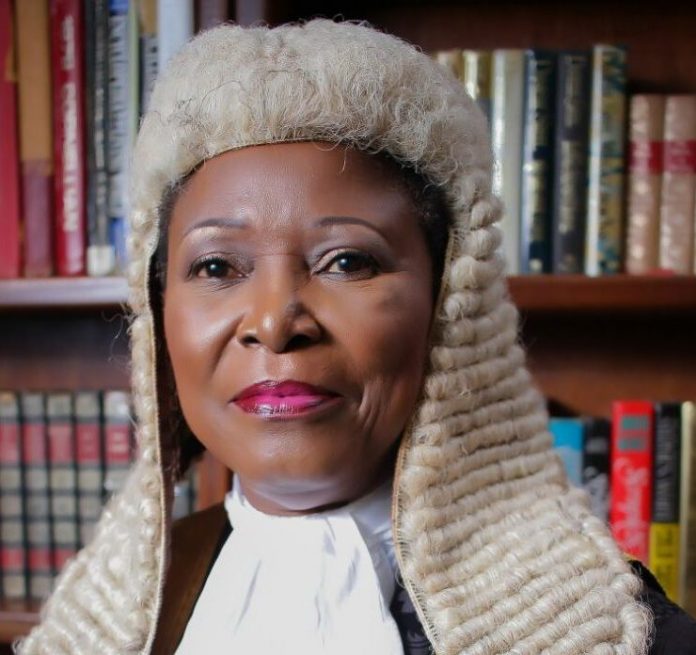 Born to the family of late Ogbuefi Hyacith Iloeje and his wife, late Ezinne Juliana Iloeje, Catholic Missionaries, on the 20th of July, 1953, Chief Offiah is the 6th and only female of her parents’ 7 surviving children. She had an early exposure to learning – from her disciplinarian headmaster father, industrious mother, her older well-educated brothers. She also had early interaction with foreign missionaries, with whom her parents worked and who constantly visited them. Thus, she had a solid background for the future ahead.

Upon graduating from the prestigious Queens School, Enugu, the young Anayo Justina gained admission to study Law at the University of Nigeria, from where she graduated in 1977. She was called to the Nigerian Bar in 1978. After her National Youth Service programme at the Ondo State Ministry of Justice, where she joined the law firm of Mogboh, Ibik & Co. Solicitors (now Mogboh & Co.), under the tutelage of the legendary Chief Anthony Okoye Mogboh, SAN, where she rose to become a Partner. She distinguished herself as a courtroom advocate and made an early career choice to remain at the Bar.

Chief Offiah’s advocacy skill is top-notch; it therefore did not come as a surprise when in 2003, she was conferred with the rank of Senior Advocate of Nigeria (SAN) – the first female to attain the rank in the entire old eastern region of Nigeria!

Her four and a half decades at the Bar has been quite eventful; one marked by service to the state, the Bar and humanity. In 1989 and 1992, she variously served as the Chairman of Anambra State Local Government Election Tribunal, Onitsha Zone and Chairman of Enugu State Election Tribunal, respectively. In 1994, she was appointed the Attorney General and Commissioner for Justice, Enugu State, under the military administration of Navy Captain Temi Ejoor, a position she held until 1997, serving under 3 (three) successive military administrators.

Chief Offiah served as Chairperson, FIDA Enugu from 1998 to 2002. She was Chairman, NBA, Enugu Branch from 2004 to 2006 (the first female chairman of the Branch) and was a Council Member of the Eastern Bar Forum from 2004 to 2012. She has been the Facilitator, Enugu State Justice Reform Team from 2010 till date. Under her leadership, the Reform Team has been responsible for various reforms in the Justice Sector, especially the notable progress made in the criminal justice system in Enugu State. She played a very active role in the establishment of the Enugu State Multi-door Court House and Fast-track Courts (ESMDC) and in the enactment of the Administration of Criminal Justice Law of Enugu State, 2017. She is the current Alternate Chair of the Governing Council of the ESMDC and chaired the Enugu State Justice Sector Reform Committee which produced the blueprint for various reforms in the State Justice Sector. Her zeal for reforms and progress in the Justice Sector has found expression in various works to which she committed time and intellect.

On my first encounter with her, I observed her unique qualities; her deliberate and carefully measured steps, her urbane manners, her refined and calculated speech – all of which speak of her inner excellence.
Chief (Mrs.) A. J. Offiah is a quintessential principal; one that takes the grooming of the younger generation of lawyers very seriously. She is concerned about the loss of values and dwindling standards in the profession. Thus, she is painstakingly mentoring lawyers to uphold and contend for the ethics and traditions of the profession. My prior meeting and interaction with some of her protégés confirmed to me her excellent and detailed mentorship.

Chief (Mrs.) A. J. Offiah is a devout catholic – married to Dr. Evaristus C. Offiah for over four decades and together they have 6 children and several grandchildren.

When asked the secret of her success in managing her home while excelling in the profession, Chief Offiah’s usual response is: “I don’t make my shopping list in the office and I don’t write my briefs at home”.

Chief Offiah is a Dame in Shining Armour – she has led the way in many aspects – and conquered territories on behalf of other women. She is an excellent role model for professional women and indeed all women, who may wish to shatter glass ceilings; break the barrier-building bias and excel in whatever field of endeavour they choose. I salute her brilliance, eloquence, resilience and her unrelenting commitment to excellence!