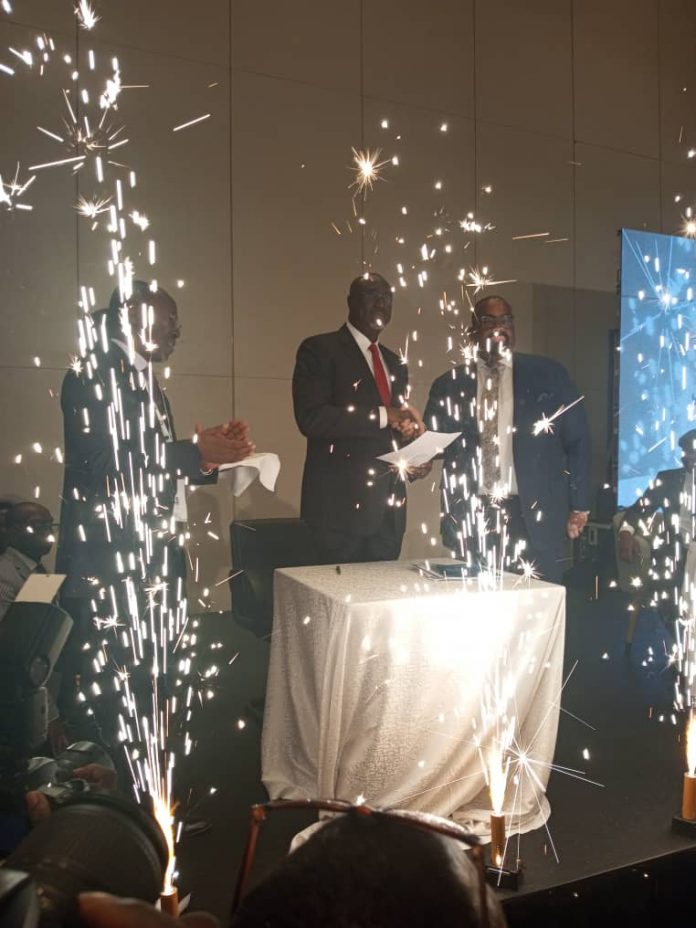 The Olumide Akpata era, during which time the Nigerian Bar Association (NBA) recorded some of the most momentous accomplishments in its long and illustrious history, finally came to an end amid fanfare in a ceremony held at the prestigious Eko Hotels and Suites on Victoria Island in Lagos.

According to NEWSWIRE Law and Events Magazine’s correspondent in Lagos, the ceremony, which also marked the conclusion of the 62nd Annual Conference of the Association, began with a recitation of the NBA Prayer by Mr. George Etomi. Anchored by the outgoing Publicity Secretary of the NBA, Dr. Rapulu Nduka and his successor, Habeeb Akorede Lawal, the ceremony was graced by an unprecedented number of dignitaries from all walks of life, including a high-powered delegation from the Kebbi State home of the new NBA President, led by Governor Atiku Bagudu, his wife, Dr. Zainab Bagudu, the Chairman of the Economic and Financial Crimes Commission, Abdulrashid Bawa, and representatives of the traditional rulers of Gwandu, Argungu and Yauri. The Shehu of Bornu also sent a representative. Former NBA President Augustine Alegeh was also a notable presence, as were the Attorneys-General of Lagos and Oyo State, Moyosore Onigbanjo, SAN and Prof. Oyelowo Oyewo, SAN, respectively. Other Senior Advocates of Nigeria also made their presence, among them Emeka Obegolu, SAN, DCP Simon Olowu, SAN and Chief Emeka Ngige, SAN. The venerable Mrs. Hairat Balogun, a former General Secretary of the NBA was joined by other past General Secretaries such as Deacon Dele Adesina, SAN; Isiaka Olagunju, SAN; and Joyce Oduah. The judiciary and legislature were also well represented at the event, which was also graced by a number of clergymen closely associated with the new NBA President. The Maikyau family – Mrs. Maikyau and their four children, namely, Israel, King David, Princess Sarah and Queen Esther – also graced the occasion in company of the wife of the former NBA President, Mrs. Osayamon Akpata.

In his final address as NBA President, Olumide Akpata praised his team for the accomplishments of the past two years, describing his tenure as ‘a humbling experience’ and a ‘steep learning curve’. “We stood in the gap for society,” he said in reference to the work of the various Sections of the NBA and Committees such as the Public Interest Litigation Committee. He expressed deep gratitude for the tremendous goodwill he received from persons and groups across the spectrum of Nigerian society, and their dedication to the cause of making his tenure a success, including outstanding young people such as his assistant, Orji Uzor. He enumerated some of the key accomplishments of the last two years to include the the collaboration between the NBA and the National Health Insurance Scheme; the institution of Access to Finance for lawyers; the establishment of the NBA Stabilisation Fund (which, he said, has so far saved about N1.2 bn); and the reactivation of the Institute of Continuing Legal Education (ICLE). The NBA, he went on to say, has taken strong policy stands to demonstrate its zero tolerance for sexual harassment and the brutalisation of legal practitioners by security agents. It has come up with a White Paper on the remuneration of lawyers, reformed its electoral system and processes (as could be seen in the success of the 2022 elections that brought in his successors), and only recently launched its Digital NBA app. The Executive under his watch had also significantly reduced the cost of governance, he said.

On a personal note, Akpata concluded humorously, “I also took a wife during my tenure as NBA President.”

The transition process commenced with the formal presentation of certificates of return to Maikyau and his team by the notary public and Chairman of the Lagos Branch of the NBA, Ikechukwu Uwanna, after which Akpata swore in Yakubu Chonoko Maikyau, SAN, FCIArb (UK) as the 31st President of the Association. The new President, in turn, swore in members of his Executive Committee.

The only surviving child of his parents (both now deceased) Maikyau had his early education in Agbor (in the then Bendel State, now Delta State) as well as in Birnin-Kebbi and his ancestral hometown of Yauri, both in what is now Kebbi State. He proceeded to the School of Basic Studies in Zaria, Kaduna State, where he majored in the Sciences in hopes of studying Medicine at University. He was subsequently admitted to study Veterinary Medicine at the Ahmadu Bello University, also in Zaria. However, an inexplicable but fortuitous accident (which he attributes to nothing other than divine intervention) found him also listed as having been admitted into the Faculty of Law of that same University. Abandoning his studies in Veterinary Medicine, he registered for Law and went on to graduate from ABU and the Nigerian Law School. He was called to the Bar in 1990.
Having cut his legal teeth in the Sokoto-based law firm of Messrs Danladi Bamaiyi & Co., where he served for 13 years, he thereafter set up his own firm, Yakubu Maikyau & Co. in 2003. He was invested with the prestigious rank of Senior Advocate of Nigeria in 2011. A Fellow of the Chartered Institute of Arbitrators since 2014, Maikyau’s extensive track record as an advocate includes a number of notable cases that have had a far-reaching impact on the Nigerian legal landscape. He famously captured the attention of the country’s legal ecosystem with his sterling work as a counsel during the proceedings of the Human Rights Violation Investigation Commission of Nigeria (commonly known as the Oputa Panel) which was set up prior to Nigeria’s return to civil rule in 1999. Prior to his election as NBA President, Maikyau was the Chairman of the Association’s Welfare Committee, as well as Chairman of the Committee on Law and Individual Rights of the Section on Legal Practice (NBA-SLP). Outside of the field of law, the NBA President is a community development and social welfare enthusiast who has touched many lives, especially in his home state of Kebbi.

Maikyau began his wide-ranging inaugural speech with an emotional tribute to his late parents and siblings (especially his late sister, Amina, to whom he was particularly close, and who sacrificed her own comfort and aspirations for his success). He also paid tribute to his recently deceased colleague on the NBA Welfare Committee, Ogaga Emoghwanren, who died suddenly on August 10, 2022 while in active duty.

Turning to the challenges facing the Nigerian legal profession and its practitioners, and the nation as a whole at this critical juncture in its history, the new NBA helmsman reiterated the critical role the rule of law plays in the protection of freedom and human dignity, without which, he said, no society can survive, let alone succeed. To this end, he said in a speech peppered with numerous Biblical allusions, the Nigerian people are ‘eagerly awaiting the manifestation’ and leadership of the legal fraternity in the struggle to actualise the enormous potential and greatness of Nigeria. He lamented the parlous state of affairs in the country at present, especially in the areas of the economy and security, and promised a robust engagement on these issues with the political leadership at both national and sub-national levels. In regard to the 2023 elections, it will not be enough, he declared, for any party or candidate to try to capitalise on the failings of the present administration to try to score political points. Only a concrete and practical manifesto of deliverables going forward will sway the Nigerian electorate.

Adding his voice to the chorus of condemnation at the incidents that took place at the venue of the just-concluded 62nd NBA-AGC in Lagos, the NBA President announced the setting up of a committee to interrogate the causes of the unrest and those behind it, under the chairmanship of the Attorney-General of Ekiti State, Wale Fapohunda, SAN.

The learned Senior Advocate of Nigeria went on to announce a number of schemes and initiatives designed to enhance the welfare and efficiency of lawyers, and to deepen their engagement with the rest of the Nigerian society. His administration, he said, would follow the progressive (nay, revolutionary) template put in place by the dynamic Olumide Akpata-led administration as faithfully as possible, especially in the areas of welfare, capacity-building and critical infrastructure.

In a departure from protocol, the occasion also featured goodwill speeches by the Kebbi State Governor, Atiku Bagudu, the EFCC Chairman, and a representative of the President of the Court of Appeal.

The event came to a close with a vote of thanks by the new General Secretary of the NBA, Adesina Adegbite.