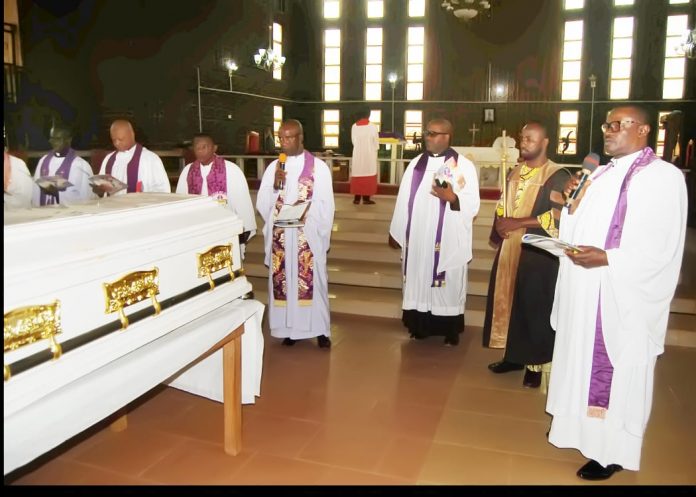 The ancient community of Awo-Idemili in Orsu Local Government Area of Imo State, reverberated to the sounds of mourning, acclamation and celebration as the remains of late Madam Comfort Nlemchukwu Ireka (nee Uzoeto) were laid to rest on Thursday, January 5, 2023.

Reverently known by all and sundry as Ezinne (Igbo for ‘Good Mother), Madam Ireka was buried at the home of her husband, Ichie Raphael Ireka (also of blessed memory) at the Ubahaezedeke Community of Awo-Idemili Town, following a well-attended funeral service in her honour at Christ Church in Awo-Idemili – an Anglican sanctuary which was her spiritual home for most of her life, and to whose service she had devoted tremendous amount of her energy, time and resources during her earthly sojourn.

NEWSWIRE Law and Events Magazine’s correspondent reports that Madam Ireka, who passed onto eternal glory at the age of 80, was the subject of glowing tributes at the funeral service from a succession of personalities who had known her during her long and eventful lifetime, notably the Anglican clergy, led by the officiating minister, Rt Rev Benjamin Chinedum Okeke JP

In his message during the service Rt Rev Benjamin Chinedum Okeke JP extolled the virtues of the late Ezinne Madam Ireka, commending her large heart and generous spirit towards all whose paths crossed hers. He praised her service to the Church and the family of believers in general, as well as her devout fidelity to the faith of Christ, which she demonstrated with many noble deeds in her respective sojourns in the town of her birth, Awo-Idemili, and in Lagos, where she had lived with her late husband and their children and other relatives.

While commending her soul to the eternal care of God and His heavenly hosts, the clergyman expressed joy that Madam Ireka’s life had impacted so many lives positively, and been an inspirational template for her survivors – notably her biological children (among them Ms.Gloria Ireka, Esq., lawyer and Editor-in-Chief of NEWSWIRE Magazine and www.newswirelawandevents.com), as well as others for whom the departed matriarch had been a veritable tower of support, succour and solace.

Drawing on many Biblical passages and spiritual allusions, the officiating minister concluded his sermon by calling on all who still inhabit this mortal plane to reflect on the illustrious life of Ezinne Madam Ireka and draw the appropriate lessons for their own earthly sojourns, seeing that this life is a temporal experience which will terminate sooner or later.

The reception, which followed the funeral service, was graced by the great and the good from across and beyond the shores of Nigeria, as the people of Awo-Idemili and it’s environs turned out in their multitudes to honour and bid a fond farewell to an illustrious and much-loved daughter of the soil. Members of the Uzoeto and Ireka families, extended kindred and umunna from far and wide were joined by Their Royal Highnesses, Ezes, Ichies and other titled chiefs of Awo-Idemili and surrounding communities; members of women’s groups (many of who were proud to count the late matriarch as one of their number); youth groups, cultural groups and Christian associations, among others.

One and all, they acclaimed the virtues of Ezinne, describing her departure as a huge loss to the families of which she had been such an integral part, to the community, and to the Body of Christ.

In their various tributes, the children of the late Ezinne Comfort Ireka recalled with nostalgia the many unforgettable lessons and indelible insights she had impressed upon their hearts right from their formative years, declaring that though she is no more, it is her timeless presence – rather than her absence – they would feel most acutely as they navigate their own lives going forward.

Born into the family of Pa James Uzoeto and Dame Beatrice Uzoeto (both of blessed memory) on March 4, 1942 in Onitsha, Anambra State, Nigeria, the late Madam Comfort Nlemchukwu Ireka had her early formal education at the St. Simon School in Awo-Idemili, Orsu LGA, Imo State.

Her parents were both traders and farmers from the community of Awo-Idemili.

Following the early end of her formal education, the young Comfort Uzoeto (as she was then) went into business – specifically the importation of various items. It was a highly rewarding occupation which she intensified after her eventual relocation to Lagos.

While still a very young maiden (as was the common practice in those days), Comfort Uzoeto met and married her townsman, late Chief Raphael Ireka, from Ubahaezedeke in Awo-Idemili.

Apart from being a hardworking and industrious businesswoman, Ezinne Madam Ireka was also a staunch Christian and a lifelong adherent of the Anglican Communion. She played a number of important roles and made many contributions to the work of the Anglican church parishes of which she was an active member (in both Lagos and Awo-Idemili).

Madam Ireka was also a matriarch in her extended family, and a highly-regarded community leader.

According to NEWSWIRE’s correspondent, the reception was an event of many notable highlights such as performances and presentation of gifts against the backdrop of evocative music, wining and dining.

The final, sombre highlight of the day was the interment of the body of Ezinne Madam Comfort Nlemchukwu Ireka (nee Uzoeto). The committing of her mortal remains to Mother Earth, and her soul to the bosom of Father God, as presided over by the officiating ministers, was the culmination of the celebration of a long and distinguished life, as well as a long day of tributes and memories of a life well-lived.