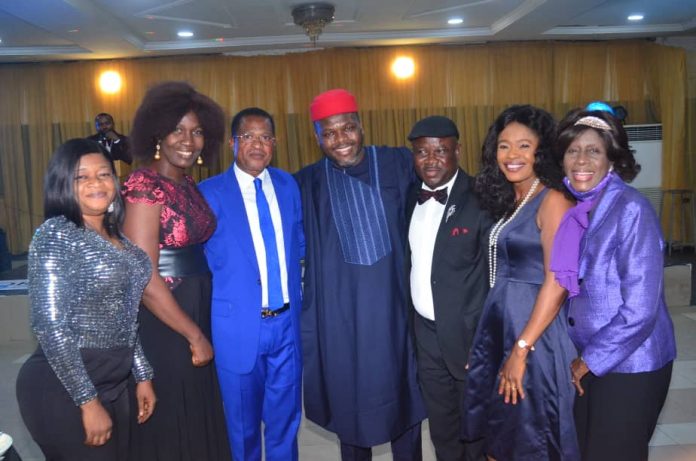 The 2021 Annual Dinner was a fitting finale for this year’s Law Week of the Surulere Lawyers Forum (SLF), which featured activities such as a charity visitation (notably to institutions such as the Bethesda School for the Blind) and the Health Walk, among others.

NEWSWIRE Law & Events Magazine’s correspondent in Lagos reports that the Dinner, held at the Blessing Hall of the Eko Club in Surulere, Lagos, was graced by leading lights in the Nigerian legal firmament – learned Senior Advocates of Nigeria, notably the keynote speaker, Prof. Joseph E. Abugu, SAN, as well as Emeka Ozoani, SAN, Chukwuka Ikwuazom, SAN, and others – lawyers of various designations from other parts of the Lagos Branch of the Nigerian Bar Association (NBA) and other branches within Lagos State and beyond. The Royal Father of the Day, His Royal Majesty, Oba (Dr.) Abdul-Fatai Aremu Oyeyinka Aromire (Oyegbemi II), Oba of Ijora Kingdom, and the chairman of the occasion, Prof. Itse Sagay, SAN, chairman of the Presidential Advisory Council on Corruption (PACAC), as well as the President of the NBA, Mr. Olumide Akpata, were ably represented at the occasion.

In his remarks of welcome, the chairman of the SLF 2021 Dinner Planning Committee, Godwin Eluu, Esq. described the event as a celebration of life, love and togetherness – coming after the cancelation of the 2020 event in response to the global lockdown occasioned by the Covid 19 pandemic. He saluted the administration of the SLF Chairman, Celestine Okonkwo Esq for the body’s proactive interventions around its catchment community, for maintaining the SLF’s tradition of hosting these dinners at zero cost to its members, and for the choice of the 2021 dinner lecture topic, namely, ‘TECHNICALITIES: THE COURTS AND THE ENDS OF JUSTICE.’

The current Chairman of the Surulere Lawyers Forum, Celestine Okonkwo Esq. is the 6th successive head of the body since its founding in 2006 – after its pioneer chairman, Chief V. U. K. Iyanam (later to become the honorable Attorney-General of Akwa-Ibom State); Otunba Martins Ogunleye (later Chairman of the Lagos NBA branch); Chief Frederick Onyeka; Mrs. Chioma Ferguson; and Mr. Yusuff Bello. In his welcome, Okonkwo reiterated the SLF’s longstanding clamour for the reactivation of its Magisterial District, a High Court, and an NBA Branch in the not too distant future, for which, he said, several representations had been made to various important stakeholders such as NBA President Akpata and Lagos State Chief Judge, Hon. Justice Kazeem Alogba. He highlighted the many ways in which the SLF has historically been a trailblazer within the NBA sphere – such as an insurance scheme for lawyers and a health walk, etc. Saluting the legacies of his predecessors, Okonkwo pledged to take these legacies forward and to build on them in the course of his tenure.

The address of the chairman of the occasion, Prof. Sagay, was read on his behalf by a former SLF chairman, Chief Fred Onyeka. This was followed by goodwill messages from various key stakeholders.

The keynote address, which explored the role of technicalities in court processes and their roles in enabling – or impeding – the courts’ ability to ensure the delivery of substantial justice, was delivered by Prof. Joseph Abugu, an expert in corporate and securities law, a prolific author on various matters of commercial law, and a law professor at the University of Lagos.

The university don explored a number of extant laws and judgments as they impact on the delivery of substantial justice in Nigeria. He noted with approval various attempts in the past at far-reaching judicial reforms – notably by the government of Lagos State – and queried as to how far these reforms have gone so far. Prof. Abugu went on to discuss other sensitive issues such as that of jurisdiction in its various dimensions, as well as the doctrine of submission, among others. He ended by lamenting the unfortunate tendency by certain courts to latch on to technicalities in order to subvert the delivery of substantial justice, and called for cases to be determined on their merits henceforth.

NEWSWIRE’s correspondent at the event reports that another highlight of the 2021 Dinner was a short but colourful performance by members of the Bethesda School of the Blind, one of the beneficiaries of the SLF’s community welfare drive. Led by the current winner of the Mr. Blind Nigeria 2021, it was a well-received performance, as it went to prove the truism that there is ability in disability.

This was followed by the fundraising drive led by the SLF Chairman, aimed at soliciting donations towards the purchase of an officially bus to aid the efficiency of the SLF’s operations.
The evening ended with a vote of thanks, which was given by the Secretary of the SLF, Mrs. Nkeiruka Williams, as the floor was finally opened for entertainment and dancing, as yet another memorable event in the short but eventful history of the Surulere Lawyers Forum came to a close.