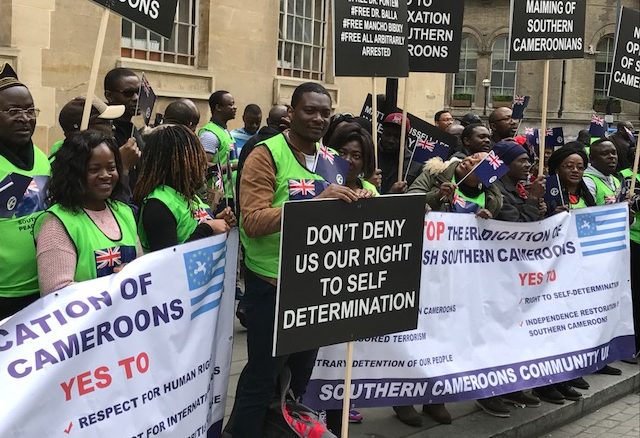 More than 400 people are said to be stranded following the closure of the Nigeria-Cameroon border at Mfum in Ikom Local Government area of Cross River, leaving tales of anguish and pain among travellers.

The Cameroonian authorities had ordered the closure of all entry points, following agitations by the English speaking southern part of the bilingual nation for a separate country, following its allegation of marginalization by the Francophone north.

The threat by Southern Cameroon to declare a sovereign state on October 1, it was learnt, may have prompted the movement restriction across international borders.

Those affected include traders, students and passengers who wanted to cross the border on both sides for their respective businesses Saturday Sun investigations revealed.

An immigration official from Nigeria, who would not disclose his identity, told Saturday Sun that no fewer than 400 people at the Mfum border alone could not cross over to Cameroon or come to Nigeria.

The official said his department was having difficulties controlling the influx of travellers massing at the borders, as the Nigerian government had made no arrangement for housing or evacuating its citizens, even though other foreign nationals had been evacuated by their home governments.

Some of the travellers had spent between three and five days at Mfum border post with the hope that it would be opened.

Some of them lamented that they had stayed without food, water or  conveniences, thereby making life unbearable for them.

They also complained of running short of cash as they had spent huge amount of money paying hotel bills.

Lamenting her plight, a student of Higher Institute of Business Management and Technology, Boyah in Cameroon, Ms. Alele Precious Ezinne, said she was returning to Cameroon from Nigeria only to be trapped by the border closure.

Alele said: “We have spent over a week waiting for the border to be re-opened and we don’t understand the reason for the closure. We are facing challenges of feeding and paying for hotel accommodation. We are really facing hardship.”

Also, a housewife, Caroline Lerin, said: “I am travelling with my two children from Nigeria through Cameroon to Gabon to join my husband after spending the holiday in Nigeria. I have gone through difficulties with my children.” She called for urgent steps to be taken to re-open the border.

A trader, John Nwanaeri, said: “Some of us traders have incurred great losses, as our goods are already going bad and we are not sure when the border will be re-opened, so we can reconnect with our families and carry out our legitimate businesses.”

The priest in charge of Saint Peter’s Catholic Church, Ikom, Very Reverend Father James Mgbado, who has been harbouring some of those stranded, including some Congolese and tourists from Argentina, said most of them who came into Nigeria could no longer go back due to the border closure, said that about seven persons were still under his care out of over 30 who initially took refuge there.

Mgbado, therefore, appealed to the international community to intervene in the development in Cameroon to spare innocent people from suffering.