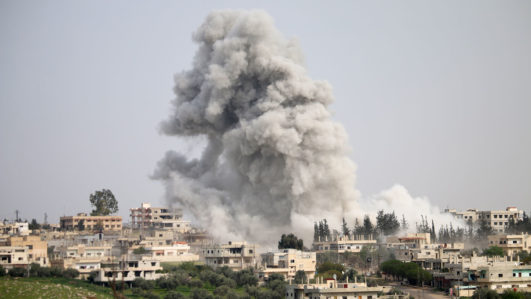 Syria’s war killed at least 3,000 people including 955 civilians in September, the Syrian Observatory for Human Rights monitor said Sunday, in the deadliest month of the conflict this year.

“More than 70 percent of the civilians were killed in regime and Russian air strikes, or in air raids of the international coalition” fighting the Islamic State group, the Britain-based monitor’s head Rami Abdel Rahman said.

Backed by Russian air strikes, the forces of Syria’s President Bashar al-Assad are pressing a battle to retake IS-controlled areas in the eastern province of Deir Ezzor.

A US-led international coalition has been providing air support to a Kurdish-Arab alliance, the Syrian Democratic Forces, also fighting the jihadists in its former northern bastion of Raqa city and Deir Ezzor.

The number of people killed in September was higher due to increased fighting and “intensified air raids of the international coalition and Russia against jihadist bastions in the north and east of Syria, but also due to increased Russian and regime strikes on rebel-held areas,” Abdel Rahman said.

Russian and regime warplanes have in the past two weeks increased their strikes on the northwestern province of Idlib, which is largely controlled by Hayat Tahrir al-Sham (HTS), a group led by Al-Qaeda’s former Syria affiliate.

The 955 civilians killed in September included 207 children, said the Observatory, which relies on a wide network of sources inside Syria for its information.

It said the toll also included 790 regime troops and loyalists, 738 jihadists from IS and HTS, and 550 rebels and SDF members.

Syria’s conflict has killed more than 330,000 people and displaced millions since it broke out in 2011 with the brutal repression of anti-government protests before evolving into a complex war drawing in world powers.