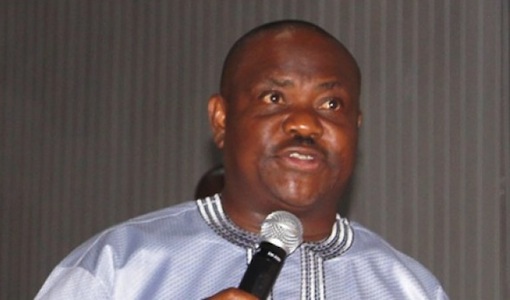 Rivers State Governor Nyesom Ezenwo Wike has accused the All Progressives Congress-led Federal Government of plunging the nation into its worst depth of corruption since independence.

Governor Wike said that the mind-blogging $26 billion monumental corruption unveiled in the leaked memo of the Minister of State for Petroleum brings to the fore the high-level sleaze amongst top officials of the APC-led Federal Government through the NNPC.

He spoke at the Government House, Umuahia on Friday during a state visit to Abia where he commissioned construction equipment and also held a meeting with the Abia State Governor, Dr Okezie Ikpeazu.

Governor Wike said: “When they accused judges accused of corruption, they were told to step aside. They have not told anyone to step aside so that they can conclude investigation. When you are in office, investigation will be compromised.

“It is for Nigerians to see. Are we fighting corruption? The corruption they are fighting is against some people who are their opponents. All of us are victims. I have never seen this kind of scandal in my entire political career. We have never heard of it like this.

“What about this $26 billion (N9 trillion) contract scam and nobody is talking. Everywhere is quiet.”

He said the anti-corruption fight is simply aimed at brow-beating the opposition because the APC has metamorphosed into a monumental failure.

“So many promises were made, but none has been fulfilled. Everyday, what they have to say is corruption, corruption, no other statement. Corruption from day one and corruption till the day they will leave office. What have they achieved? No roads, no infrastructure. I could not come to Abia by road. It is not possible,” he said.

The Rivers State Governor said that PDP is ready to rescue Nigerians from the failure and under-development foisted on them by the APC.

He said: “They are working to see that there is disunity amongst the governors. But we have realised that we must work together because of the country. We will do everything possible to make PDP stronger.

“It is not by propaganda. No amount of blackmail will make the governors to shy away from taking Nigeria to the level Nigerians want it. We are going to work together to ensure that PDP emerges victorious in 2019”.

He said that PDP is the solution to the nation’s challenges, pointing out that all PDP states are working.

He urged the Abia people to continue to support Governor Ikpeazu for greater achievements.

Governor Wike said that the APC Federal Government is in a state of confusion because it has been cursed for meddling in the politics of Rivers State. He said until they confess, they will wallow in confusion.

In his remarks, Abia State Governor, Ikpeazu said that the construction equipment commissioned by Governor Wike will be used to revolutionise infrastructure in the state.

He said that the earth moving equipment will serve the rural communities of the state.

He said his administration has lifted Abia State above her peers in terms of development.

He praised Governor Wike for his commitment to development and good governance.

“I count Governor Wike as a special blessing, not only to our people, but to human kind. I thank God for the kind of courage that he has blessed Wike with. Today, he has come here. I pray that the blessing of Rivers State will follow Abia “, Dr Ikpeazu said.