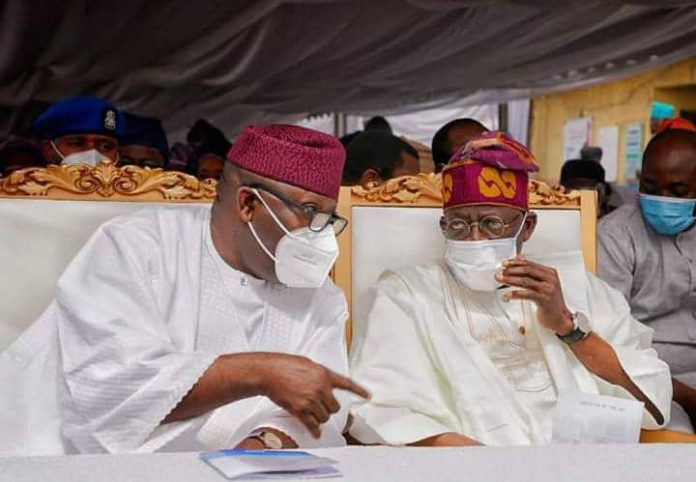 Yinka Oyebode, chief press secretary to Kayode Fayemi, governor of Ekiti, says it is “impossible” for his principal to drop a “rumoured and undeclared” presidential bid for Bola Tinubu, former Lagos governor.

Oyebode made the clarification following rumours that Fayemi had decided to drop his ambition and support that of Tinubu.The reports came after both men held a closed-door meeting on Wednesday.On Monday, Tinubu said he informed President Muhammadu Buhari of his intention to run for the presidency at the 2023 polls.

In a statement on Saturday, Oyebode said Fayemi has not indicated interest that he would run for the presidency, hence he could not have dropped his bid and pledged support to Tinubu.Oyebode said their interaction was “a family meeting of minds” that was centred on national issues.“It was a family meeting of minds. It is therefore disingenuous of the spin doctors who were nowhere near the venue of the meeting to begin to second guess discussions at the meeting,” he said.

Meeting between the two leaders dates as far back as their days in exile, when they were both involved in the struggle to wrest the country away from military jackboot.“What makes the matter worse is that such spin doctors, surreptitiously scrambling for relevance have been weaving, not half truths, but blatant lies into the Tinubu-Fayemi meeting, saying it signposted Dr Fayemi surrendering his undeclared ambition to Asiwaju Tinubu’s declared one.

Specifically, they have been dishing out barefaced and unsubstantiated lies that Dr Fayemi at the closed door meeting ‘debunked the raging rumour of his 2023 presidential ambition and pledged support for the national leader of the APC Asiwaju Bola Ahmed Tinubu’.“The spin doctors were so consumed by their fictional hogwash that they could not consider it an impossibility for Fayemi to drop a rumoured, yet undeclared ambition, even when Asiwaju Tinubu said he was still consulting as to whether to run or not.

It must have been sourced from the rumour mill, or as a beer parlour gist. At its best, it is a mere conjecture.”The aide added that while Fayemi is currently focused on developing Ekiti state, he would not hide his ambition if he is interested in running for the presidency.