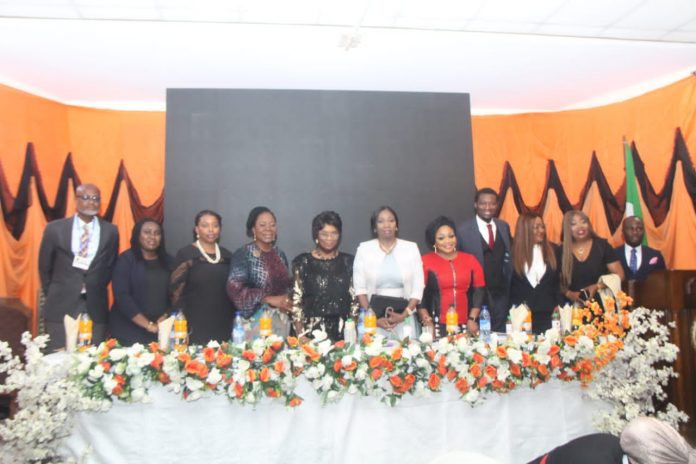 The serene ambience of the Nigerian Institute of International Affairs on Victoria Island, Lagos was the ideal setting for an intellectual exchange designed to enhance the profile and fortunes of a demographic group whose latent strengths, though proverbial, have so often been overlooked. Coming on the sidelines of the Annual General Conference of the Nigerian Bar Association (NBA) in the nation’s former capital, the 2022 Annual Parley of the African Women Lawyers Association (AWLA) Nigerian Chapter was an attempt to generate a ‘Bold Transition’ in the affairs of women, the girl-child and other vulnerable groups in the society.

According to NEWSWIRE Law and Events Magazine correspondent in Lagos, the Parley, whose theme was, “Sustainable Development for Women – Catalyst for the Growth of a Nation,” had as the Chairperson of the Day, the legal luminary, Chief (Mrs.) Abimbola Williams Akinjide, SAN, and was graced by the AWLA International president, Mrs. Mandy Asagba, as well as the respective representatives of the First Ladies of Lagos and Edo States, the Chairperson of the Nigerian Army Officers Wives (NAOWA), and the pioneer Chairman of the NBA Section on Business Law”.

In her welcoming remarks, the President of AWLA Nigeria, Mrs. Efe Etomi reiterated the goals of the Association, namely, to enhance the socio-economic status of women, ameliorating the plight of the female gender – especially the inability of a disproportionately large number to access credit and other financing; covert and overt discrimination; poor medication. She recalled the evolution and achievements of the Annual Parley since its inception in 2017 (incidentally at this same venue in Lagos). Etomi paid tribute to the Chairperson of the Day, whom she said has given over six decades of her life to the legal profession, and to the Keynote Speaker, Mrs. Abike Dabiri-Erewa, whom she praised as one of Nigeria’s greatest broadcasters ever – male or female. She also described her husband, George Etomi (Principal Partner of George Etomi & Partners, GEPLAW) and the panelists at the Parley, lawyer and business coach Mrs. Sola Sowemimo, as well as former Lagos NBA Chairman, Omoyemi Lateef Akangbe, FCIArb, and a one-time African co-Chair of the International Bar Association, Anthony Atata, whom she described as ‘men blessed among women.’

In her goodwill message, Lagos State First Lady, Dr. Ibijoke Sanwo-Olu asserted that no nation can achieve meaningful development while undermining the status and aspirations of its womenfolk, adding that ‘real men give women wings to fly.’ In light of this, she saluted her husband, Lagos State Governor Babajide Sanwo-Olu, who was recently named a United Nations ‘He for She’ Ambassador.

Also speaking, Chairperson of the Day, Chief (Mrs.) Williams-Akinjide, SAN, praised AWLA for beaming a relentless searchlight on the status of gender parity, and urged the body to continue to help make the light of female lawyers and their sisters elsewhere shine for all to see.

In her keynote speech, Hon. Abike Dabiri-Erewa, a former Member of Nigeria’s House of Representatives who currently serves as the CEO of the Nigerians in Diaspora Commission (NIDCOM) who is better-known as a popular television anchor, stressed the difference between ‘equality’ and ‘equity’ and insisted that she, for one, was fighting for the latter (rather than the former, because women were not in competition with men). She urged women to leave their comfort zones and seek out challenging opportunities to prove their mettle. Dabiri-Erewa, who spent three consecutive terms in the Green Chambers, challenging women to demand a seat at the table of critical decision-making and policy, especially in matters affecting their gender. This seat, she said, wasn’t a favour, but a necessity for the greater good of society – women being proven catalysts for peace and social order. She also emphasized the urgent imperative of nurturing time-tested moral values in the next generation, a role she said women are uniquely qualified to perform. Turning her attention to political engagement, Dabiri-Erewa recalled her own travails in the political space, and praised the support of spouses like hers, especially on the tough issues. Playing on the theme of the 62nd NBA-AGC, she urged AWLA to help bring about a BOLD TRANSITION in the nation’s leadership paradigm, beginning from the larger Nigerian legal community . “Why not a female NBA President?” she asked in conclusion. “Why not a female state Governor, or President?”

Dabiri-Erewa’s keynote was followed by the scheduled panel discourse. The first speaker, Seyi Sowemimo referenced her experience as a farmer and entrepreneur in giving her fellow women, particularly those desirous of toeing a similar path, the following advice:

In his brief summation, the second panelist, Yemi Akangbe said there was a thin line between equity and equality; equity, afterall, means equality under the law, he said, as well as equality of opportunities for advancement. Maintaining that internationally-ratified human and gender rights protocols, including Item 5 of the UN Sustainable Development Goals (SDGs) are already part of our relevant laws in Nigeria (in one form or another), he said the critical question was: Where are we now? For a start, he said in answer to his own queston, there is greater awareness – a positive sign of progress – and called on AWLA to partner with others to build on that. Stressing that the quest for gender parity wasn’t the same as competition, Akangbe urged women to ensure that the culture of gender parity begins in the home – by ensuring that children are not assigned roles on the basis of gender. That way, he concluded, the quest for gender parity in society would look less and less like an illusion.

The third panelist, Tony Atata dwelt on the question of affirmative action for the female gender as far as opportunities in education, health, business and political participation are concerned. Yes and no, was his answer, as he explained that it presupposes the inferiority and incapacity of women relative to their male counterparts. Oftentimes, he said, what looks like an advantage for a woman is usually a booby-trap set up by male-dominated interests who will then claim, when the woman trips and falls, that she had been given an unfair advantage to start with. What is needed, Atata affirmed, is a LEVEL playing-ground for all, irrespective of gender. That has proved more beneficial to the cause of female empowerment, he said, than affirmative action.

The panel discourse was followed by one of the highlights of the day, namely, the presentation of special awards to personalities and organizations whose support has impacted the work and objectives of AWLA positively over the years. They include the aforementioned Mr. George Etomi; the venerable Chief Sam Amuka, publisher of the Vanguard Newspaper; Mr. Albert Emeka of Legal Pedia; as well as law firm of George Etomi & Partners (GEPLAW) and Unilever.

Another highlight of the day was the raffle draw which produced two winners – Atinuke Kudaisi and Chinyere Iyke Ohaegbulem.

The event came to a close with a vote of thanks by Mrs. Bolatito Animashaun.